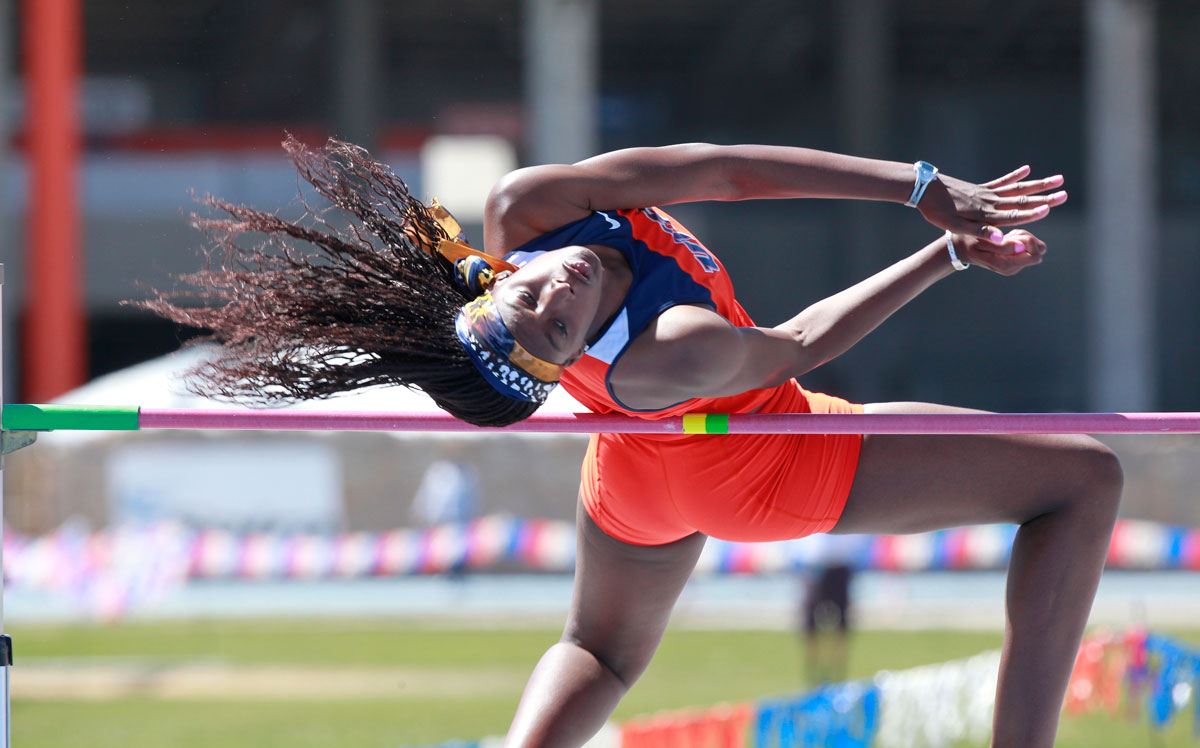 EL PASO – As a track athlete since age 11, Tako-Khady Niare has participated in highly competitive high-jump competitions around the United States and in her native France.

But when she moved to El Paso in January 2010 when she was 22 years old to join the UTEP track team she said she confronted one of the biggest obstacles of her life.

“The process to be ‘accepted’ was one of the hardest things,” said Niare who spoke little English when she applied for her international student visa to study in the U.S. “I had to fill out lots of papers and pass two tests,” she remembers.

She said that a friend connected her to recruiters at UTEP because for the longest time she had wanted to find a good university and an especially good coach in the United States. The UTEP track team needed a high jumper and Niare jumped at the opportunity.

Her family’s support in every move helped her gain confidence in her ability to adapt to a new home, complete her accounting degree and compete in track.

Also, a great help came from Bob Kitchen and Kebba Tolbert, who where her coaches at UTEP who pushed her in the classroom and on the track, she said.

“They also kept track of my grades as an athlete. My teachers are supposed to submit a report at the midterm,” she said. “Also, if the student is in danger of failing, they will contact your coach to find alternate ways to help us do better. Plus, we also have access to tutors throughout the semester.”

Now, thousands of miles away from her hometown of Cergy in France, Niare has adapted to her new home in El Paso, Texas, learned English and Spanish and has changed her perspective on life.

For Niare, moving to El Paso had its “ups and downs.”

One of the biggest differences between her native country and the U.S. is the size of El Paso’s Mexican community.

“In France we do not have a Mexican community, so to me I didn’t know anything about the culture here in El Paso,” said Niare, the youngest of three siblings.

Getting around El Paso was one of the hardest things for her to do. She described that in Paris they have more public transportation than anything else and here “you need a car to get around.”

But unlike other international students coming from Europe, Spanish wasn’t completely new for Niare.

“Spanish is really close to French, so understanding the language was not hard,” she said.

“It was hard at first because of the accent… It took me four months to really understand and be able to answer,” she said.

Standing at approximately 6 feet 4 inches tall, she no longer competes but continues to pursue her accounting degree at UTEP and also volunteers with the Student Affairs Department and with UTEP sports.

“I placed for conference all three years here at UTEP and the team won the conference USA championship in 2010. I also qualified for regionals in 2011 and could have gone on to nationals,” said Niare. “I couldn’t finish my season because of an knee injury.”

Having the confidence to overcome and succeed in a place that is foreign to her has definitely changed Niare’s life.

For Niare the plan in progress is to graduate in December 2013 with a degree in accounting and finance. After that, the next step is to take the CPA exam and then start her own firm.