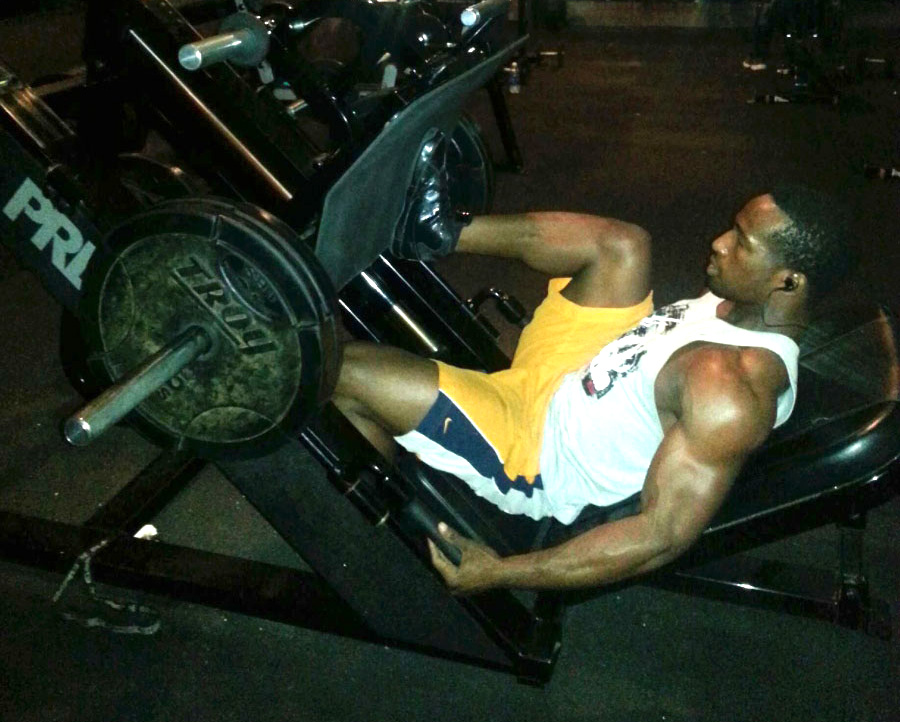 Johne at the gym on "leg day". (Cristina Quinones/Borderzine.com) Johne Green at the gym on "leg day". (Cristina Quinones/Borderzine.com)

EL PASO – A young man in his early 20’s, wearing a tank top, earphones, and shorts puts down a pair of weights and sweating, calmly looks up at his own reflection in the gym mirror.

He’s been lifting weights since he was 18 and today Johne Green is a competitive body builder.  On August 31st, he was awarded 1st Place in Novice Middleweight and 5th place in Light heavy weight open division at his first competition in the Sun City Regional Qualification trials.

Green admits that when he was first introduced to lifting, he was not interested; “My father always worked out, so he tried to get me to work out too. I wasn’t really into it until I was about 17, and then I began really getting into lifting and keeping in shape.”

Now just a few years later, Green is a fitness enthusiast and an amateur body builder.  After years of lifting, his colleagues and friends began asking him for advice to help them reach their fitness goals.  He offered his advice, and training free of cost to help out, and because he loved staying in shape.

Soon enough, people began prompting him to begin competing; “I had no intentions of competing at first, but when people started suggesting it, I just decided to try it, why not?”

In the Sun City Regional, weighing in at 180 pounds he was eligible to compete in the “middle” weight class.  “I wasn’t nervous during the show. I was nervous the weeks prior, but once I was there I wanted to get it over with. I was nervous but not-nervous at the same time.” The weeks leading up to the competition consisted of a strict schedule, on top of going to school and working at Fred Loya Insurance as a Network Specialist, he stood committed to working toward his competition. This included getting spray tanned, strict “clean” eating, and many hours working out in the gym. “You have to get spray tanned to show off your muscles, it makes you look more defined,” Green explained.

At the competition, he was measured against several other competitors based on muscle definition, size, and body build. “I was placed in the middle as soon as I got on stage; it’s supposed to mean that you won because they are comparing you to the other guys they place next to you. I stood in the middle the entire time on stage.”  Green’s friends and family kept assuring him that he would win 1st place, and sure enough he did.  “When they called my name I was so surprised, I couldn’t believe it! I was really happy,” Green said.

Green works out hard on a normal day-to-day basis. He has memberships that allow him access to three different gyms. The main one that he likes to attend, “Show Offz” is open 24 hours. He works out consistently five to six times a week, for various lengths of time. His workouts consist of weight training, to tear muscle and build lean muscle mass, and some cardio, especially during “cutting” season to cut his body fat percentage.

Right now, he is coming off his “bulking” period, which is a strategic eating plan to build lean muscle mass. “You basically eat more calories than your body needs of healthy fats, proteins, and complex carbohydrates. This will make you gain weight, you will gain some fat, but that’s why you have a cutting period after a bulking period,” Greene explains.

It takes more than being a fitness enthusiast to be a competitive body builder. Tony Macias, the manager of Show Offz gym says that Green has the motivation and determination to do well as a competitor. “Johne is very motivated. Anything he sets his mind to he does. Even outside of working out, he is a very focused person. He always works out hard, 100%”.

Green’s food for the week, mix of chicken and broccoli, all weighed and portioned. (Cristina Quinones/Borderzine.com)

Some days leading up to the competition, he spent five to seven hours a day in the gym, focusing on weight training and cardio. Competing for shows requires dedication to not only work out, but also in dieting. “To compete, you have to eat clean all the time. You have to work out pretty much six days a week and you can’t slack off” Macias says.

Green plans his meals every week and buys proteins and supplements in bulk. “I go to Sam’s, and buy chicken and fish usually. I try to make meals for the week so I stay on track,” Green explained.

Green plans to continue to compete. “Right now I am weighing in at 196 lbs. I am going on a cutting period, but there is a competition in Mesa, Arizona coming up in the spring that I am interested in competing in,” he said.

The feeling of competing values more than just being fit and showing off your muscles. For Greene, it’s about the reward of knowing you worked hard, and achieved a goal.

“For me, working hard toward something for a long time, and then achieving a goal is unexplainable.  The feeling of accomplishment, there is nothing like it.”