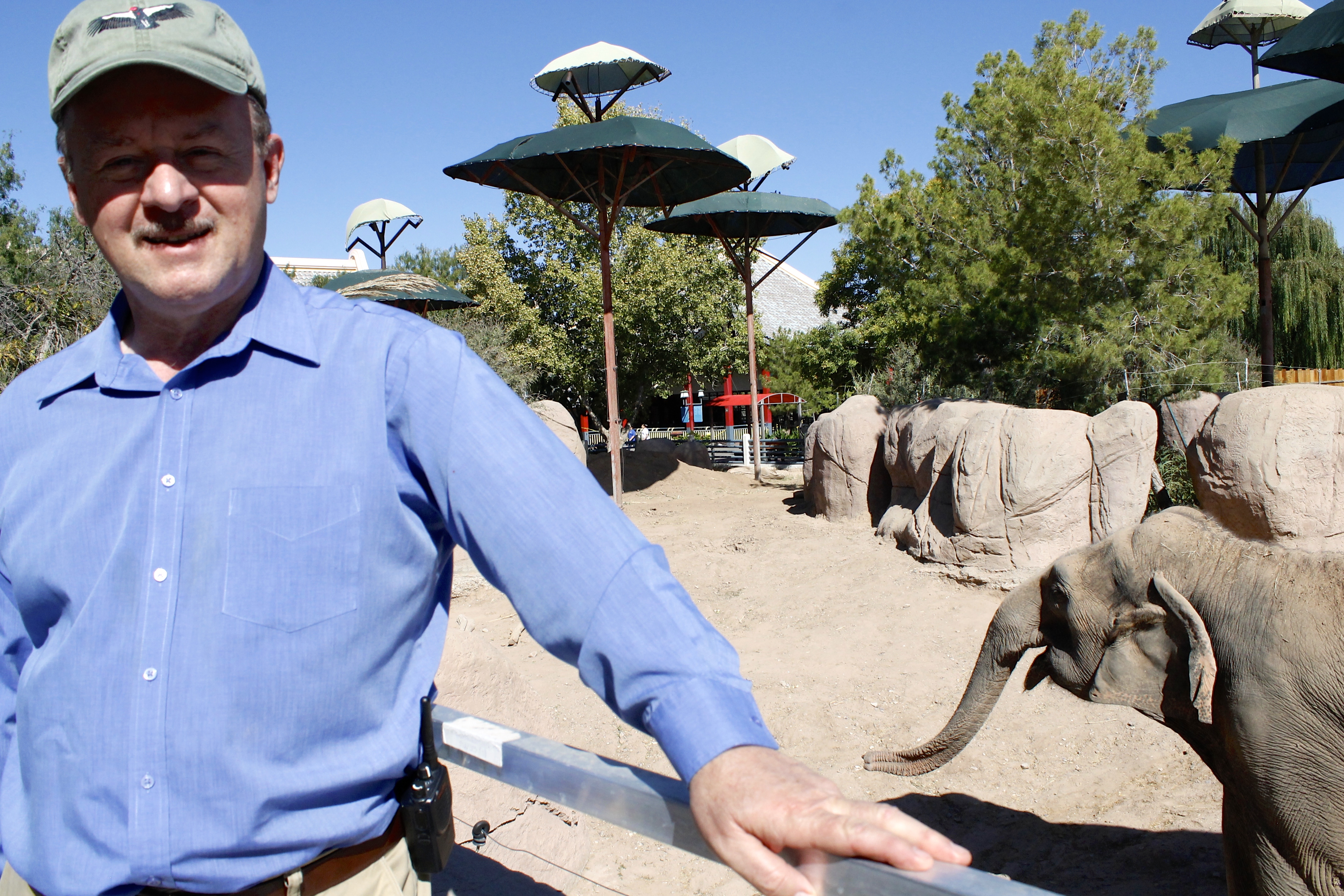 EL PASO – As a child growing up in the northeast part of the country, Rick Louis LoBello fell in love with wild animals when mountain gorillas jumped out at him from the pages of National Geographic. Today as the El Paso Zoo’s education curator, he shares that childhood fascination with new generations.

LoBello, 60, grew up two miles from Lake Erie. As a child he spent his days bird watching, searching for salamanders along the creek and reading about nature in Angola, New York.

“I could get on my bicycle, go down to the creek and study the animals,” he fondly reminisces his childhood years. “I was the only boy in my family that had a desire to protect wildlife rather than hunt for them. Deer and turkey hunting for example are still popular activities among all the men in my family.”

As he grew up, it seemed like his life was going to be far from the nature. He acted and sang during high school, and then he graduated from college with a degree in Education – fine arts and biology.

But while LoBello worked on his master’s degree in Biology, one of his friends acquired a job as a ranger in Yellowstone National Park. In 1972, he made the first of countless trips to the park.

“It was then when I decided I wanted to be a ranger,” said LoBello who explained he diligently started working towards fulfilling all of the requirements for the job.

He took the job even though he really wanted to work in Yellowstone. Eventually, he worked the summers in Yellowstone and winters at Big Bend.

Shortly after that, he moved to Carlsbad, New Mexico, where he took a job as part of the Guadalupe Mountains Association. He said he already had El Paso Zoo on his mind and while there, he bought a home in El Paso while renting one in Carlsbad. Ten years later he took on the job of education curator at the El Paso Zoo. Rick LoBello talks to a student from the Immanuel Christian School during a recent visit to the zoo. (Lucia Quinonez / Borderzine.com)

“I want to involve people in conservation. I don’t want the zoo to be a place where you just come and see,” he said.

LoBello started the Elephant festival in 2002, in memory of Mona an elephant that lived her life at the El Paso Zoo. Through educational programs and activities the weekend long festival celebrates the life of elephants around the world.

The zoo provides daily programs that include the giraffe feeding, along with the African lion encounter, elephant encounter and the Orangutan presentation. They were originally meant as training programs for the keepers at the zoo but they have been turned into educational programs for the public.

“We want people to connect with our animals,” said LoBello. “We want to touch them emotionally, so that they have empathy for these animals. If we can get them to be empathetic then hopefully they’re going to want to learn more and maybe do things in their lives to help these animals.”

One of the issues that LoBello has tackled at the El Paso Zoo includes the avoidance of palm oil products and doing as much as possible to lessen human impact on the environment. Palm oil has come under attack by environmentalists because vast areas of the rainforest are being destroyed in order to make space for oil palm plantations. During this deforestation process many orangutans are killed along with other wild animals that make these places their home.

As part of their educational program the El Paso Zoo recently sponsored the release of an app called the “Palm Oil Guide and Scanner” that is available for download from the App store and Google Play. The application helps consumers scan products to determine if they contain palm oil and are recommended for purchase.

Closer to home, LoBello’s says he wants to ensure that the contract education staff presenting the zoo’s fee based education programs is paid directly through zoo revenues rather than having to depend only on city appropriations.

“The challenge we have at the zoo right now is coming up with the best possible program with the resources that we have available,” he said.

Right now, he says, he would like to maintain his current level of full time staff and hire contract staff for longer periods.

“If someone were to say to me, I have 1,000 students that want to go to the zoo and I don’t have enough contract staff to present a fee based program, then I might have to say no if did not have staff available” he said. “I’ve never had to say no to that situation but I am always preparing for it.”

Although LoBello might prefer to be outside with the animals, he doesn’t appear to feel out of place when speaking about conservation in an office or in a meeting.

In addition to his work at the zoo, LoBello is on the board of directors of the Chihuahuan Desert Education Coalition, an active member of the Sierra Club, and works as the website designer for the Franklin Mountain Wilderness Coalition.

In his speeches it is apparent that his childhood experiences molded his enjoyment and appreciation for nature.

“Knowing that protecting that which is important to humanity is the best way that I can give back,” he said.

At the same time, he is quite alarmed by the high rate of the destruction of the earth’s environment and its animals. He hopes that through the zoo, along with other conservation programs, people will start taking daily action to protect the animals and the planet.

“I would be very concerned for my children’s future if I were a parent.”