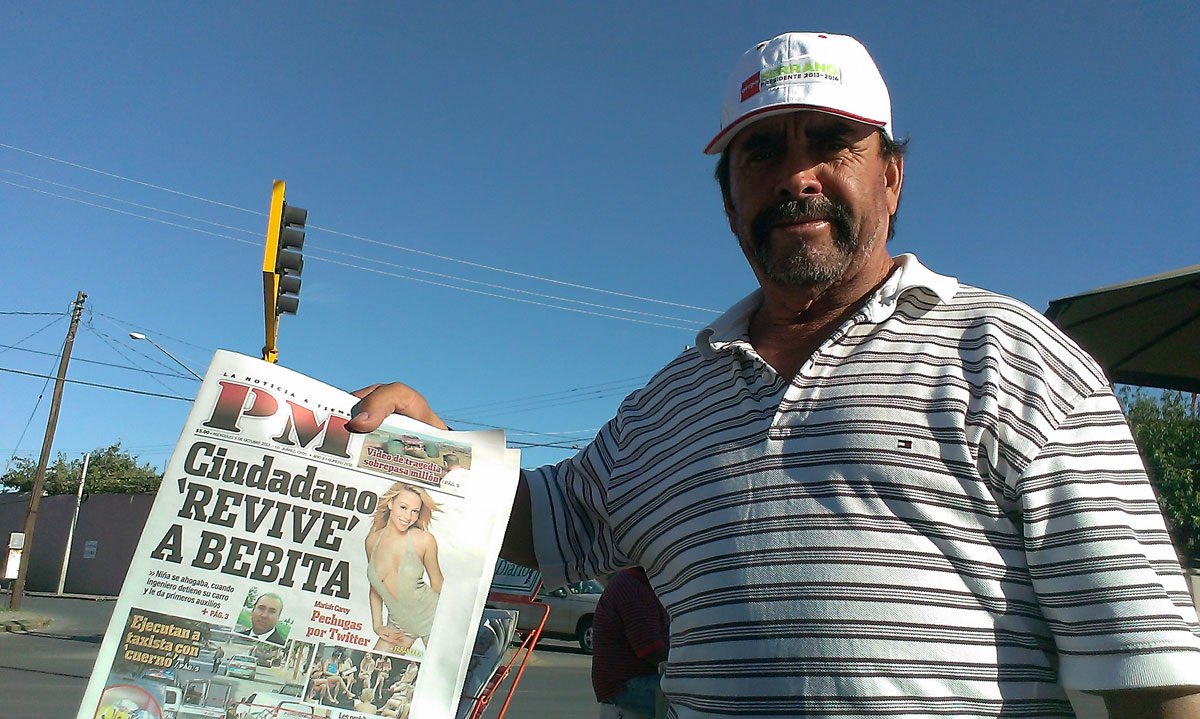 JUAREZ, Mexico – A few days after her 15-year-old son Juan was shot in the head by armed men, Mayra Carrizales remembers driving along a street in Juarez and glancing at a newsstand. She flinched when she saw the mocking front page headline in PM a Juarez tabloid – “Se lo descuentan!” which means “Wasted!” – and then she realized the picture beneath it was of her son’s bloody and battered face.

“Every time I remember my boy, that photo pops out in my mind against my will,” said Carrizales, in Spanish during an interview in her home in the Las Torres neighborhood of Juarez. “It’s like somehow my memories of him had been tainted.”

Juan Nuñez was murdered in 2010, presumably by rival gang members who dumped his body in an empty lot near the Juan Gabriel freeway. To date nobody has been arrested. His story is one of many documented by some of Mexico’s most popular tabloids, including PM in Ciudad Juarez, that do not shy away from covering murders, kidnappings and other crimes in a graphic manner.

According to NMSU librarian Molly Molloy, the total number of daily homicides in Juarez for 2010 is estimated to be around 10, the highest ever during the local drug wars. PM’s co-founder and editor Alejandro Teyes said the newspaper was founded in August 15, 2005 as a project propelled by a “need of a quick, very graphic yet digestible news telling.”

Although the initial audience was working class folks, “All kinds of people from all the social strata are consuming it now,” said Teyes, who adds that he is still impressed by this “phenomenon.”

According to Teyes, PM has a daily circulation of 62,000 copies, close to the approximately  70,000 of Juarez’s main newspaper, El Diario, which belongs to the same owners.

One of the reasons for its success could be its price. “It’s the cheapest, fastest way to be informed,” said Adrian Perez, a casual consumer of PM who can buy a copy at almost every traffic light for the low price of five pesos, or less than fifty cents.

Yet besides its affordability, the use of slang language, its long section of jokes, and the center spread of a scantily clad woman in a sensual pose, there is only one factor that can account for rising sales – graphic violence, according to Teyes.

“It certainly reflects in our numbers when the cover picture is highly graphic,” said Teyes. “Strangely, it is what people ask for the most, a rude, strong image; to a certain extent it’s within our nature to get to know another’s misfortune.”

Dr. Pamela Rutledge, a renowned media psychologist and director of the Media Psychology Research Center in Boston, MA, explained via e-mail that this attraction to violence is nothing more than a survival instinct.

“People pay attention to negative events because our brains are wired to notice threats as a biological drive for survival,” Rutledge said.

Rutledge warns that this “skew towards violence in the media causes people to believe the world is more dangerous than it is.”

Since 2008 Mexico has experienced a typhoon of murders, kidnappings and extortions that, according to Teyes, is “transforming us as a society.” He explains that since what he calls “El Caldenorazo” – alluding to former president Felipe Calderón – society is affected by all this violence and he is “just reporting what is happening.”

José Luis Jáquez, professor at the Universidad Autónoma de Chihuahua, in his article “La Prensa Amarillista en México” argues that sensationalistic tabloids like PM, La Alarma and El Metro in Mexico City; La I in Tijuana or El Centinela in Mexicali are “gradually desensitizing the perceptions of its readers.”

A butcher at Carnicería Cuéllar in Juarez called “Chuyón” by his friends, said he realized he needed to stop reading PM because he was “no longer affected by what was happening.”

But Teyes says the content he publishes is a faithful rendering of what is happening out in the streets,” like anyone who was there at the scene would have seen it.”

Teyes said he is aware that someday it might be him on the cover page of PM, and it would be painful for his family and friends to see (the image). Yet it will be what “truly happened.”

Nayeli Durán, student at the Universidad Autónoma de Ciudad Juárez, said that when people read about or view images of violence, their first reaction “is not empathy, it is curiosity. It seems that whatever the source, we simply find bad news more interesting than good news,” she added.

Miguel Soliz Castillos owner of a hamburger stand in Juarez has a different opinion. “What I see really wrong with this is the comercialization of death, not only by the PM but of all the local bussines that advertise in its pages.”