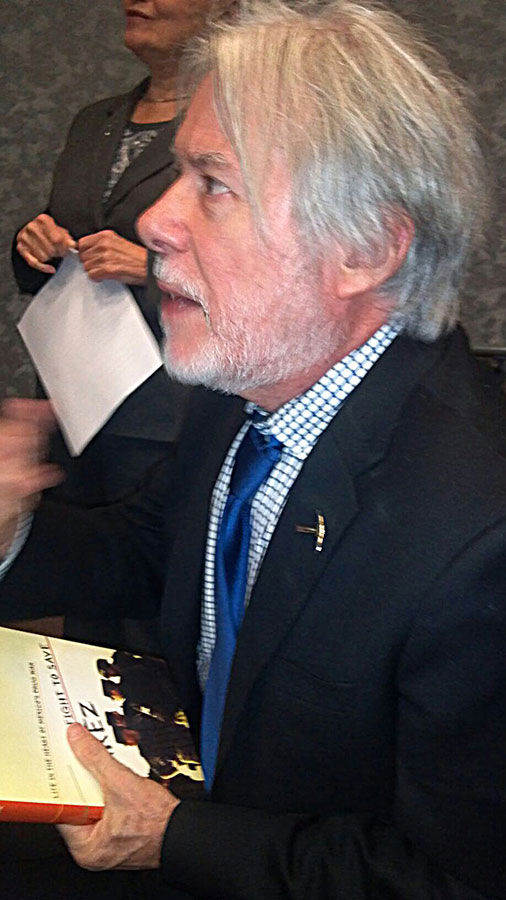 Ricardo Ainsle at a lecture at the University of Texas at El Paso October 22. (Patricia Acosta/Borderzine.com) Ricardo Ainsle at a lecture at the University of Texas at El Paso October 22. (Patricia Acosta/Borderzine.com)

EL PASO – Ciudad Juarez has been “ground zero” for the violence raging in Mexico over the past half decade according to Ricardo Ainsle, a psychologist-psychoanalyst and author of the book The Fight to Save Juarez: Life in the Heart of Mexico’s Drug War.

“Close to 60,000 lives have been claimed by this brutal drug war in Juarez and the future of Mexico’s drug war has gone global,” Ainsle said at a lecture at the University of Texas at El Paso October 22.

To combat the drug cartels, the Mexican government sent 12,500 federal army police to the city, which represented 20 percent of all troops nationwide, he said.

Ainsle added that the number of drug war-related causalities in Ciudad Juarez during the same period of time was 60,000 and represented 20 percent of the national casualties.

“Nearly 20 percent of the country’s drug-related executions have taken place in Juarez, a city that can be as unforgiving as the hardest place on earth,” said Ainsle, who is known for using documentary films to depict subjects of cultural interest. “Mexico does not realize that whatever happens in our sister city will have lasting repercussions for both the United States and Mexico.”

Ainsle’s interest in drug cartel executions and other acts of horrific brutality encouraged the Mexico City native to go to Juarez and see what was happening for himself.

He investigated by traveling into the heart of Mexico’s bloodiest city and speaking to people who experienced the drug war from different perspectives.

Ainsle decided to speak to four people he knew who had experienced the drug war from very different perspectives ­– Mayor Jose Reyes Ferriz, a mid-level cartel’s mistress, a human rights activist, and a photojournalist.

“The dual viewpoint of life on the ground in the drug war and the big picture views of all officials responsible for the war’s strategy creates a powerful, intimate portrait of an embattled city, its people, and the efforts to rescue Juarez from the abyss,” he said.

Ainsle said the major tipping point in the drug war in Juarez was what was labeled as “The Massacre Villas de Salvarcar” in January 2010. Fifteen young teens were killed and many others wounded at a house party in the neighborhood.

“To add to the tragedy,” said Ainsle, “Felipe Calderon, the Mexican President, believed it was gang-related.” However, Ainsle said, “They were middle class working families with well-educated children.”

The lecture ended on a positive note as Ainsle spoke of Juarez’s progress and diminishing levels of violence. “Tax revenue is up; people are shopping and going to movies. They aren’t hunkered down the way they were before.”

Lettie White, an attendee at the lecture said she appreciated the fact that the subject was about saving Juarez, El Paso’s sister city. “I hope people start going back to this beautiful city and embrace the culture and warmth that comes from the people.”

“It is interesting how much more information regarding the subject is of the drug war in Mexico is emerging,” said Maria Martinez, a UTEP undergraduate student. “Therefore the public can be better informed. I am looking forward to reading his current book.”

Ainsle’s book is one of several recently published works about the drug war in Juarez, including The Last Narco: Inside the hunt for El Chapo, the World’s Most Wanted, written by Malcolm Beith; El Narco: Inside Mexico’s Criminal Insurgency, by Ioan Grillo; Even Silence Has an End, by Ingrid Betancourt and UTEP alum Alfredo Corchado’s Midnight in Mexico.