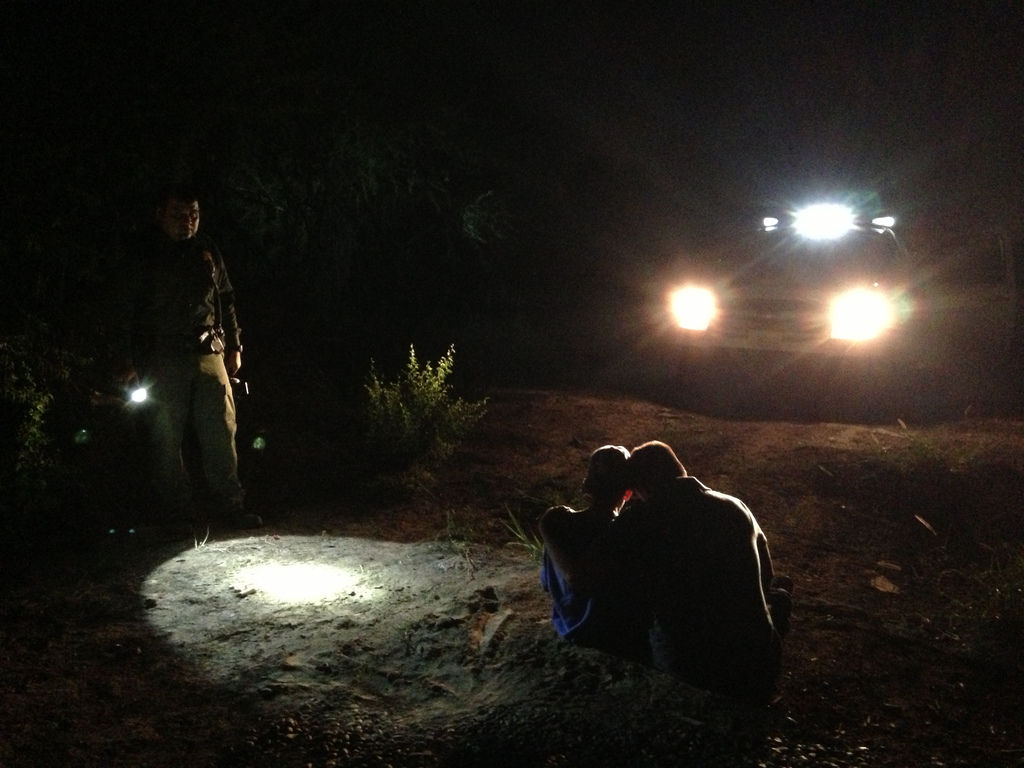 A grandson hugs his grandfather after both were apprehended by Border Patrol in Hidalgo, Texas. (Mónica Ortiz Uribe/Fronteras) A grandson hugs his grandfather after both were apprehended by Border Patrol in Hidalgo, Texas. (Mónica Ortiz Uribe/Fronteras)

A costly game of cat and mouse unfolds nightly along the banks of the Rio Grande in South Texas. The number of immigrants crossing illegally there has doubled in the last four years, making it the busiest section along the Southwest border.

As night fell outside Mission, Texas in late August the Rio Grande looked deceivingly peaceful under the glimmer of a full moon.

Suddenly through a pair of night vision goggles, a Border Patrol agent spotted movement. He picked up his radio.

On the river ahead of him a mother and her two infant boys floated across on a raft. She scampered onto U.S. soil, but her taste of success was brief. She was apprehended and ended up in the back seat of a Border Patrol suburban.

The woman had traveled from Guatemala. She told the Border Patrol she was on her way to reunite with her husband in the United States. Her fate will now be a detention center and likely deportation.

This year, Border Patrol has detained nearly 200,000 people from Del Rio to Brownsville. While apprehensions across the southern border are at record lows, South Texas is the one spot where the numbers are rising again.

“We could apprehend anywhere between 100 and 200 a shift,” said Mark Foster, a Border Patrol supervisor. “On the weekend its very hard to get all the incursions dealt with, with the manpower that we have.”

In response to the increased traffic the Border Patrol is shifting more manpower and resources, like night vision technology and mobile towers, to South Texas. By the end of this year the Rio Grande Valley Sector expects to have 600 more agents.

Even with a record amount of manpower and infrastructure along the entire southern border, the Rio Grande Valley has the fewest number of agents per mile compared to other places. It also has the least amount of fencing. In some places the only deterrent is a few ground sensors. The unidentified remains of migrants are buried in a Brooks County cemetery in south Texas. (Mónica Ortiz Uribe/Fronteras)

The terrain adds to the challenge of patrolling this section of the border. The Rio Grande swerves and curls downstream like a string of yarn. Access is limited by gravel pits, cliffs and delicate wildlife refuges. There are also private residences and farmland, where locals can make a pretty profit cooperating with smugglers.

Daniel Perez is a newly minted Border Patrol agent who moved from Arizona to South Texas to start his job a year ago.

“It’s a big change down here,” Perez said. “You got the river and then they come into this jungle gym of a brush that we’ve got here and hiding spaces everywhere.”

Historically, heavier enforcement has pushed immigrants to take greater and greater risks to get to the United States. Twenty years ago, new Border Patrol tactics shifted migrant traffic out of urban centers like El Paso and San Diego to the deadly Arizona desert. Now, for the first time in a decade, the flow coming across South Texas is greater than in Arizona.

Once the migrants make it across the Rio Grande the game of hide and seek becomes increasingly dangerous.

Seventy miles north of the border in Brooks County, Texas, Eddie Canales loaded long metal poles onto the back of his pickup truck. He also loaded a tarp-like blue flag.

Canales works with a network of human rights groups. The blue flag is for a water station he was planning to put up in a nearby ranch frequently traversed by immigrants. Three years ago, Brooks County recovered the bodies of 20 dead immigrants. Last year the number of dead shot up to 129.

Most of those bodies turn up on private ranches, like the one managed by Lavoyger Durham.

“We save lives out here every week,” he said. “You know people have given up … and they’re crawling to my house and knocking on my door saying, ‘Please give me water and please give me food.'”

The immigrants come through his land to avoid the Border Patrol checkpoint on U.S. Highway 281 south of town. In the past two decades Durham has found his share of bodies. A telltale sign, he said, is a circle of buzzards.

“Actually you’re pretty lucky when you find a dead one,” he said. “Because the coyotes and the vultures and the javelinas eat them up. And then they scatter all the bones.”

The majority of those coming across now are from Central American countries like Honduras, El Salvador and Guatemala. Violence in that region has made their lives impossible, they say, so they flee.

Chief Deputy Benny Martinez said last year the county spent nearly $200,000 burying the unidentified remains of border crossers in the local cemetery. There are also smugglers who operate within the county, he said. Recently, sheriff deputies stopped a U-Haul trailer stuffed with 70 migrants.

“They are on U.S. soil so it becomes our issue,” Martinez said. “This is where we need to step up and start doing something more proactive to where we can avoid these deaths out here.”

This year the body count is already at 70. At this pace Martinez believes Brooks County could end up with more dead than last year.

Editor’s note: This story was previously published by FronterasDesk.

Fronteras: The Changing America Desk is an unprecedented, multimedia collaboration among seven public radio stations. It is led by KJZZ in Phoenix, Arizona and KPBS in San Diego, California, and funded by the Corporation for Public Broadcasting (CPB) as part of its Local Journalism Center initiative. From Central Texas to Southern California, and from Las Vegas to the Mexican border, Fronteras covers an area of about 9 million residents and reaches an audience of about 1 million listeners. There are multi-lingual reporters based in San Antonio, Texas; Las Cruces, New Mexico; Las Vegas, Nevada; and in Flagstaff and Tucson, Arizona. In addition, we have three reporters in Phoenix, and two reporters and a social media editor in San Diego. Our leadership includes a Managing Editor in Phoenix and a Senior Editor in San Diego. Fronteras Desk has won national journalism awards and has been recognized by media from around the world for the quality of its work. Fronteras Desk stories deal with the complex and controversial southwestern border with Mexico, including security, immigration, drugs and weapons smuggling. We also seek to show that the border is far more than a smuggling corridor. Our mandate is to broadcast and publish stories from throughout the Southwest that go beyond breaking news and the sensational to find the people and stories that are real, relevant and alive. In the spring of 2011, we produced a groundbreaking series on the Drug War At Home, with 13 multimedia stories looking at spillover violence, cultural impact and the mechanics of moving drugs north. Some recent stories have shown a collaboration in the development of an anti-venom vaccine and the struggles facing Mexican border schools with the enrollment of English speakers. We also explore the changing demographics of the Southwest, including the new immigrants who make up our populations and shape our cultures in a series on the 2010 census. In all of our communities, we are exploring the controversies surrounding redistricting and how new immigrants are represented on the local and national political stage. We're also looking at generational changes in the region and the impacts on our communities in a series of stories called Retirement Redefined. Fronteras Desk is committed to exploring parts of the country and the world off the radar screens of most media. Our reporters regularly travel to northern Mexico, deep into rural Native American reservations, and as far away as Guatemala. These efforts have helped inform listeners across the region how their communities are changing. Besides reaching a diverse audience through radio, television and the Internet, our stories regularly appear in other media, including Marketplace, NPR, PBS Newshour and the BBC. These efforts show that Fronteras: The Changing America Desk is helping set the news agenda for the Southwest.