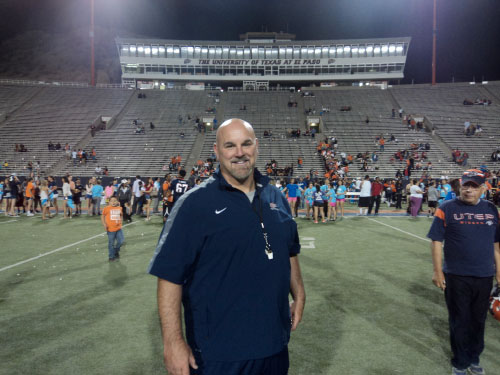 “Our new coach is a real strict guy,” said wide receiver Jacob Garcia a sophomore majoring in criminal justice.  “It’s goanna be a positive impact with the team because we’re going to have more discipline with him and the new coaching staff. It can help the team do our best on Saturdays and maybe win more games and go to a bowl game,” said Garcia. “Our new coach is really good,” said kinesiology major running back Nathan Jeffrey, a junior. “I like him a lot. The new coaches are doing a good job on shaping the team, making the team more disciplined in order to do better for next season. We are really adjusting to him,” said Jeffrey.

“I really like the new coaches,” said freshman long snapper Nick Dooley, a business major.  “This year the team has seen a lot of improvements during spring ball. It’s going to be a positive thing for the team for the rest of the year,” said Dooley.

“I like coach Kugler a lot,” said junior wide receiver Jordan Leslie, an electrical engineering major. “Physically and mentally he has what we need. It’s gonna be good for the team because we will be a more physical team that’s ready to play every Saturday against tough teams next football season,” said Leslie.

“As a team we are all excited about our new coach,” said communication studies senior and quarterback Carson Meger. “Something new is coming in. Everybody starts with a clean slate and gets a new opportunity to show what the team has to the new staff. It brings intensity to them and shows them that they are ready to play. The team is excited but still has a lot of work to do,” said Meger.

“He runs a tight ship,” said multi-disciplinary senior and defensive lineman James Davidson. “He teaches us some plays from the NFL. He is real big on discipline and fundamentals, inch by inch. He makes sure that our grades are on track and we’re doing positive things on and off the field,” said Davidson.

The staff also spoke candidly about the new football coach.

“I am excited,” said assistant UTEP football coach Robert Rodriguez. “When you work in this business you want to work for good people. When you meet coach Kugler he is an extremely tough competitor. He comes across as very intimidating. I am excited as a miner on what he is going to do with the program. There’s a high standard you are going to have to work hard for him but at the same time it’s highly rewarding. It makes my job easier and he also cares about his staff and players. He trying to create a culture that we can all be proud at UTEP,” said Rodriguez.

“So far it’s been really good,” said UTEP Director of Athletics Bob Stull. “I think they (the players) responded very well with a new system and new coaches. But I think they are enjoying it and it’s been fun to watch,” said Stull.

New Head Football Coach Sean Kugler said, “ the kids are working and I think they are really responding on what we we’re trying to do here. It’s a process, every day they getting better, every day they working harder and I couldn’t be more pleased with their efforts.”

With coach Kugler ready to take the stage, players and fans are anxiously awaiting the upcoming season opener on September 9, when the UTEP Miners challenge their longstanding archrival, the Lobos of the University of New Mexico.