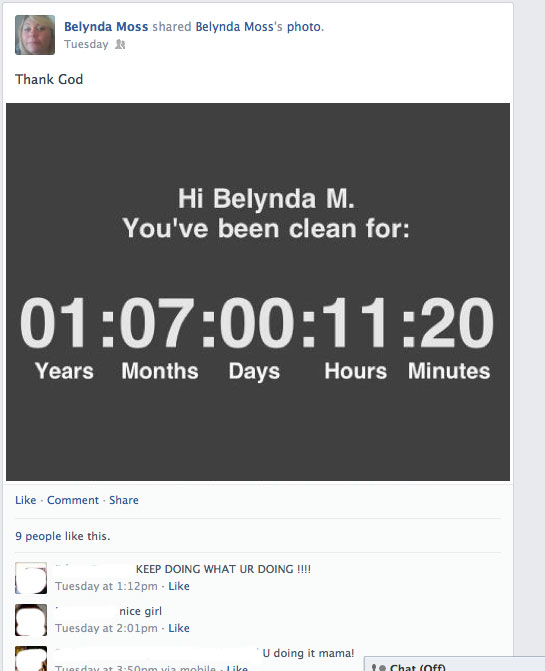 Belynda Moss uses her Facebook page to inform her family and friends how she has stayed clean.

Belynda Moss uses her Facebook page to inform her family and friends how she has stayed clean.

EL PASO – After 27 years of using drugs, many blackout nights and a few overdoses, Belynda Moss, 42, is using Facebook to share updates on her continuing efforts to stay clean.

“I started at age 14 as a pot smoker, graduated to alcohol and became a blackout drunk.  At 18-years-old I did my first shot of heroin and overdosed.” She’s off drugs now, even cigarettes, and has moved from El Paso to Fort Worth where she works as a bus driver.  She’s staying clean by attending Narcotics Anonymous meetings and by using Facebook as a support.

She knew it was time for a change or her life would soon end.

She is one of the lucky few that managed to kick their alcohol or drug habit.

She says she was most likely molested because when she would blackout it would be for about eight hours or so, but who knows because she was on a heroin trance.

“Did that wake me up? No, I began snorting cocaine because heroin proved to be too much for me, for years I drank, smoked weed and did lines till I graduated to the crack pipe,” Moss said.

Moss was stuck on crack for about seven years until she found another high addicting drug, Methamphetamine. She states that after this she started doing lines and smoking and was an ultimate addict, a “street junkie.”

In 2007, Moss, after 27 years of addiction decided to commit to a program called Casa Vida located in 3501 Hueco Avenue here in El Paso. Prior to her commitment she also tried psychiatry and was centered to S.A.F.P., which stands for Substance Abuse Felony Punishment. She attended other rehabs like Aliviane 3 XS and Dempsey Henley unit but none of these methods seemed to work for her.

“Recovery alliance introduced me to Narcotics Anonymous, a worldwide fellowship, one addict helping another really is without parallel. After 27 years of addiction I have been clean 16 months since Oct 15 of 2011,” Moss said happily.

Moss found out about a Narcotics Anonymous 12-step program that saved her life and has now helped her be sober. According to their website, Narcotics Anonymous is an Internet organization that helps addicts through a 12-step program. The meetings are held online or face-to-face. It’s a free online membership and they don’t focus on a specific drug addiction; everyone is welcome. Moss says she started going to the meetings face-to-face because they were much more effective.

Berthaly Lopez, 34, has a similar story, however she hasn’t been as lucky. Lopez is currently a waitress at a local restaurant and says she has tried to be clean before but failed. Unlike Moss, she is still in methadone treatment, which is a substitute for the actual drug because she was also a Meth addict.

“It has been hard for me to get off the drug since I used it since I was 18-years-old, it has caused me to be depressed, but sometimes it was the only escape I found.” Lopez said. “I never thought about help/support online, didn’t seem like it would work.”

Like Lopez, many drug addicts don’t know about all of the options when it comes to local programs that can help them get rid of the addictions. There are new networks that offer you online meetings if you don’t have time because you work or have children.

Mary Ellen Hernandez, 57, has been a local administrator and instructor for drug abuse programs for 12 years. She is also the coalition liaison for the Substance Abuse Collaborative in the Northeast and teaches alcohol prevention classes under the West Texas Education Alcohol Awareness program.

“Nowadays students email me questions they have or advice they might need. I’m open to emails since for teenagers it might be easier for them than just a phone call,” Hernandez said.

Hernandez’ goal is to support funded community based substance-abuse prevention, intervention and treatment services. She also assists with the coordination, planning, and implementation of alcohol and drug abuse programs. With these programs she hopes to increase public and provider awareness of issues related to substance abuse.

Moss uses Facebook as support, in her statuses she mentions how long she has been sober and how she is doing it. She also posts inspiring quotes, friends and family comment on these and “like” the statuses as a sign of support.

Just like Moss, many people have leaned on social networks for support and new ideas on how to stay clean. Not only did she become a member online for Narcotics Anonymous but she also used Facebook to inform her family and friends how she has stayed clean. People there “liked” her status every time she posted how long she had been clean and commented how proud they were.

Other places that help with treatment for drug addiction are:

I'm a junior at UTEP and my major is Multimedia Journalism. I love writing about all types of stories and I certainly love meeting new people!