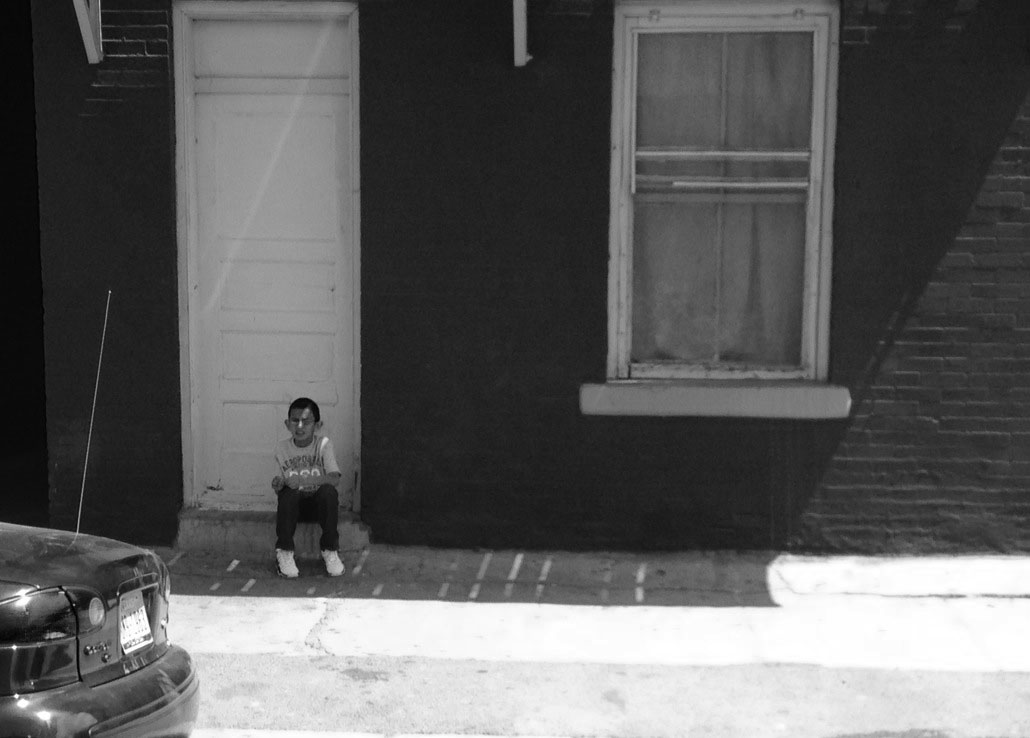 Children are the main victims of family separation. (Anoushka Valodya/Borderzine.com)

EL PASO – With a Border Patrol helicopter hovering close above him, Honduran native Pedro Guzman, who was in his mid-thirties, had to choose between running away or surrendering. After seeing his fellow emigrants detained, Guzman decided to give up, but he still didn’t lose hope. He had spent three days and two nights, without food and water, crossing from Matamoros, Mexico to reach Brownsville, Texas in 1999.

“I was just eating air, but I was always positive, telling myself that I was going to make it,” Guzman said. He paid $4,000 to a coyote, but was later abandoned by the smuggler to find his way to the U.S. along with a couple dozen men. Children are the main victims of family separation. (Anoushka Valodya/Borderzine.com)

Sleeping in the day and crossing at night – not only on treacherous land but also swimming through the Rio Grande –, Guzman said that he and his fellow migrants tried to be as invisible as possible while avoiding venomous creatures, such as snakes, one of which he saw crawling over one of his sleeping friends.

After being detained for days in jail, Guzman was granted admittance into the U.S. because he had received temporary protected status for having been a Hurricane Mitch victim in 1998.

As the U.S. government discusses the hot topic of immigration legislation, millions of undocumented people in the U.S. continue to live in the shadows. As if fearing Border Patrol and the U.S. Immigration and Customs Enforcement agents aren’t enough, undocumented people who are residing in America illegally have other big worries to contend with.

And the same can be said for their families that stay behind in their home country, waiting for their loved ones to return from the U.S.

Fearing infidelity, breaking and starting new families, contracting and spreading HIV, losing children in deportations, becoming a failure and drinking oneself to death – all of these risks have become a reality for undocumented people in the U.S. who are separated from their spouse and children. 10 to 20 percent of families separated because of undocumented immigration would break up definitively for several reasons according to Prof. Ernesto Castañeda. (Anoushka Valodya/Borderzine.com)

The typical Mexican immigrant who enters the United States illegally is a young to middle-aged man who spends seven to 12 years separated from his family. However, the number of cases of illegal immigration into the U.S. has decreased in the past years. According to Ernesto Castañeda, assistant professor of sociology at UTEP, 10 to 20 percent of these kinds of divided families will break up for various reasons.

“Sometimes there’s a stigma that immigrants have HIV,” Castañeda said. “The cases are very low still, but in Mexican towns, in the middle of the mountains, 20 years ago, there was no one with AIDS. Now, maybe one or two of the hundreds of migrants are going to have AIDS because of risky behaviors in the U.S. So these immigrants go back home and infect their wives who want to get pregnant.”

Castañeda elaborated on immigrants who have sex with each other, saying that they’re not necessarily homosexuals.

“In some rare cases, male migrants have unprotected sex with male roommates who share a bed on their day off from work,” Castañeda explained. “They haven’t had sex in a long time,” he said. “So they have sex with each other. At the moment, they’re drunk, they’re sharing a bed, and they think that they’re with their wives.”

According to Castañeda, the women back home tend to be forgiving over their man’s infidelities, except for one area.

“What they fear the most is that their man starts a new family in the U.S. and stops sending remittances. He meets someone from Latin America, moves in with her and starts having children,” Castañeda said. “This happens rarely, but when it does, the man may stop sending money back home and disappears from the lives of his first family. This is doubly tragic and often makes Mexican women emigrate.”

The worry can also be turned around from the man’s point of view as he is separated from his partner for years.

“There’s also this fear among male migrants that the woman has been unfaithful back home” Castañeda said. “It’s not as prevalent because of the children and neighbors present, but it does happen every once in awhile. In Central Mexico and in migrant communities in New York, almost everyday you find a story in the community newspaper of a migrant coming back and surprisingly finding his woman with someone else.”

Another cause of family break-ups among immigrants involves alcohol. Because it’s common for migrants to drink after work to combat their depression of being away from home, not surprisingly, they eventually become alcoholics and subsequently lose their jobs. Communication and the obligation to send money back home ceases with each bottle.

“The man thinks to himself, ‘I can’t go back as a failure. My wife can’t love me like this,’” Castañeda said.

Overtime, not hearing from the migrant, his family back home will suspect that he either died or started a new family. Most likely, the migrant dies from alcoholism, according to Castañeda.

“International migration, accompanied by family separation, is very hard. It’s tragic and sad,” Castañeda said. “There’s very little romance after living years apart from loved ones. Married relationships become businesslike with the husband making the money in the U.S. and the wife taking care of the children back home. After awhile, there are going to be tensions. The couple may be legally united, but they’re living in different worlds with different experiences. It puts real strain on the relationship.”

Gina Nuñez-Mchiri, assistant professor of sociology and anthropology, not only teaches at UTEP but also gives expert witnessing for immigration asylum cases. Last year in Arizona she gave testimony in a case involving a man who was facing deportation even though he was a resident.

“To migrate takes tremendous risk,” Nuñez-Mchiri said. “So once you’re here, you’re not going to want to be detained and deported because you have an obligation to provide for your family.”

Nuñez-Mchiri said that the defendant’s wife, who had been living in the U.S. with her two daughters and husband, lost over 60 pounds in trying to pay the mortgage by working double shifts. Ultimately, they lost the case. The husband got deported.

“It’s so hard because you’re trying to make a case that this is horrible for the parents and the kids, but sometimes, if you’re a U.S. resident and you commit a crime, then you could be deported,” Nuñez-Mchiri said. “A lot of people don’t know that. It’s not until you’re a citizen. Then you have the right to not be deported. These nuances in immigration statuses make people very vulnerable.” This vulnerability has led to family members having to fend for themselves.

“There are real consequences of families being separated through deportations, and there are children who suffer,” Nuñez-Mchiri said. We only know of some cases, but there are thousands of cases – not just in our border community but all over the United States and in other parts of the world where families are fragmented.”

Although it’s been 14 years since Guzman left home, his ties to his family are still strong. He calls his wife every day, and sends money every month to her and their eight children, one of which was a year old when Guzman left Honduras.

In 2005, his 18-year-old son and nephew joined him in the U.S. by also crossing the border illegally. Guzman paid a coyote $12,000 to bring them. Guzman now has a visa through work and plans on bringing the rest of his family once he gets his residency papers.

Recently, Guzman, who has become an advocate for migrants’ rights, has met farm workers who were part of a labor permit program, and he said that to this day they endure harsh working conditions. The U.S. government, he added, should step in to prevent this problem.

“They have told me that the laborers, who work in the fields of grapes, strawberries, and onions, have died from thirst, heat exhaustion, and the cold,” Guzman said. “The government should worry about these workers. They have dignity, deserve respect and justice. The government should have professional guardians protecting these workers in the fields, making sure that they don’t die or return home sick.”

Nuñez-Mchiri vividly remembers a heartfelt moment that she witnessed in the U.S.-Mexico border of Calexico-Mexicali.

“One of the most precious images I’ve ever seen is people holding on to each other through the wire mesh,” Nuñez-Mchiri said. “There’s this little spot where people drive and they get off their cars and people come and meet their family members, and they put their hands up against the wire mesh. I say to myself: that’s border love.”