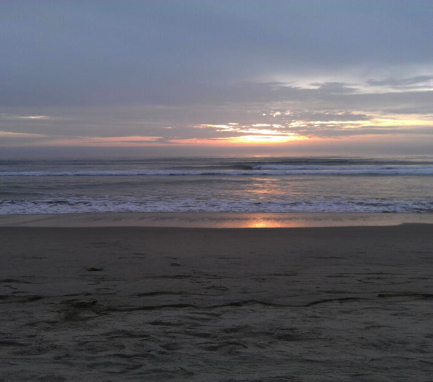 The Cailfornia Beach at sunset. (Courtesy of Stacie Aguilar)

EL PASO – The Baptist Student Ministries at the University of Texas at El Paso changed venues from South Padre Island to San Diego for its annual spring break mission at the beach this year, but the purpose of the trip remained the same – to talk to people about the gospel while having fun.

The BSM is a well-known student organization that has been at UTEP since 1955. They spread the good news and the gospel of Jesus Christ on campus, serve lunch to students every Wednesday, which helps fund the student missions, and every spring break they go on a missionary trip to the beach. A California beach at sunset. (Courtesy of Stacie Aguilar)

For the past five years they have been going to South Padre Island in South Texas on the Gulf of Mexico to help out with other Texas BSM organizations, but this year due to the Texas spring break being the week before UTEP’s, they went to San Diego.

“The biggest reason we are going to San Diego is we wanted a change of pace and to expose the students to another part of the country,” said BSM Director Chris Smith. “We partner with two local Christian churches, called the Rock Church and the Horizon Christian Fellowship Church because there is opportunity for us to help them out with their outreach program and serve the community of San Diego,” said Smith.

BSM intern Josue Lugo said the mission gave the BSM the opportunity to serve the community of San Diego and give the gospel to people while at the beach.

“What I learned about the trip is that you always depend on your strength but you have to trust on God, if you simply focus your own walk with God and love others, those around you, then God will open doors for you to be able to share his love and his word,” said Lugo.

On the Saturday of spring break a group of 30 men and women climbed into church vans at the BSM for a 15-hour trip to San Diego along on Interstate 10 west from El Paso to Casa Grande, Arizona, then along Interstate 8 south taking them directly to San Diego.

“We met some people and talked about the gospel and good news”, said Math Education Junior, Jon Roman. “We went to the beach and met people and, if they wanted to, they talked about their beliefs and we had some discussions with them but we were not trying to convert them” said Roman, adding that one thing he learned about the trip was that, “in San Diego some people don’t believe in God but they are more friendly.” UTEP students having fun while giving the Good News at the beach. (Courtesy of Stacie Aguilar)

“We went to the beach to talk about God,” said Geology Senior Lydia Benitez. “We left El Paso early Saturday morning, came to San Diego late Saturday night and went to church on Sunday morning. During the mission at the beach we did beach evangelism by having some fun, by playing some games like beach volleyball, soccer, frisbee and swimming in the beach, and served the homeless of San Diego by giving them the good news and praying for them so they can have some hope,” said Benitez.  “I learned I wanted to talk to everyone, God allowed me to sit back and pray for everybody. We were spiritually and physically strengthened to serve for a wonderful week,” said Benitez.

Computer Science graduate student Joshua McKee said, “I learned to be friendly and be less shy. I did a lot of evangelism in San Diego. One day I rode in the trolley with my BSM group telling the commuters about the good news and the gospel. We did the same thing at the beach, and also visited a Christ-oriented fraternity at San Diego State University.”

For one UTEP student the weeklong mission trip to San Diego was a chance to visit her hometown of Anaheim. “I had been praying that the BSM would do a mission in California,” said California native, Kinesiology Senior and UTEP soccer player Tess Hall. “For me, it was a great time to minister to the people of California. I learned about evangelism at the Horizon School of Evangelism and did some beach evangelism. I talked to people about the gospel while having some fun at the same time,” said Hall.

Hall said she visited Anaheim in the last day of the trip and was able to see her parents again and introduced them to her BSM group. She also taught her fellow missionaries to surf at the beach in Orange County. “I learned about the community; to encourage one another to pray, share our faith together. It’s awesome that my parents made the whole mission team feel right at home. But it was good to see my whole family again. As a student athlete it’s harder to see my family or go home,” said Hall.

Sophomore Business major Micah Tveito said he and director Smith made a short two-day mission trip to San Diego last summer to prepare for this year’s Spring Break trip. “I have friends who worship at either the Rock Church or Horizon Christian Fellowship. Some of them are part of the Rock church ministry called Impact. I emailed and called them to see if there was any ministry work that we could do during Spring Break. But this was no party trip. This trip was to serve and learn something. But it was fun to serve,” said Tveito. “I learned that God is bigger than our plans and he worked things out his way,” said Tveito.

For information about next year’s Beach Reach Mission trip contact Chris Smith at the BSM, located on Oregon and University Drive. Chris Smith’s office hours are from Monday through Friday from 8:30am to 4:30pm.