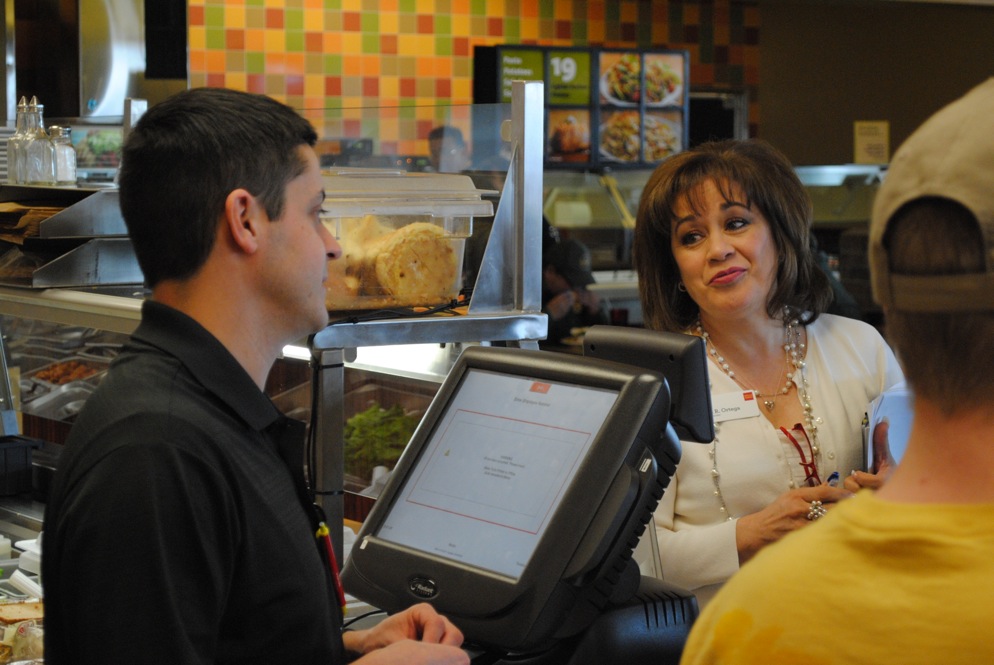 EL PASO – On a good day, he stands about 5’8’. He’s a man with noticeable confidence and charisma. Originally from McAllen, Texas, he finds himself along the Rio Grande once again after working at the Jason’s Deli in his hometown. This time he is in the Sun City managing a Jason’s Deli rather than cleaning dishes as in his first restaurant job with the national company. Fernando “Fern” Perales has the biggest responsibility for El Paso’s newest and much-anticipated restaurant.

Jason’s Deli began in 1976 when Joe Totorice, Jr., president of the restaurant, founded a company that goes by three concepts: people, food and choice. The staff is treated as family. Totorice created a leadership institute to give classes to employees about money matters, ethics, marriage, conflict resolution, emotional intelligence, and the core values of the Jason’s brand.

“We are truly in the people business. Our product happens to be food,” says Totorice on the company website. The nationwide chain is located in 28 states with over 225 locations. It has been recognized for its cordiality toward its employees and customers. Like the congenial staff, Jason’s food will make your body happy with its trans-fat menu. Perales, 29, wakes up seemingly before the sun does and arrives at 6 a.m. to the one job he has been loyal to for 11 years. The restaurant does not open until 10 a.m. As he struts into work, Perales knows exactly what the job requires and what it takes to run this nation-wide chain. His day begins with receiving the restaurants products in the back, preparing the morning deliveries, then will prepare for lunch. He is always moving, greeting customers, preparing sandwiches, taking phone orders; anything that needs to be done. He knows the ins and outs of how the restaurant is managed and what people expect when they go to this award-winning restaurant, including an award from Parents Magazine for best restaurant chain.

He’s climbed the ranks, put in the work, and sacrificed much to get where he is right now. “Every step of the process, I did,” said Perales, who is engaged to the General Manager of the Lac Cruces Jason’s Deli, Tasha Chavana.

Half-way done with college, Perales decided to drop out of the University of Texas-Pan American where he was majoring in Business Management. At the time he was working at Jason’s Deli to pay his way through school with an emergency loan.

“I figured this is what I wanted to do, so I dropped out and stuck with it,” said Perales.

He knew he was taking a risk in leaving behind an education to make it into the management ranks of the restaurant business. He points out with a humorous chuckle that the decision paid off, “a little bit.”

The journey to success is neither smooth nor peaceful, and Perales knows this. He admits he had some moments of doubt: “Not making money, leaving my family behind, questioning my moves, adjusting to new surroundings.” All this loomed in his head while working for the company. Still, he stood with his decision and things have come together for him. “We’re good – now,” he says. Located on the far eastside at the corner of Rojas and Pelicano, Jason’s Deli opened its doors in El Paso in January. The area is prime location in an area of El Paso that is booming with new businesses. The legendary Chico’s Tacos sits in the area, as do a second Chipotle that has just opened up, a Corner Bakery Café that offers the same deli foods, and a McDonald’s, which sits front and center blocking Jason’s Deli. But Perales doesn’t see it as competition.

The customer feedback has been exactly what Jason’s Deli expected in its first three weeks being open, “excellent feedback,” said Perales.

Customers Eric and his son Derek were on their fifth visit to Jason’s Deli and had nothing but positive things to say about the restaurant. “We’ve had a couple issues with order accuracy, but whenever it was brought to their attention, they’ve more than made up for it,” said Eric, who works at a call center and asked that his name not be used. “So I’d say the service has been above par to excellent,” he added.

Derek, excited about being interviewed, interjected: “Well, I say it was good.”

Eric explained that they visited the restaurant the week it opened and the service staff mixed up the order. “They remade everything, and we received a gift card along with a free strawberry shortcake,” he said. What “blew me away,” he said, was that the staff also offered to deliver the food to his house if a similar mistake happens in the future. This is the formula and what the general manager will incorporate as the focal point for Jason’s Deli and what its success will be based on.

Asked what’s next, Perales simply stated, “I’m a company guy, whatever the company wants to do, I’ll do. It’s paid off for me.” The company hopes to open up a second restaurant on the west side of town within a year.