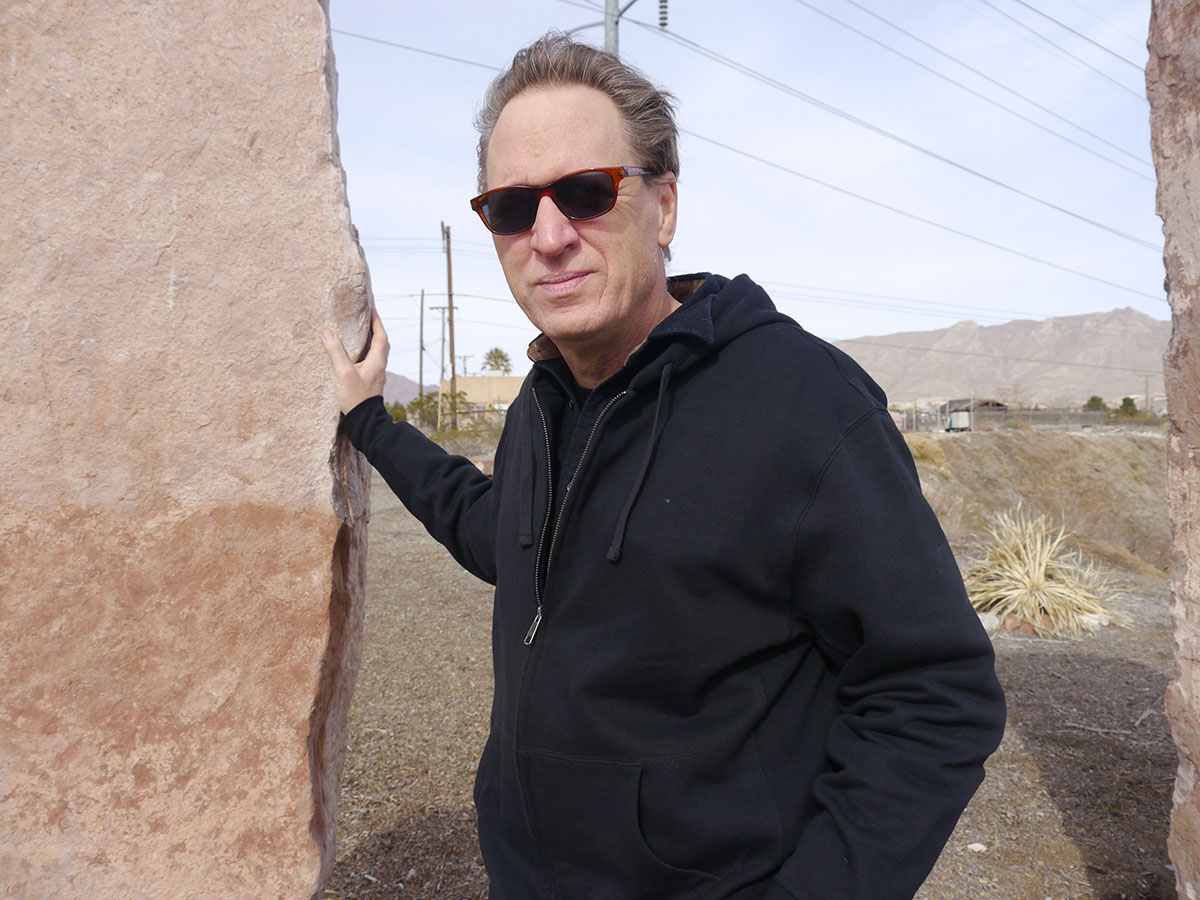 “This whole area I thought was just kind of mysterious for me. I liked the culture. I liked the desert. I found it fascinating,” said Welsh. (David A. Reyes/Borderzine.com)

EL PASO – The watercolor on the wall in Lawrence Welsh’s office gleams with warm sun spilling across the panorama, as if light lived inside every leaf, every strand of grass, every inch of wood and tin. The Associate Professor of English at El Paso Community College said it reminds him of his own deep “digging” for art, poetry and history in the desert lands of the Southwest.

In his new collection of poems written from 1994 to 2009, Begging for Vultures, Welsh sweeps readers through voices and landscapes of the Southwest. His personal excavation began in Los Angeles where he was raised, and where he began uncovering his love for words and music, co-founding the punk rock band, The Alcoholics in the late 1970’s, then writing and editing on newspapers, and writing fiction and poetry. Now, he teaches at the community college.

“He’s my favorite El Paso painter, bar none,” said Welsh, referring to Bill Rakocy who painted “Mogollon Sheds, 1972,” the watercolor on his wall. Rakocy’s work is all about that digging, “… all about soul- the commitment to daily study, painting, and writing,“ wrote Welsh in an article entitled  “A Savage Refinement: The Art of Bill Rakocy, 2010.” “This whole area I thought was just kind of mysterious for me. I liked the culture. I liked the desert. I found it fascinating,” said Welsh. (David A. Reyes/Borderzine.com)

Begging for Vultures has won several awards, including the Southwest Notable Book of the Year award in 2011 and most recently the 2012 New Mexico-Arizona Book Award.

“It was a huge deal to me. I’ve been at this for a long time. You know it’s like the tortoise and the hare. I’ve always felt I’m you know the tortoise, just barely trying,” said Welsh, whose poetry talks to the inner darkness of people, turning struggle into optimism and new beginnings.

“Reading Larry’s poem is like seeing an embankment of rock or a mesa lit by the sunset in El Paso,” said Lex Williford, Associate Professor of Creative Writing at UTEP. “It’s beautiful and stark like the desert itself, but, like the desert the poems, are also places of quiet, of absence. Larry’s work, like the desert he writes about, embodies the contrast between peace and chaos.”

One of the qualities Williford values most in art is authenticity, he said. “Authentic people spend entire lifetimes, however difficult, however pleasant, trying to find out who they really are, unwilling to wear masks just because other people want them to. Larry’s absolutely authentic. He’s just real, an authentic human being and writer, unafraid to be distinctive, unlike anyone else.  When you read one of his poems, you say, ‘That’s a Lawrence Welsh poem.’ No one else could have written it.”

For many writers and artists alike, from Cormac McCarthy to Raymond Carver, Bill Rakocy to Lawrence Welsh and Lex Williford, El Paso has been a sanctuary for “digging”, a place for thought, recollection and purification.

A mere five years later after first hitchhiking to El Paso in 1989, Welsh would be back to “El Chuco” for good, after getting accepted into UTEP’s MFA Creative Writing Program. He says he remembers clutching the fat UTEP envelope that day in Old Hollywood. It was his ticket out of L.A.

“I thought El Paso would be a great place to write,” said Welsh who came into the Sun City on Independence Day, July 4, 1994. “This whole area I thought was just kind of mysterious for me. I liked the culture. I liked the desert. I found it fascinating,” said Welsh who has written several poems about what seems to be some of the very last traces of the Southwest and other pieces of El Paso, Juarez, New Mexico and L.A.

He says he finds peace and meditation in the desert, whether it’s taking a walk down the Paisano stretch near “La Calavera” or hiking up Doniphan, past El Paso Electric to a tiny barrio known as Buena Vista. “The desert in its openness and emptiness is beautiful. It’s a place of timelessness. It’s a place of aspects of eternity. It can be a place of death and destruction.” said Welsh.

“I almost knew right away within the first year when I moved here that this would be a really easy city to die in,” said Welsh, referring to drugs and the nightlife. “I grew up in those worlds, and I know those worlds. And I just wanted to take another path.” He wanted to work on some aspects of purification in the Sun City he said.

When Welsh first moved to El Paso, he says “Old timers” used to pull him aside and tell him to, “Respect the desert. And if you give it respect like it deserves, and you watch yourself, it’ll unfold to you.”

To this day, Welsh writes, discovering something new every day. “No matter who you are, what level or how big you’ve gotten, you know Don DeLillo said that’s the only three things anyone can really count on in life, is a writer’s rejection, rejection and rejection,” said Welsh, who thinks that is the big secret to being a writer.

Whether for temporary pit-stops or career-building stays, people have come to El Paso for various reasons, some by chance, others by destination. For Welsh the desert has unfolded to him in many ways he says, and it continues to do so in his daily dig for words, for the best thing we’ll ever write, might just be the next thing we write.

About David A. Reyes

Double Major in Creative Writing & Journalism at The University of Texas at El Paso. Musician, Poet, Writer of the Borderland