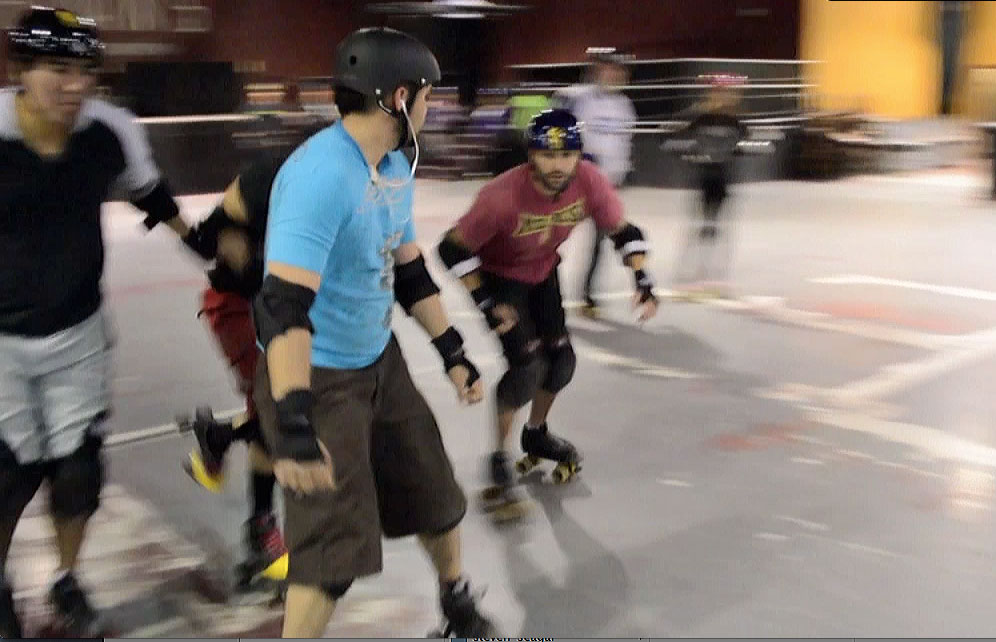 EL PASO – Glares from overhanging lights reflect off of a sprawling shiny concrete floor, as the skaters whizz by poles and stay within the “white invisible lines” of the flat track where they practice. Wobbly players wear their helmets for safety and insignia. One marked with a yellow star struggles to pass the pack, and fumbles through a wall of men who will either block or assist him.

Ivy Ashley Marie Ruiz, or as the derby world knows her, Miss Prettie Poison, is a 23-year-old student at the University of Texas at El Paso. She coaches fellow veteran roller-derby players and the “fresh meat,” which is the six-week derby 101 program for women, and now men, who are trying out for the five-year-old Sun City Roller Girls league. Ruiz is also a founder of the new men’s roller derby team, The Dead Bolts. Ruiz says the inspiration to start a men’s team in El Paso started when her team, The Sexecutioners, headed to Arizona in 2012 and saw men play roller derby in Phoenix. Since October 2012, Ruiz and the Sun City Roller Girls have been cooking up a homegrown men’s roller derby team on the unforgiving floors of the El Paso County Coliseum and Buchanan’s Event Center. The result of their efforts is The Dead Bolts.

The Dead Bolts are composed of active military soldiers from Fort Bliss, men currently pursuing professional careers, students and alumni from UTEP and EPCC. The team is one of only three other men’s roller derby teams in Texas. These men, like the women, risk serious injuries such as concussions and broken bones with every roller derby bout, but remain on the flat or bank track for the fun of the game.

“This sport isn’t just for anybody,” Ruiz says, “there’s a lot of injuries involved.”

After receiving a concussion during a bout causing her to take a break from derby life for two weeks, along with other various minor injuries like nose bleeds, bruises and cuts, Ruiz knows the sacrifices of playing the sport. The Sun City Roller Girls are a Renegade League. “Renegade” in roller derby terms means that the league does not completely adhere to the rules of Women’s Flat Track Derby Association, so harder hits are acceptable during roller derby games, or “bouts.”

“[With] any skater, it’s a risk you take because you love it so much,” Ruiz said.

The Dead Bolts face the same scenarios in their upcoming bouts, and prepare by attending practices that take place two or three times a week sometimes and lasting up to three or four hours.

The men’s first practice, as Ruiz says, was “crazy.” But even with some of the men just learning how to skate, The Dead Bolts were up and swinging in no time, she added.

“The men are like children, they don’t care if they fall and get hurt – I mean they’re out there and they’re ready to hit their first day,” Ruiz says.

Josefina Herrera, or “China Tu Madre,” is a 36-year-old El Pasoan who works in the Department of Defense at Fort Bliss. Herrera is the co-founder and president of the Sun City Roller Girl’s league, and handles the finance and promotions for all of the teams.

Herrera says that because the SCRG’s is a non-profit organization, they donate all proceeds to charities around El Paso. The league partners with Toys for Tots annually for fundraisers, and also uses raffle to raise money for various local charities. Monthly dues paid by individual players, bouts, and merchandise holds the organization together. The Dead Bolts, for instance, pay monthly dues to play and bought all of their own equipment entirely out of pocket, sometimes adding up to over $500 per person.

After the Phoenix trip, a male referee approached Herrera, and the board of the SCRG’s and expressed that he wanted to play. “And that’s where it really started,” says Ruiz. A few recruits for The Dead Bolts were picked up through word of mouth, Facebook or other social media, and three men contacted Ruiz after an appearance on a local El Paso news station. Ruiz said that the recruiting process was not easy, especially considering that roller derby has been widely thought of as a women’s sport since it started in the 1930s. It has remained predominately female-fueled since its revival in early 2000 in Austin, Texas. In a town where “machismo” reigns, she hopes that roller derby will become open to all sexes.

“There are leagues that are for transsexuals only in Mexico… roller derby is getting expressed to all kinds of people,” says Ruiz.

“For these men it’s an opportunity to play a sport [where] there’s only certain men that have the drive to do the sport, and I say that because of the stigma that roller derby is a female thing… to men, it’s taboo in a sense,” says Herrera, China Tu Madre.

In the last four months, The Dead Bolts constantly worked to establish themselves in the rugged and rowdy culture that is Texas roller derby. Future plans for the team are to travel and play other teams in Lone Star State and Arizona, build a bank track (a roller derby track that is oval-shaped, sloped and more difficult to skate), as well as develop roller derby as a men and women’s sport – not one or the other. Ruiz says she hopes it will be easier for the public to accept men in roller derby, especially in El Paso.

“When my men first started they got [criticized] all the time, like ‘you guys are gay’, but no, some of my men are married and some have girlfriends.  You can’t stereotype [them] because they’re on skates,” says Ruiz.

With roller derby encompassing all varieties of people, timid or extroverted, aggressive or passive, new teams or new members continue to be added onto the national roller derby roster every year. The only real requirement, Ruiz states, is character.

“If you can give hits – great. But if you can take ‘em,’ even better,” said Ruiz, Miss Prettie Poison.

This story has been revised to reflect the following change: Ms. Ivy Ashley Marie Ruiz is the correct name of Ms. Ruiz, not Reese.