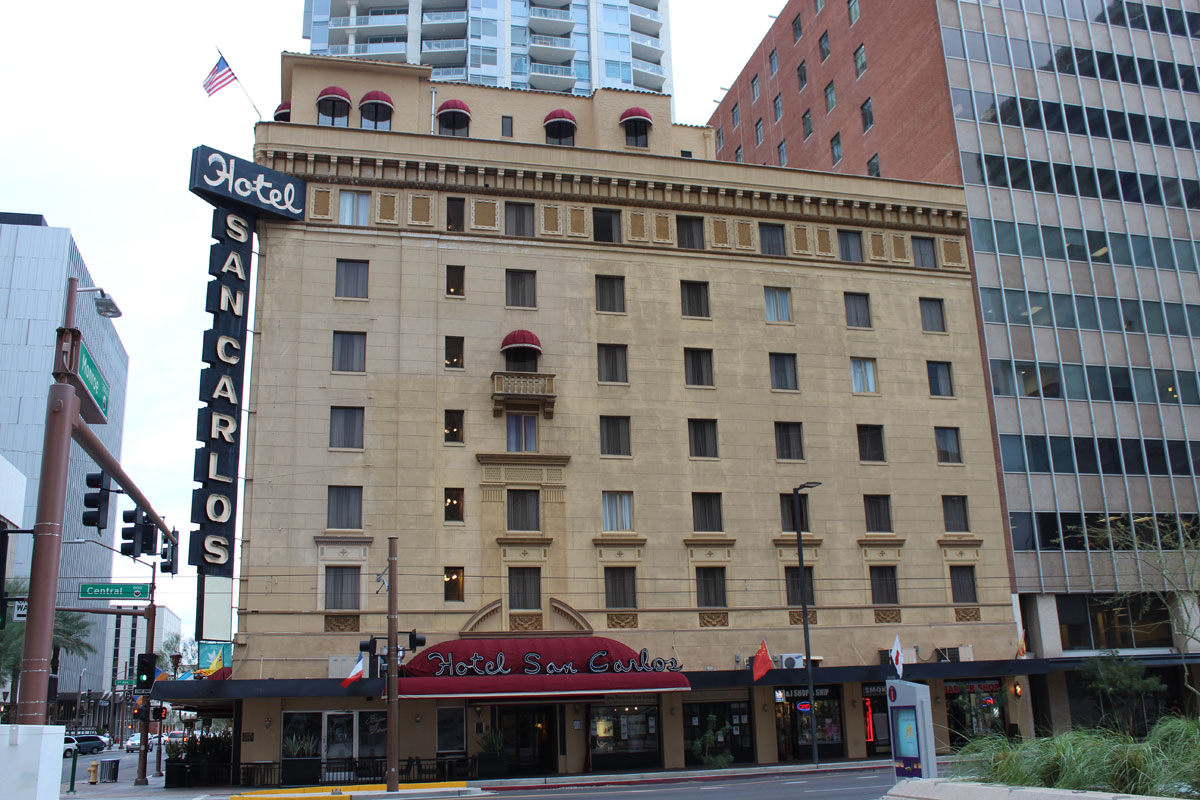 PHOENIX – It was Benjamin Franklin who once said that guests, like fish, begin to smell after three days. Well, what would you think of a guest who has been a non-paying guest at a hotel for over 80 years and shows no signs of leaving or three children who run and play in the halls at all hours of the day and night? The Hotel San Carlos has been a major attraction in Phoenix, AZ since it opened on March 19, 1928. Though it has never been considered a five star hotel, at the time it opened it was considered one of the best places to stay in the area and kept that high class reputation for many years.

Consider if you will, the list of famous guests who stayed at the San Carlos routinely when in the Phoenix area. One of the greatest leading men of the Silver Screen, Clark Gable, routinely stayed in room 412, a corner room where he could watch the foot traffic on the street. Carol Lombard stayed many times, in the room adjacent to room 412. Marilyn Monroe routinely stayed in room 326, the room closest to the pool and the sun deck. Other routine guests included movie mobster George Raft, World War II pinup Betty Garble, sex symbol Mae West, actor Robert Cummings and actress Gene Tierney. The French Café at the San Carlos was considered the place to be seen during the early to mid 20th century and many stars that could not get a room at the hotel made it a point to at least come to the Café for a meal while in Phoenix.

Of course the most famous, or infamous, guest of the hotel San Carlos is not a movie star, or a darling of the media. In fact, if not for her relationship with the hotel she would probably not even be remembered by her family. Her name is Leone Jensen and she was 22 years old at the time she checked into room 720. The few images of her in the hotel show she was rather attractive, though painfully young. She had packed all of the belongings and come cross-country to Phoenix to marry her fiancé who was working as a bellman at another hotel in the growing city. The problem was that apparently he had fallen out of love with her during the time they had been apart and no longer wanted to marry Leone.

Distraught at the rejection, by all accounts depressed, and some say ill, Leone put on the very elegant wedding dress she never had a chance to wear as a bride and made her way from room 720 to the rooftop of the hotel. The owner, Charles Harris, and his family lived in a penthouse on the roof, but somehow she eluded them. Climbing the low parapet, Leone swayed for a moment in the breeze before jumping to her death on Monroe Street.

It has long been said that death ends all earthly problems, but in the case of Leone, this is not so. She continues to relive her last moment, as an eerie figure has occasionally been sighted on the roof. Since her death, witnesses have also reported seeing a woman in white standing at the foot of their beds for several seconds before she walks toward the door and vanishes. The white figure appears friendly, non-threatening, but never speaks.

If Leone does haunt the Hotel San Carlos, she is not alone. It is said that the Hotel San Carlos was built at a location where ancient tribesmen worshiped an ancient god of knowledge. Appropriately, on this same spot the settlers of Phoenix erected the first school building in the city, originally called the Little Adobe and later the Central School. In the basement of the Hotel San Carlos is the original well that was used in those early days. When the basement of the hotel was dug deeper in 1927, some believe the spirits of three children were apparently disturbed and are now heard running through the hallways of the hotel, though their laughter is heard most often in the basement area. The original well beneath the Hotel San Carlos. (Ken Hudnall/Borderzine.com)

Legend says that the voices of the young boys are those of three Native American children, two brothers and a friend. The three had been playing with a ball that accidentally went into the well. The three boys scampered into the well after the ball and ultimately drowned in the underground stream that runs beneath the city of Phoenix.

Management at the Hotel San Carlos very graciously let me wander the hotel, taking photos and gathering information for this story. Their only request was that I make it clear to readers that while there does seem to be something in the basement, the boys did not drown in the well as so many people whisper. Though their spirits do date to the area of the Little Adobe, there is no evidence that they actually drowned in the well.

Many hotels across the great land have stories of hauntings that the owners try to hide from the public because they fear if guests will not want to stay there. Other hotel owners think their ghost stories will draw curious guests. The owners of the Hotel San Carlos open their doors to anyone with an interest in the stories of ghosts that walk the halls of the historic hotel. To be sure there have been guests who check out in the middle of the night when confronted by Leone Jensen in their darkened rooms, but for the most part she seems to be a polite ghost and appears to pick her “victims” carefully. Basement of the San Carlos where boys are heard. (Ken Hudnall/Borderzine.com)

The Hotel San Carlos still opens its doors to guests, though if you are looking for ultra modern surroundings you will be disappointed. The halls, rooms and even the bathrooms are much as they were in the 1940s. That being said, it is, in the opinion of this writer, a gem in the faded crown of Phoenix. In a city of some very modern looking sky scrappers, many of the surrounding older buildings are empty, under renovation, or being retrofitted for other uses.

If you want a taste of history and the chance to see Ms. Jensen, the Hotel San Carlos is the place to stay. There has even been one story that Marilyn Monroe still enjoys the pool and the sun deck. Though I tried to catch her for an interview, it would seem that she is still a little camera shy.