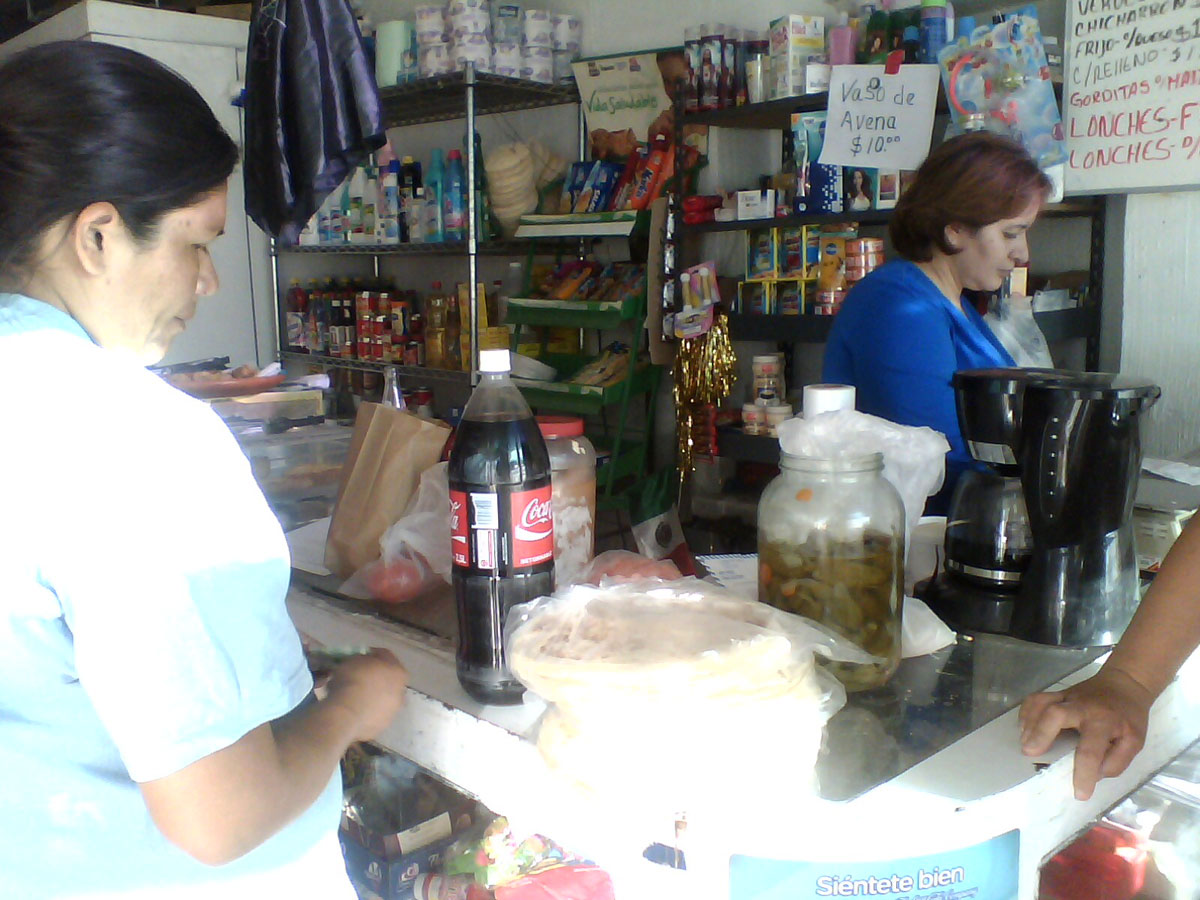 Patricia Martinez (right) reopened her business, Pacífico bakery, after two years of having it closed due to threats. (Alejandra Barrera/Borderzine.com) Patricia Martinez (right) reopened her business, Pacífico bakery, after two years of having it closed due to threats. (Alejandra Barrera/Borderzine.com)

CIUDAD JUÁREZ – Patricia Martinez welcomed two men into her “Pacífico” bakery in downtown Juárez one late afternoon in December 2010. She greeted them with a smile as she did with all her customers without imagining that the encounter would change her life forever.

Martinez thought they were just customers shopping for some pan dulce or homemade food. While Patty – as her friends and family call her – stood behind the counter, one of the men approached her holding a gun in his hand and, told her in a hushed voice that they were demanding “la cuota,” an extortion payoff.

The man said that if she wanted her family to be safe and her businesses to remain open she had to pay 2,000 pesos, or around $155, every week. “The men threatened us with a gun and gave us a phone number to call in order to set the day when they would come get the money,” said Martinez, 52, who resides in East Juárez.

After the threat, Martinez was forced to make the most difficult decision of her life. She closed the bakery that had belonged to her family for three generations. This September, almost two years after the incident with the armed men, the Martinez family reopened their bakery in the midst of some signs that the violence in Juárez is ebbing and the city could return to economic prosperity.

Pacífico bakery is one of 6,000 businesses that according to Hispano.com had to close due to extortion and the drug violence that has plagued in Juárez since 2007.

In many cases, men and women thugs brazenly walked into small businesses and threatened to burn them down and harm the owners and their loved ones unless they met extortion demands.

Juárez police investigating extortion cases found out that the drug cartels usually were not involved. Police attributed the crimes to corrupt security officials and other criminals who were taking advantage of fearful merchants. The extortionists arrested admitted taking advantage of the climate of fear created by drug violence to commit their crimes.

Like the Martinez family, many small business owners in Juárez, who for years had supported themselves with the profits from their businesses, had to radically change their lifestyle and seek other ways to make a living. “My husband took a low paying job as a security guard at a supermarket,” said Martinez. “Our income diminished drastically overnight – some days we did not have enough money to eat.”

Not all businesses have closed their doors during the last five years. Consuelo Payán was able to keep her small beauty store, Novedades Payán, operating even though she feared being a victim of violence every time she opened her doors in East Juárez.

“We haven’t received any threats, but since the violence started, our sales decreased 50 percent.” Payán said. “People were afraid to go out because they could get robbed or get injured in the middle of a shooting,” she added.

Almost 11,000 persons were killed during the last five years in the Juárez drug war, but the city seems to be getting back on its feet, according to news reports and statements by public officials. According to recent articles in the Mexican newspaper El Norte, some 1,770 small and medium businesses have reopened during the last 10 months in Ciudad Juárez, despite the economic recession that was generated by the drug cartel violence.

A recent article in the El Paso Times noted that during the first six months of 2012 slayings decreased by 59.8 percent compared to the same period in 2011. Cesar Duarte, the Chihuahua state governor has said that residents feel safer and are venturing back to the streets for business, work and entertainment. Juárez Mayor Hector Murguia Lardizabal declared in his last public address that after being labeled the “deadliest city in the world,” Juárez has returned to being the “land of opportunity” it once was.

During the fourth annual Summit for Culture and Value, Marisela Morales, the attorney general of Mexico, said that the decrease in violence is due to the cooperation among the three branches of the Mexican government and support from civil society.

But Payán and Martinez, who struggled to keep their businesses from collapsing during the intense period of drug violence, do not agree with statements that crime is receding and streets are safer.

“I reopened the bakery because of need, not because I feel safer,” said Martinez. “I don’t understand why the authorities are saying everything’s starting to change. I know some business owners that are still paying the cuota.”

Payán, like many other skeptical Juárez residents, believes the city has not changed at all. “The mayor and the authorities say everything is changing because they have bodyguards and they drive armored vehicles. There are still many criminals out there threatening small business owners. I do not feel safe.”

Residents and government officials disagree about the city’s progress toward peace. The authorities attribute the declining murder rate in the city to their efforts in the war against drug traffickers. But a recent article in the Washington Post states that the number of deaths related to violence has decreased 54 percent because Mexican drug lord Joaquín “El Chapo” Guzmán has won the war against other drug cartels in Juárez.

Oscar Sáenz, a radio journalist in Juárez and El Paso correspondent for 860 Radio Noticias, said that authorities couldn’t confirm or deny that El Chapo Guzmán won the drug war because there is no evidence to support that claim.

“The rumors that claim El Chapo won the drug war in Juárez are not based on any hard data,” said Sáenz. “It could also be possible that the government reached an agreement with the drug lords, but these are only rumors spread among citizens who no longer believe in the government,” he added. “Small businesses had the biggest economic downfall due to violence, but the city is starting to gradually progress. I believe it is important to point out not only the negative things that happen in Juárez, but also the positive opportunities for the economic development of our city.”

According to Sáenz, small businesses continue to struggle while larger enterprises like nightclubs and supermarkets are starting to expand. “Some businesses in the entertainment sector are trying to prevent potential customers from traveling to El Paso by implementing new publicity campaigns that reinforce a positive image of the city, although it will take time before we know the effectiveness of these advertising projects.” Sáenz said.

There are small but visible signs of change in Juárez. Children are playing outside again, and there are long lines outside the nightclubs. Also, streets are no longer empty after dark. But residents still remain wary and watchful.  “It will take more than statistics and reports to prove to the people that change is on its way,” said Sáenz. “But soon Juárez will rise again to be the most courageous city in the world.”