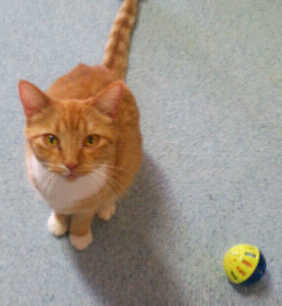 IMPERIAL VALLEY, Calif.–It is difficult to commute from town to town here without encountering any number of dead animals on or near the roadway on any given day; some motorists swerve around the remains, others seem to deliberately aim at the already-decimated animals—dead pigeons on city streets, rabbits or coyotes on rural roads, and countless other carcasses on the I-8 freeway heading east and west between Arizona and San Diego.

But most of the time, the heart-wrenching sight of small furry victims on any local street or major byway are stray dogs or cats whose owners might, or might not be wondering where their pets have gone.

“From June to November, 500 dogs were picked up (both alive and dead), 169 cats (both alive and dead),” according to Beatrice Palacio, animal control supervisor for the Imperial County Public Health Department, which is charged with policing a 4,500-square-mile realm outside of the county’s cities’ limits. “Live roosters and chickens, dead raccoons, dead skunks, coyotes, and a live sheep, for a total of 707 animals.” And that’s only what Palacio has been able to log in a five-month period of 2012, unknowing if the animals were abandoned, lost, or feral.

Holiday generosity and a bad economy S.A.N.D.S. events always include statistical graphics on the value of spaying and neutering pets to stem the population of unwanted cats and dogs. The data comes from Spay USA, which shows the exponential population growth of animals based on one female dog and one female cat in a period of six to 11 years. This poster framed plush toys for sale at the S.A.N.D.S. booth at the 24th Annual Christmas In a Small Town in Imperial, Calif. on Saturday, Dec. 15, 2012. –Photo by Gina Germani

Usually this time of year animal rights organizations often use statistics like those about stray animals to illustrate to holiday revelers how ill-advised impulsive buys of pets as Christmas gifts can be for recipients who may or may not want a furry or feathered friend; who may or may not know how to care for them, or cannot afford to.

“It’s not a good idea to adopt an animal [for the holidays] that might have to be returned to the shelter if the giver doesn’t know if the recipient is willing or able to take care of the animal,” said Kelli Herwehe, a spokeswoman for the San Diego ASPCA. “We don’t advocate giving pets as gifts, because it’s a big responsibility for the recipient.” The ASPCA’s position on pets as gifts offers suggestions on when, why and how to give animals as gifts—if ever.

Locally, however, warnings about giving animals as holiday gifts has been overshadowed by the economy: loss of jobs and home foreclosures that often force families to take their pets to shelters, or worse, just abandon them wherever convenient, and without any care whatsoever.

“The amount of people relinquishing their animals has increased since 2008, because the tough economy has people moving into apartments where pets are not allowed,” Palacio explained. “If a family has to choose between eating another day and feeding the dog, the choice seems obvious.”

Unwanted gifts, burdens on families, or for whatever reason, the problem of strays is unceasing and cruel. And many of these animals will reproduce—exponentially—because they are not likely to be spayed or neutered, and the reproduction rate can be staggering. Spay USA estimates that one unspayed female dog and her offspring can reproduce 67,000 dogs in a six-year period. One unspayed cat and her offspring, about 66,000 in the same time.

Founding a charity to reduce local number of unwanted animals
That sobering reality led two valley women hell-bent on stemming the strays to create the valley’s first organization dedicated solely to spaying and neutering pets, and educating the public about the benefits of doing so.

Spay and Neuter of the Desert Society, or S.A.N.D.S., is a 501(c)(3) non-profit founded by retired teacher Margery Petersen and Sue Colt-Masters, a Rabobank administrative assistant. Peterson said they thought they were up against the initial belief that this border community, by culture, was not supportive of altering an animal’s reproductive system.

“But what we found,” Colt-Masters said, “is given the choice, people want to be responsible pet owners as long as it is financially feasible for them. We had to a find a way to facilitate that.” S.A.N.D.S co-founder Margery Petersen, left, offers samples of baked goods to an attendee of the 24th Annual Christmas In A Small Town event in Imperial, Calif. on Saturday, Dec. 15, 2012. The bake sale booth is one of the spay-neuter organization’s many fundraisers throughout the year. Sue Colt-Masters, pictured in background, is also a co-founder of the valley’s only organization devoted solely to spay-neuter services and education.—Photo by Gina Germani

Petersen found the same thing years ago as a junior high school teacher in El Centro.

“When I was a teacher at Kennedy [middle school], I would have kids tell me they found this kitten or this puppy and their moms wouldn’t let them keep them,” Petersen recalled. “I asked the kid, ‘If I can get [the animal] fixed for you, do you think your mom would let you keep it?’” That approach to placing altered strays in loving homes did pay off to some extent, Petersen said.

“Years later I’d see one of my old students in the grocery store and they would tell me they still have that little black kitty, from something like 10 or 15 years before, and that I helped them get their parents to [let them have it] through spaying or neutering,” Petersen said.

But, that wasn’t enough to stem the overpopulation of strays in the valley. And as a two-woman team and few resources, Petersen’s and Colt-Masters’ efforts at organizing a committed group took more than just a couple of years to get off the ground–mounds of pro bono legal work and stacks and stacks of IRS and state forms. In 2008, the two worked through a network of veterinarians, trainers, breeders, lawyers, and overburdened animal control agencies to develop S.A.N.D.S. as a viable and important organization.

A lot of baking for the cause
Then they found an initial and generous sponsor—the Imperial Valley Kennel Club—that helped get the financial ball rolling in 2010. Their annual budget has grown from $5,000 in 2010 to an expected more than $10,000 this year. Petersen has landed grants from organizations like the Petco Foundation; they make presentations at local service clubs that garner donations; and they do a lot of baking. Chris Sharp, right, offers Sue Colt-Masters, a donation to S.A.N.D.S. at the 24th Annual Christmas In A Small Town street fair in Imperial, Calif. on Saturday, Dec. 15, 2012. Sharp, a Holtville, Calif. resident, said she believes in educating the public about being responsible pet owners by spaying and neutering their cats and dogs. –Photo by Gina Germani

“Everything here our group baked and packaged,” said Petersen, who on Saturday Dec. 15 was helping to man the S.A.N.D.S booth at the city of Imperial’s 24th Annual Christmas In A Small Town street fair. Despite a cold drizzling rain, a rare occasion in this desert region, the booth was packed with people plucking up baked goods, except for Holtville resident Chris Sharp, who instead just wrote out a $50 check to the cause.

“I just had it in my mind that I wanted to give a donation instead so no more unwanted animals will be brought into the world,” said Sharp, responding to the S.A.N.D.S. message that spaying and neutering animals is not cruel, it is responsible pet ownership.

The money raised through S.A.N.D.S. offsets the costs of spay and neutering services provided by two of the valley’s veterinary clinics—Desert Veterinary Group in Imperial, and El Centro Animal Clinic. S.A.N.D.S. offers a “co-pay” for pet owners who want to spay or neuter their pets, and can do so at half the cost of the normal services: $35 for neutering, and $65 for spaying. S.A.N.D.S picks up the rest of the cost.

In its first two years, S.A.N.D.S. has facilitated the spay and neuter of more than 600 animals in the Imperial Valley, a success the group is proud of, but still strives for a strong recognition of the importance of responsibility for animals and the community they live in.

Gina teaches journalism at Imperial Valley College in California’s border county of Imperial. She is an award-winning veteran newspaper and broadcast journalist of more than 25 years and is currently the editor of the start-up online news website, ivnews.INFO , in El Centro, California. She graduated with a print journalism degree from the University of Southern California in 1981 and with a master of science in new media journalism from Syracuse University in 2008.

2 thoughts on “Stemming the strays through Imperial Valley’s S.A.N.D.S.”