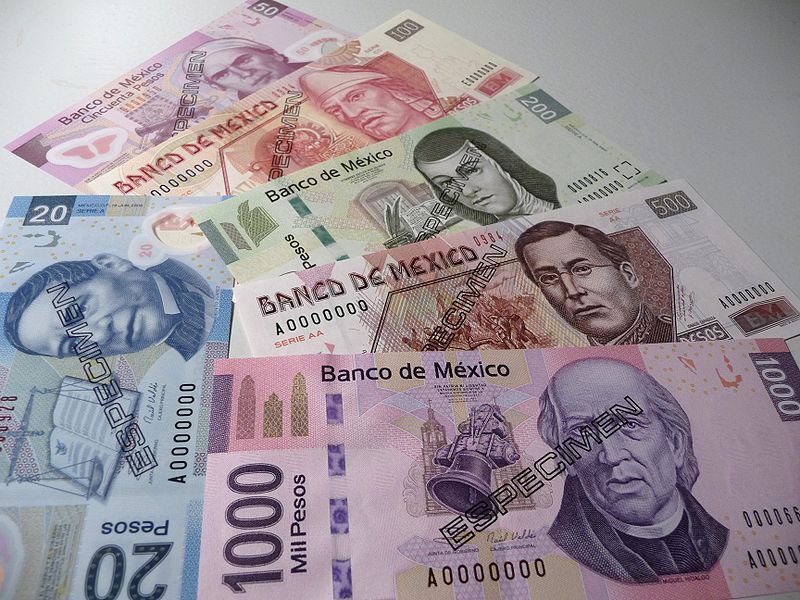 Denominaciones_billetes_mexico by maspormas.com.mx is licensed under a Creative Commons Attribution-ShareAlike 2.0 Generic License.

EL PASO – The Mexican Navy killed Heriberto Lazcano, “El Lazca,” leader of Los Zetas, one of Mexico’s most feared and violent drug cartels on October 7. He had been connected to some 30,000 murders.

According to the Mexican authorities, he owned a ranch where he used to get rid of his victims by feeding them to several lions and tigers.

A plaque on a wall of the chapel in the village of Tezontle, Hidalgo, proclaims the building was donated by Heriberto Lazcano. “Lord, hear my prayer; listen to my cry for mercy; in your faithfulness and righteousness come to my relief,” reads the plaque referring to Psalm 143 in the bible. The bronze-colored marker also states the chapel was built in honor of Pope John Paul II. Denominaciones_billetes_mexico by maspormas.com.mx is licensed under a Creative Commons Attribution-ShareAlike 2.0 Generic License.

According to a CBS news report, Rev. Juan Aguilar, spokesman for the Roman Catholic Archdioceses of Tulancingo, where the chapel is located, said the church was built in 2009 as a community project but the money did not go through the church, which was unaware of who funded it. After the revelation the Archdioceses of Tulancingo, to whom the church belongs, distanced itself from the property while admitting it knows of other donations from drug traffickers. The Mexican Attorney General is currently investigating the funding of the Tezontle chapel for possible criminal charges, including money laundering or “use of illicit funds,” according to The Seattle Times.

This incident and others reported recently by news media highlight a growing concern about the possible flow of illicit drug profits in Mexico to religious institutions to pay for construction, new buildings and even charitable programs. It’s a suspected practice few government or church officials are willing to admit or discuss publicly.

“The penal code does not list church donations as money laundering,” said Kathya Martinez, a lawyer in a prestigious Ciudad Juarez law firms. “Money laundering is doing legal business with illegal money, so unless the authorities can prove that a priest conducted any type of business and lied to ‘Hacienda’ (Mexican Treasury) about the origin of the money you have no case.”

As the number of casualties in Mexico’s drug war continues to climb, the New York Times states that so far a total number of 47,515 deaths have been recorded, and the Mexican Catholic church faces some serious allegations. Some parishes across the country are being accused of relying on generous donations from dubious sources, or “narcolimosnas” from drug lords, according to a report by Angela Kocherga on KVUE TV in Austin. Bishop Ramon Godinez of Aguascalientes, in a recent interview with Televisa said priests have no control over who gives money and don’t investigate the origin of donations.

“Of course the cartels donate money,” said Godinez, in the Televisa interview.

“If they have money they have to spend it. We don’t investigate where the money comes from; we live from donations. If it is ill-gotten money the church can clean it,” Godinez said. “I don’t know why they’ve made such a scandal out of this.”

Dr. Howard Campbell, an anthropology professor at the University of Texas at El Paso and author of the book Narco-Propaganda in the Mexican Drug War: An Anthropological Perspective, believes that “narcos” want to create a positive public image. “They want to play into the whole Pablo Escobar image of the benevolent social bandit.”

The Mexican Episcopate Conference (CEM), the official leadership body of the Catholic Church in Mexico, reiterated its complete and absolute rejection of these donations from organized crime.

Campbell said he visited a church built with “narcolimosnas.”

“I was in Culiacan, Sinaloa with a group of journalists and visited a church that was built by “El JT,” Campbell said. The initials stand for Mexican drug lord Javier Torres. “It was an official Catholic Church. We talked to the priest and he was a little bit evasive but in the end the story holds up – the ‘narco’ built the church.”

Another example of illegal drug profits being used to fund religion is the church of San Ignacio of Loyola in Tamazula, Durango, a small town in the marijuana growing region known as  the “Golden Triangle.” According to authorities, this region is controlled by drug kingpin Joaquin “El Chapo” Guzman.

“The pews were donated by local drug lords according to the inscriptions in them,” said Rodrigo Vera, a journalist for the Mexican newspaper Proceso.

One of the pews says donated by “Ines Calderon Q,” refering to Ines Calderon Quintero, wife of Rafael Caro-Quintero, a member of the Sinaloa Cartel. According to a report from the Drug Enforcement Agency (DEA), Caro-Quintero was one of the first persons to introduce cocaine and heroin to the United States. He is also accused of collaborating in the assassination of DEA Agent Enrique Camarena in 1984. Caro-Quintero is in a Mexican maximum security prison sentenced to 40 years for the assassination of Camarena.

Another pew says that it was donated by the family of Sandra Avila Beltran, a former beauty queen known as  “La Reina del Pacífico,” who was charged and convicted of laundering billions of dollars worth of drugs smuggled from Colombia to Mexico. In June, she was extradited to Florida and is facing charges for trafficking cocaine into the country, according to BBC News.

In 2010, Bishop Raul Vera of Saltillo told the Los Angeles Times: “They make us accomplices after the fact. A steeple built with drug money has blood gushing from its rafters.”

According to Vera, the states of Michoacán, Durango, Sinaloa, and Guerrero are the most dangerous places in Mexico for priests. Several priests have already been killed, with seven murders in the Archdioceses of Mexico alone. With this in mind, some bishops argue that before people go on to judge a priest for taking cartel money they should take into consideration the circumstances that surround the situation because many fear for their lives.

Cartel donations to the church are not a new topic in Mexico. In the 1990’s, the crime cartel of the Arellano Felix brothers (also known as the Tijuana Cartel) were accused of donating huge amounts of money to the then bishop of Tijuana, Emilio Berlie, who was able to schedule a private meeting with the Mexican Apostolic Nuncio Jerónimo Prigione.

Prigione  “thanked them for their generosity,” laughed Campbell. The cartel of the Arellano Felix may be connected to one of the most famous cold cases in recent history in Mexico.

On May 24, 1993, Juan Jesus Posadas Ocampo, Cardinal of Guadalajara, along with six others, was assassinated outside the Guadalajara International Airport. He was inside his car when he received 14 gunshots. According to CNN, government investigations concluded that he was caught in a shootout between rival cartels and was mistaken for a drug lord but no one was ever jailed for the murder.

Soon after Vicente Fox won the presidency of Mexico in 2000 the case was reopened when he promised to solve several high-profile murders. With the reopened investigation new information surfaced. Testimony from a childhood friend of Posadas Ocampo said that the Cardinal had told him he was called to the house of then President Salinas de Gortari and received death threats weeks before his murder. According to one theory, the assassination may have been planned by the Salinas de Gortari government based on allegations that a senior aide to the Mexican President warned the Cardinal to keep quiet about information that linked senior politicians with the drug trade.

“They created this evil monster out of Salinas de Gortari,” Campbell said. “After his ‘sexenio‘ there was an attempt to blame every single problem in Mexico on him. It seems more likely that the Arellano Felix ordered his assassination.”

Some wonder why neither the government nor the press have been more proactive in investigating the practice of “narcolimosnas.”

Lawyer Martinez believes the lack of investigation is politically motivated.

“Federal laws protect the church, whereas any individual might be imprisoned for a felony, a member of the clergy will only be fined. The Mexican Government does not want to have problems with the church,” said Kathya Martinez.

Alfredo Corchado, an award-winning journalist from the Dallas Morning News who is writing a book about the Mexican drug wars, said through an e-mail that narcolimosnas are “quite common” in Mexico.

“And it’s a message to the community via the church on who has the economic power there. What better way to win over a community, their loyalty and their silence through limosnas,” he added.

“Mexican mainstream media don’t cover these stories because they are part of the system; they receive other kinds of “limosnas.” Journalists who do investigate the issue are killed, so that’s another reason. And the Government doesn’t investigate because this is the least of their problems” concluded Dr. Howard Campbell.

The small luxurious church in Tezontle, Hidalgo was built next to the San Francisco cemetery, with a capacity of about 200. The church was built next to the cemetery with only one thing in Heriberto Lazcano’s mind, to be his last resting place. After his death, the body was stolen by a group of armed men who entered and threatened the personnel of the morgue in Coahuila; the body was put in a funeral car and rode off, according to Noticieros Televisa. The location of the body of Heriberto Lazcano is still unknown. “El Lazca” was aware of the fate that awaited him, but his last wish of being put to rest in the church that was built with his money is yet to come true.