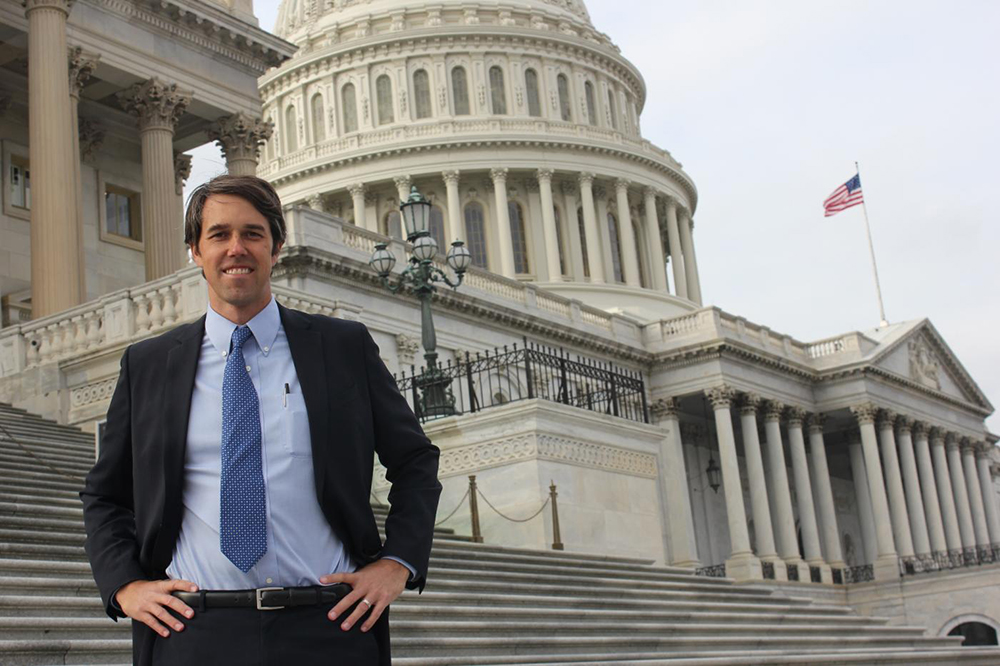 Beto O’Rourke, along with the other freshmen members of Congress, attended orientation sessions. (Kristopher Rivera/SHFWire)

WASHINGTON – Rep.- elect Beto O’Rourke, D-Texas,  in the capital this week for new-member orientation, said he was surprised with the warm welcome veteran colleagues had for the freshman class of the 113th Congress.

“The surprise has been how nice everyone has been, including incumbent members, senior leadership, and they’ve been doing a great job taking care of us,” O’Rourke said Thursday in an interview outside the Capitol. “I hope that continues, and I’m under no illusion that it will. But for right now, at least this week, it’s been really wonderful.”

O’Rourke and his newly elected Democratic peers had lunch Thursday at the Smithsonian Institution, hosted by Rep. Xavier Becerra, D-Calif. Beto O’Rourke, along with the other freshmen members of Congress, attended orientation sessions. (Kristopher Rivera/SHFWire)

O’Rourke is one of 82 new House members, pending the outcome of a few close races, 47 of them Democrats. He attended some orientation sessions with all the new members and some just for Democrats.

“They really go out of their way to welcome you and try to make sure that you understand some of the challenges ahead,” O’Rourke said. “Like your family and making sure you spend time with your family, some of the hurdles you’ll have to jump over when you first get here, some of the things you need to know about managing your budget within your office.”

O’Rourke and his family plan to live in El Paso, and O’Rourke said he will rent an apartment close to the Capitol.

“What I think is important for me to do in this job is to come up here for the votes, certainly, to build relationships with other members,” O’Rourke said. “And then to be back in El Paso as often as I can to be hearing directly from my constituents and also to be holding myself accountable to them.”

Legislative priorities for O’Rourke include reducing the high unemployment in El Paso and creating economic growth.

Part of improving the economy will start at the ports of entry and working with Customs and Border Patrol.

“Getting more CBP officers so that we can get people through our bridges more quickly and still securely, those things will create more jobs, more economic activity in El Paso,” O’Rourke said.

O’Rourke’s agenda to have an adequately staffed border is also in the works with the Mérida Initiative’s mission to build a 21st century border.

“So my job, and I’m already starting on it right now as I talk to both senior members and incoming freshmen, is to let them know how an investment in our bridges in El Paso is really an investment in their home districts and in the U.S. economy,” O’Rourke said.

As O’Rourke completes his transition to Capitol Hill and is sworn in Jan. 3, he will seek to join several committees.

Living on the border where Customs and Border Protection, trade and security all come together, O’Rourke said Homeland Security is a place where he thinks he can be effective.

Because the El Paso region is home to Fort Bliss, one of the largest military installations in the U.S., O’Rourke will seek a seat on the the Armed Services Committee.

“We want to protect the investment that’s already there,” O’Rourke said. “We’d like to make the best case of continued investment, and then when the investment occurs, we want to make sure that the local community benefits from it, so making sure that our local small businesses have an opportunity to contract at Fort Bliss, which up until now has not really been the case.”

O’Rourke is also interested in the Veterans Affairs Committee.

“Veterans Affairs is a very important committee for El Paso, considering how many veterans live in our communities,” O’Rourke said. “So I would like to do what I can to improve the level of service at the VA, and I think sitting on VA would be able to help us do that.”

During his visit to the Capitol, O’Rourke did not meet with Rep. Silvestre Reyes, D-Texas, whom he beat in the primary. But he said he did meet with Reyes on a trip to D.C. during the summer.

“I told him … I want to make sure that, even if he and I don’t have a closer or warm relationship, I’d really like to work together for the sake of the community,” O’Rourke said. “Make sure we don’t drop any constituent issues, make sure that we don’t drop any important project work that his office has been working on. I know that he cares about El Paso, I care about El Paso, so we need to be able to drop our personal differences and work together to that end.”