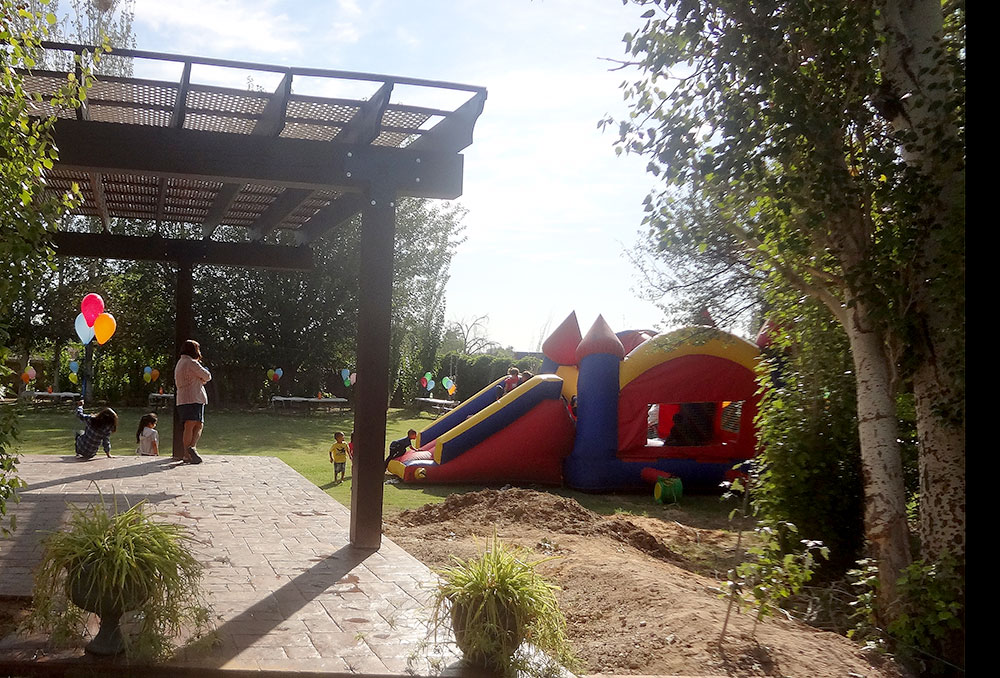 EL PASO – Children glide playfully down the red, castle-like inflated slide while others giggling dance around a grassy field decorated with yellow, blue, and red balloons.

But there is a tragic story behind each innocent smile. The annual Fall Festival held October 6th at the Reynolds Home was a time for the children there to join in fun and games at the start of the fall season. The Reynolds Home shelter opened in 1990 to provide safe shelter for homeless women and children. Some lack economic resources, others are fleeing from domestic violence.

Sonya Delgado, 39, is in charge of these children, supervising and tutoring them and simply enjoying activities with them such as watching movies. “You learn things about the children. They’re patient and creative,” Delgado said.

She was once a resident, seeking safety herself, at the Reynolds Home. “It’s a good place to live,” Delgado said. She lived at the home seven years ago when she was escaping domestic violence. She was living in a homeless shelter with her two children, now 7 and 12, when she found out about the Reynolds Home. The home helped her get back on her feet, and continued helping her even after she left.

Now a work-study student at El Paso Community College, she is studying health services. “When I finish my education, I’ll come back to help the Reynolds Home once a week.” There is no limit to how long you can stay at the Reynolds Home, but the average stay is about six months. Ivette stayed for about a year, preferring the Reynolds Home over a shelter she had stayed at before. “They helped my mom get a job and find a home.”

There a few other success stories that can be found on the Reynolds Home website. The shelter is not just a place to give women and children a place to sleep. It provides a variety of services to its residents like counseling, food and assistance after they leave the shelter.

“We meet with the women once a week, and if they need more counseling, we refer them to the Opportunity Center, where they have counseling services,” said Dorothy Truax, the director of the Reynolds Home.

According to the Reynolds Home website, women and children are assessed for their educational, physical and mental health needs. Women’s work capabilities are also assessed. They are directed to school programs, job counselors, life-skill classes, health programs, daycare and other resources in the community that are available to them.

When families leave, occasional assistance is provided in the form of food baskets or payment of rent deposits or utility bills. Assistance with transportation is also given. “If you need to go get groceries, you can. There aren’t restrictions and rules,” Delgado said in comparison to other shelters. Delgado said that the Reynolds Home was a preferable shelter, because at other shelters there would be curfews and other factors that made them less desirable.

Truax was one of 12 children and the oldest girl in her family. According to Truax, her older brother would bring homeless families to their mother who would take them in, although they did not always have room for all the families in need. “I was always into social work, starting when I was 14,” Truax said.

The Reynolds Home, named after the original owners, Truax’ grandparents, Dr. and Mrs. William J. Reynolds, was originally a farmhouse. “After my grandparents passed away, my mother inherited the farmhouse, and it was the perfect place for families.”

There are 11 mothers and 37 children currently living in the Reynolds Home, and it is at full capacity. Last year, 52 families were turned down for lack of space.  Truax said that she and others working with the Reynolds Home are working to expand the home to fit in more families. When asked about her hopes for the future of the Reynolds Home, she said, “50 years after I’m gone, it’ll still be here… I hope,” she said with a wide grin.

According to the Reynolds Home website, homelessness is a global problem with 40 percent of the country’s homeless population being families, and the number of homeless persons continues to rise. Of the families that are homeless, more than 1.3 million children a year find themselves homeless at some time.

Prior to becoming homeless, many of the families and children suffer through trauma. Homelessness worsens the effects of trauma to re-traumatize a person, which leads to damaging cycle that can be harmful to both the individual and his or her surrounding community.

Although homelessness affects persons of all ages, ethnicities, genders, and occupations, the typical homeless family consists of a single mother with two or three young children. According to the Reynolds Home website, “more than 90 percent of sheltered and low-income mothers have experienced physical and sexual assault over their lifespan.” The Reynolds Home addresses the many issues that are the combined causes of homelessness rather than just being a temporary place to stay.

Truax emphasized that the Reynolds Home needs more volunteer help and donations. The donations needed include bus tokens, laundry detergent, bleach, toiletries for the women and children, cleaning supplies, garbage bags, diapers and other infant and toddler necessities, and brooms or mops.

The types of volunteers needed include bicycle angels to keep bicycles in working condition, event planning volunteers, and those offering job options to these women. There are several other needs for handymen to make repairs and persons to help with outdoor needs. These needs are listed on the Reynolds Home website.

To volunteer or donate to the Reynolds Home, please call 915-274-2598 or visit www.reynoldshome.org/donors.