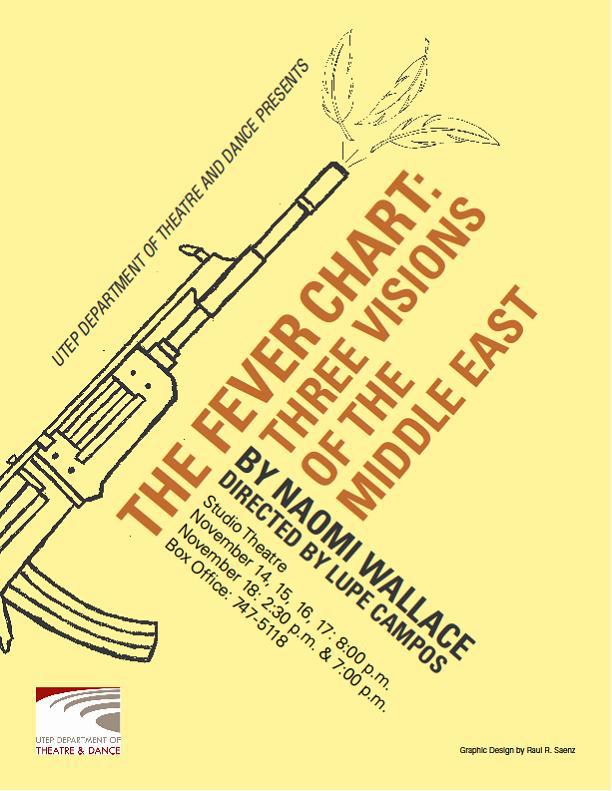 EL PASO – I am extremely content to have been part of this risky play, The Fever Chart. It changed my perspective of the Arab-Israeli conflict and I hope the production taught other young minds to not be oblivious to a continuing war that is happening this very second.

The Arabs and the Israelis have been ripping each other to threads ever since I can remember. War kills love and joy, along with piles of people. And the only question I ask myself is this. When will all this crap end? Because of a strange series of events my eyes opened a little bit more. I now feel responsible to try and make a change in the world by giving my little grain of sand to the forces of peace. It all started with me wanting to go to an audition held by the UTEP Department of Theatre and Dance.

Auditions for A Christmas Carol and The Fever Chart: Three Visions of the Middle East written by American playwright Naomi Wallace, were held around the last two weeks of September 2012. I knew what A Christmas Carol was about because I had already participated in it back in 2009, but I had no idea what The Fever Chart had to offer. The words “Middle East” told me that the play could talk about Arabs, but I had no idea to what gravity it extended its material. Still, I was very intrigued and wanted to land a role in the play because it was directed not by a professor, but by a student just like me.

I auditioned and then got callbacks for both plays produced by the University of Texas at El Paso. Two weeks later after auditions the directors posted the cast list for their respective play and posted them in the board near the green room in the first floor of the Fox Fine Arts building. Turns out I got the role of “Sami Elbaz.” I went up to the third floor and picked up my copy of the script in the offices of the Theatre Department. I read the entire play in less than an hour. After finishing it, I just sat there thinking that this was a once in a lifetime opportunity that I actually was chosen to play this character.

When I found out that I was going to play a Jew, I knew that my parents had to see the play objectively. I told them to be open-minded about the art of theatre. As an actor, I must never judge the character that I play. On the contrary, I saw my character as nothing but a human being who had problems, like most of the population in the world. A simple human being, no matter what his roots were. However, I could not forget the fact that he was also half Arab.

I began doing more research about the war between Israel and Palestine. I already knew what was has been going on for decades and decades because of my parents and grandparents. The parents of my grandfather, from my father’s side, came from Duma, Lebanon in the 1920’s to, through the state of Guadalajara, to live in Mexico. My grandmother’s parents, again from my father’s side, came from Belen, Palestine around the same time to Mexico. Both couples had children and then my grandparents met and the rest is history. I’ve known about the war since I can remember to remember. As a child I did not understand why these two sides hated each other so much. But now I more than understand the way they value land and life.

Rehearsals for The Fever Chart began October 5th 2012. I began discovering my dear fellow Sami during these rehearsals and immediately fell in love with him. I identified myself with him in a lot of ways. The advantage it gave me was that I could say everything truly on that stage, and not fake anything to anyone. It no longer mattered who was a Jew and who was an Arab, the only thing it mattered for me was for Sami.

His loneliness and child-like behavior reminded me why I love acting so much. The feeling of escapism that it gives the actor is as if he is getting high without any drugs. The rush of adrenaline running through my veins, when acting, is like nothing I have ever experienced before. Sami gave me the opportunity to view every character just as an actor needs to see them, without being biased.

Opening night had been scheduled ever since before rehearsals started. The date was November 14th 2012 at 8:00pm at the Studio Theatre in the first floor of the Fox Fine Arts Building at UTEP. This play touches places of the war that no other playwright dared to write. It is hardcore controversial and explicitly shameless. The Jews and the Muslims are like water and oil in this play, except in certain moments when the audiences stop looking at the characters like enemies and start seeing them as human beings going through tough times.

Opening night was a blast. I was nervous about how the audience would react to the end of vision number 2, which for me is the most shocking and mournful of all. This scene includes reference to sex with a child. The feedbacks I received were ambiguous because many people did not know what had been going on in the Middle East. However, the next day the audience’s opinion changed dramatically.

November 14th 2012 was the day the Israeli Government, and/or the IDF, announced the ground operation in Gaza. Meaning that they would be bombing the hell out of Gaza for the next few days. The day of opening night, Gaza finally hit Tel Aviv, after sending rockets to different parts of Israel, killing three Israeli civilians and that drove the IDF, the Israel Defense Forces, to defend their country. Actually, the IDF even announced it on Twitter as if it were just a simple social event.

On November 15, the news broke to the world in a more official manner. I heard it on NPR on my way to school. I could not believe it. Instantly, visions of innocent dead people came to my mind from both sides of the middle-eastern banks. That day, the show became a little bit more than just a show, for me it became a representation of what was happening in that instant and how people in Gaza viewed each other.

The feedback I received from this time after the show was a little bit more personal for everybody. Some said that it was Israel’s right to defend itself from those crazy terrorists. Others said it was inhumane and barbaric what is Israel is doing right now. And others still could not seem to understand the gravity of the situation. Still, young and bright audiences finally knew the truth of the situation. Finally everybody knew the pain and anguish people from both sides are going through. There have been already more than 150 dead Palestinians and some 20 Israelis. Not just soldiers but children, women, and innocent older men.

My parents and my sister watched the play and were actually happy about it. They had finally seen an American production telling the truth about the power of Israel and the shameful acts of Palestinians. They told me that they had never seen such a thing and they were both shocked and moved by the play.

As an actor, I found the human side of every single character of the play and it no longer mattered if they were Jewish or Arab. Our job at the end of the play, was to convey peace and for everybody to see that there is a possible solution to it other than war. Jews are tired of being soldiers and Arabs are tired of defending themselves with extreme measures. War kills the heart and soul of everybody who participates in it.

I did not see Sami, my character, as a Jewish Arab, but as a man who struggles through life due to the circumstances he lives in. Sami to me is a human being, nothing more and nothing less.

I pushed myself so hard to find what Sami wanted and how my actions in the play would contribute to the story. It has been the hardest work for me as an actor that I have ever had. Yet it was the most marvelous one I have collaborated in.

I hope audiences left the theatre with nothing but the truth. No masks were worn in the show; everything we said and felt was true. We actors left our hearts on stage so that the audience can also have the heart to put themselves in the shoes of these people. No one in the production team took a side in the conversations we had.

However there was one thing we were all for. We were not for the Jews nor the Arabs.

We were on the side of peace.

Editor’s note:  The following Tweets from the Israelis appeared on Nov. 14.