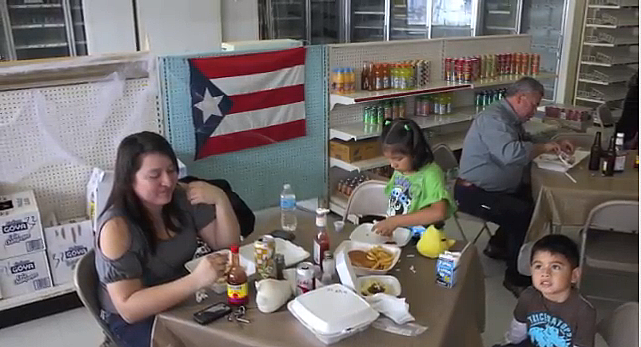 CANUTILLO, TX – At the border, a few yards before the tiny town of Canutillo becomes the busy city of El Paso, cars whiz by a run-down gas station without a second glance at the caution tape wrapped around the gas pumps, missing what many believe to be the best sandwich shop in town.

Maracas, located at 911 Talbot, is the home of the Cuban sandwich, the sandwich that made the eatery famous in El Paso. What many don’t know however is that it is also home to a vast variety of Puerto Rican food.

“I come Friday’s because he has the comida criolla… That’s the type of food I really like,” said Raymond Valles, a regular customer who was enjoying Pollo en Fricasé. Maracas owner Raymond Ortiz explained that to prepare Pollo en Fricasé, they must let the chicken marinate overnight in a stew-like marinade made with pureed vegetables. And after letting the chicken marinade, Ortiz was chopping potatoes, grabbing spices and stirring pots an hour before the “rush” came in to ensure the food he was creating was as fresh as it could be.

Ortiz, who is first generation Puerto Rican American, born in New York, said that while he has little direct knowledge about Puerto Rican food he does his research and applies it to what he does know well – food in general. For him, it’s about knowing spices, what kind and how much.

“I’m not ashamed to admit this but when people came in asking for authentic Puerto Rican food, about 75 percent of the time I had to ask ‘what is that?’ I would look on the Internet and read the ingredients for a certain dish and from there make my own.”

This added to his struggles as a first-time business owner because he had never in his life cooked for more than seven people at time. He even had to tell Puerto Rican customers that he didn’t carry what is considered authentic Puerto Rican cuisine like tostones and arroz con gandules. But he does now.

So, why Puerto Rican food? While Ortiz’s parents are both Puerto Rican, this wasn’t the reason he began cooking. In reality, Ortiz wanted something different.

“Every culture has their customs,” said Ortiz. “Mexican culture has spices that are spicy. People on the East Coast, the hottest thing they find is a jar of Tabasco. To me chili takes away the flavor.”

Ortiz also explained that in his experience a lot of people get sick from “spicy”. In Puerto Rico when people would speak ill of their family, culture or nationality they would have a chili that was marinated in vinegar brushed on their lips. In reality for Puerto Rican’s, being burnt from something spicy is a form of punishment, something Ortiz definitely doesn’t want to do to his customers. Therefore, he took the craving of the Puerto Rican community to heart and began his shop as an international food eatery.

“When we first started I was trying to do different foods; lasagnas, meat loafs and of course the sandwiches. At first it started doing really good until people started getting a hold of my sandwiches.”

As word got out about Ortiz’s garlic butter brushed French bread sandwiches, more people started converting and staying loyal to a specific sandwich; leaving everything else on the menu on the back burners. One sandwich that caught the attention of many customers was the Cuban sandwich, which was even featured in the El Paso Times.

“The Cuban sandwich is the best one. It has a little bit of everything. It has pork meat, mustard with pickles. It’s my favorite,” said Angelica Sanchez, a nurse at Las Palmas Medical Center.

The Cuban, which also contains a slice of ham and melted cheese is pressed between a French bread and generously brushed with a garlic butter sauce.

Sanchez, who was at the restaurant with her four-year-old son Roberto, decided to give a bit of the Puerto Rican food a try.

“My son is having the Stuffed Potatoes,” she said. “It’s a ball of mashed potatoes stuffed with ground beef.”

Sanchez said that at times her son is a picky eater but seemed to be enjoying the potatoes very much.

The restaurant, which contains as much a variety in food as it does in mismatched chairs and tables, strives to “shake up” people’s taste buds and encourages them to try different foods and flavor.

“As you all know the typical food out here is Mexican food. Everybody of course has a certain culture – they love it and it’s kind of hard to get someone to veer off of that,” said Ortiz. “But, it’s slowly won the people over, even vegetarians.”