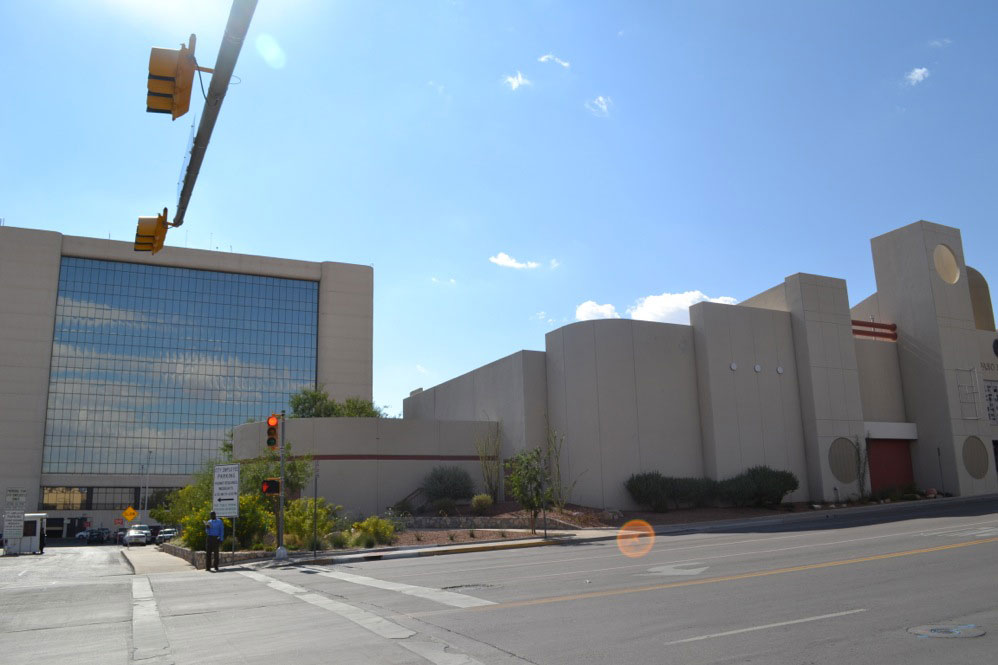 El Paso's City Hall and the Insights Museum are part of the buildings that would be demolished to give space to the new stadium. (Luis Barrio/Borderzine.com)

EL PASO – I won the bet. El Paso was the loser, along with my friend who bet Mayor John Cook would do the right thing and veto the proposed baseball stadium. The words of Henry David Thoreau in his Essay on Civil Disobedience, which I paraphrase, come to mind: Never have so few in the name of so many done so much harm. Thoreau went to jail for refusing to pay the tax to finance the war against Mexico. He realized it was a blatant land grab to extend slavery and enrich a few in Congress and members of the board of the South Carolina Railway Company that wanted a cheaper rail line to the Pacific Coast. El Paso's City Hall and the Insights Museum are part of the buildings that would be demolished to give space to the new stadium. (Luis Barrio/Borderzine.com)

Mayor Cook seems to have forgotten he was elected because former Mayor Joe Wardy represented the wealthy developers of the city who wanted to be in on the lucrative downtown redevelopment feeding frenzy. With Cook’s win over Wardy, El Paso repudiated those interests. El Paso voters sent a message with that election that in spite of all the money spent on Wardy’s reelection, we didn’t want the kind of redevelopment he stood for.

This time El Paso was betrayed by our gullible political leaders (GPL) who swallowed the line that came with the Kool Aid: Wow, Las Vegas built one. Tulsa built one too! And proponents mentioned several more cities in the pro-stadium propaganda effort fueled by the El Paso Times. The same El Paso Times that will benefit nicely ($12.25 million) from the sale of their new building to the same City Council that approved the baseball stadium boondoggle. This is an unabashed conflict of interest that only GPLs under the influence of Kool Aid (if not something else) could not see.

The hidden agenda of the El Paso Times goes back to the March primary election. The first dose of Kool Aid was served up when the paper endorsed Beto O’Rourke to unseat incumbent Sylvestre Reyes. The paper waited until after the election to publish what was evident to many – that O’Rourke’s in-laws had contributed indirectly to his election campaign through the Super Pac that targets incumbents. O’Rourke’s successful election was a clear signal for the big dollar developers to rush in with more Kool Aid.

Do our gullible political leaders (GPL) really believe progress for El Paso will come from our imitating the so-called downtown revitalization efforts of the aforementioned cities that decided to build baseball stadiums? Or that success will come by getting a second-hand team from Tucson! If these cities were doing so well, including Tucson, why would such a successful lucrative revenue-producing franchise leave for a dubious future in El Paso?

Why wasn’t the baseball stadium project, which El Paso will eventually pay for with an increase in taxes, put to a vote? Our GPLs did say why publically: they knew we would vote it down! This generation of GPLs has a track record of going against the wishes of El Paso’s voting public. Although I didn’t support the recall effort against them organized by our local religious Taliban, I cannot support elected officials who thwart the will of voters.

Of course, this is not the first time our leaders have attempted to shove a pet project down our throats. How many have forgotten lawyer Luther Jones’ International Olympic Swimming Center project that never got off the ground. Jones left behind a dubious model of civic responsibility and ethical behavior after he went to jail for conspiracy to commit wire fraud and deprivation of honest services. It seems other El Paso political figures seem to find him worthy of emulation.

What I see is a war against El Paso’s biggest cultural asset: its Mexican culture. El Paso is the most Mexican-dominant city in the U.S., which makes us unique. El Paso represents the demographics of America’s future. Unlike us, leaders of other big cities like Miami, Los Angeles, San Antonio, Santa Fe, and New Orleans proudly embrace their racial, cultural and ethnic diversity. But here, next door to Mexico, there is an undeclared (I’ll concede, maybe unintentional) cultural war against our “Mexicaness.”

Does anybody really believe tourists will rush to El Paso because we have a new baseball stadium where second-hand teams play? Make El Paso more like Tulsa and they will come! They will come because El Paso has a Wal-Mart, a McDonalds and a baseball stadium! Not likely.

Now that our gullible political leaders (GPL) have turned the city over to the developers, we can expect more efforts to neutralize our Mexican cultural stamp. As I write this essay, the new ruling class of developers is talking again about using eminent domain laws to remove the historic, immigrant-heavy El Segundo Barrio. This is the next sizeable chunk of downtown real estate for them to exploit after razing City Hall for a stadium was much easier than they expected. After drinking the Kool Aid, they had the courage to bypass the electorate.

I, along with many other El Pasoans, unlike our local free press, did not drink the Kool Aid.

I bet that Mayor Cook would cave: the temptation, the pressure, and maybe some secret backroom deals with big money buddies were too much for him. His feeble announcement of a possible “veto” of the stadium deal was only a ploy. We had already seen our entire field of GPLs (except for one opportunistic abstention) show their cards with the prior vote for the stadium. Now, the only way to express our dissatisfaction with this project is to reject any proposed tax increase to finance this project. Can we trust the GPL with any more of our tax money? Definitely not.

The stadium redevelopment project is not an exotic trick, but a well-engineered campaign to get taxpayers to pay while developers take the profits. It is a ploy by the rich and powerful, in collusion with the politicos, to depreciate downtown real estate, buy it up while it’s cheap and make a profit from construction contracts then sell the property back to the city for more tax payer money or to private interests for a handsome profit.

How is Thoreau relevant to this? He refused to pay an unjust tax that he knew would enrich so few in the name of progress. Like him, El Paso must vote NO on all the proposed new taxes in November because that money will be used to continue the culture war against Mexican-El Paso. And $12.25 million in taxpayer dollars will go to the coffers of the El Paso Times!

In the old days, someone touting a proposal like this one would have been considered a traveling salesman peddling snake oil. Now it is just Kool Aid for the gullible.

16 thoughts on “Wake up El Paso: It’s not a new baseball stadium; it’s a culture war”