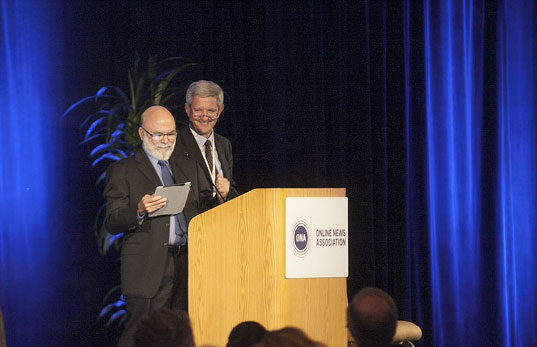 Rosental Alves, direct of the Knight Center for Journalism in the Americas, left, and mario Tedeschini-Lali, deputy director for innovation and development at Gruppo Editoriale L'Espresso in Rome, present the international OJAs. (©Brandon Weight) Rosental Alves, direct of the Knight Center for Journalism in the Americas, left, and mario Tedeschini-Lali, deputy director for innovation and development at Gruppo Editoriale L'Espresso in Rome, present the international OJAs. (©Brandon Weight)

Mario Tedeschini-Lali, deputy director for innovation and development at Gruppo Editoriale L’Espresso in Rome, and Rosenthal Alves, director of the Knight Center for Journalism in the Americas at The University of Texas in Austin, presented the awards for Non-English projects.

Alves declared Mexodus the winner by reading one of the judges’ comments – “It gives a broad and deep look at life and death issues and amazing collaborative efforts by student journalists and their teachers,” Alves said.

For months, students and professors from universities across the U.S. and México requested public records, reported and created multimedia stories that exposed the journey of thousands of middle class families who fled Mexico to escape the violent drug war. Nicole Chavez from The University of Texas at El Paso and the ONA12 Student Newsroom walks through the crowd to accept the Non-English Projects, Small/Medium Site Award for Borderzine.com. (©Brandon Weight)

Since 2008 ONA has recognized the work of journalists beyond the English-speaking world. This year it presented three awards for specific projects “trying to become even more international,” Tedeschini said.

Professional journalists from media outlets around the world such as South China Morning Post, Al Jazeera English, CNN International and MSN UK were part of the twelve judges on the Non-English categories.

Mexodus competed against two other finalists –  To Understand the Crisis by the 20minutos.es in Spain and Whisper Jokes in the GDR – Protest Off the Record, Berliner Morgenpost from Germany.

The night’s top honors went to Homicide Watch D.C. winning a Knight Award for Public Service, ProPublica for General Excellence in Online Journalism and Storify, which received the Gannett Foundation Award for Technical Innovation in the Service of Digital Journalism Site.

A complete list of winners can be found here http://newsroom.journalists.org/2012/09/22/an-evening-for-celebrating-innovation/