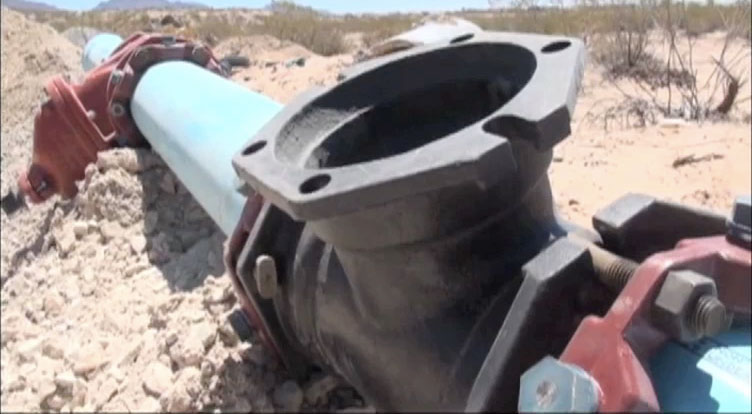 Schuman Estates will have water access by the end of August. For Mayfair Nuway the construction will be complete in December. (Nicole Chavez/Borderzine.com)

EL PASO – After more than six years of negotiations with city, county and federal authorities around 300 families in two Canutillo colonias will have potable water running in their kitchens and bathrooms by the end of the year.

Schuman Estates and Mayfair Nuway are two colonias located just outside city limits in Canutillo, a small town west of El Paso. Residents have used well-water for more than 20 years because officials did not know there was a lack of running water in the Westside colonias. The lack of clean, running water has even caused skin problems for some residents. Schuman Estates will have water access by the end of August. For Mayfair Nuway the construction will be complete in December. (Nicole Chavez/Borderzine.com)

Schuman Estates and Mayfair Nuway are only two of the more than 100 colonias in El Paso County. Colonias are located in Texas, New Mexico, Arizona and California and especially 25 miles near the U.S.-Mexico border.  Colonia residents are identified mostly as immigrant, low-income families. According to the Secretary of State, 64.4 percent of all colonia residents are born in the U.S.

Moving to a colonia is seen as an option for low-income families that cannot afford a monthly mortgage payment such as Suki Perez.

Perez, a native from Ciudad Juarez bought her property in Schuman Estates at the end of 1980s. She like many others paid for a piece of land miles outside the urban El Paso area in hopes of having a property of their own to build a home for their families.

“I wanted something spacious for my children. I used to lease and then I realized I could buy a little house. This was the best I found considering what I could afford,” Perez said.

When Perez and her children arrived to Schuman Estates it was only an empty piece of land in a dusty road and there was no electricity, water or sewer.

“I never bought a property before. When you are alone and no one gives you advice, you don’t know. After I owned it, they told me it needed an electricity pole to get all the other utilities and those will come later,” Perez said.

By buying a portion of land and building their houses in stages, residents are living their own version of the American dream. In most cases, people buy properties from private owners, who do not submit the proper documentation to provide water and electrical utilities. The property owners rarely even report that their land will be subject to residential use.

Once families move to a colonia, like Perez, they must face the reality that their homes are not connected to a public water system because they are located far from water and wastewater lines.

In 2011, El Paso Water Utilities’ Public Service Board estimated that around 5,000 people in El Paso and surrounding areas did not have access to a public water system.

“If you look back 20 years ago and saw how many people living outside city limits did not have access to high quality potable water is very different from what it is today, but we cannot deny there are still a number of people out there like the people in these Canutillo area,” said Christina Montoya, spokeswoman for El Paso Water Utilities.

Certainly, clean and fresh water is not a reality for these colonia residents. The water they use to wash dishes or in bathrooms still come from private wells and in worst scenarios it comes out dirty or does not come out at all. Residents cannot drink well water and they spend about $2 everyday for 5-gallon bottled water.

For more than six years, Border Interfaith, a religious non-profit organization, has been fighting alongside the Colonia residents to bring clean water to the area.

“Everything started when people who have lived in these colonias for more than 20 years approached St. Patrick’s priest, and told him they have contaminated water,” said Alicia Franco, member of Border Interfaith.

Since then, Border Interfaith has worked as a mediator between residents, institutions and El Paso County.

“We were able to bring people to the table; connect people in need with those able to create change,” Franco said.

According to Munzer Alsarraj, program coordinator at El Paso County planning and development department, the county has worked on efforts to provide water to these colonias since 2006. However, he said in the process of getting water different institutions at local, state and county levels participate and coordinating them takes a while.

“The project started in 2006 when El Paso County sent a letter to USDA (U.S Department of Agriculture). Then after their approval to apply we were required to set a budget and hire a consultant,” said Alsaraaj.

Poor quality of water is one of the main problems in Schuman Estates and the color and the smell of water were not enough for institutions to declare a need in the community.

Schuman Estates residents including the Perez family learned to live with the smell, bad aspect of their bathrooms, clothes ruined and even some skin problems.

“I’ve been out from my house for two months and I have seen my skin getting better, it looked bad because of the water,” said Perez.

In 2008, water tests were conducted by El Paso Water Utilities on water from a well run by Western Village Water Supply Corporation. Action was taken after colonia residents spoke with St. Patrick’s priest about the water quality.

“Some of the studies showed that some of the water was contaminated because septic tank water from the houses was seeping in the shallow well leading to the contamination,” Montoya said.

As a result a resolution was issued between the El Paso County and EPWU recognizing the need of a water system in Schuman Estates.

“That helped a lot with the application. It helped create awareness in the state that people in El Paso need water,” said Alsaraaj.

Franco said water projects in Canutillo did not move forward for years because officials were not interested. In July 2009, County Commissioner Daniel R. Haggerty led a motion to execute engineering consulting services for both water system projects to meet USDA Rural Development requirements. According to Franco, Haggerty, who never before showed interest in these colonias, was already planning to run for the 2010 November elections.

A year later, in July 19, 2010 USDA approved the project funding of approximately $1.9 million for Mayfair Nuway and $1.1 million for Schuman Estates.

After USDA approved the funding, the county had to submit a series of documents before starting the construction process.

When the construction process was about to begin, El Paso County hit a brick wall. The design for the Mayfair Nuway water project needed a portion of land from a private property next to this colonia.

“It took us 11 months to get a permission from the owner of the land to allow us to go through his property,” Alsaraaj said. “He wanted to get something in return, one of the things was getting access to I-10 from his property. We considered paying him for the easement, but he end up giving it for free.”

Schuman Estates water project will set a number of 61 water connections that will serve an equal number of families.  The project will cost approximately $500,000, less than the initial projected cost.

In the case of Mayfair Nuway, a total of 260 families will be connected to city’s water utilities, and will also cost less than initial projections.

Some may think that not all the resident in Mayfair Nuway will get water through the county water project. Right next to the Mayfair Nuway colonia are about 30 homes that do not belong to this colonia and are not identified by El Paso County as part of any other colonia or legal subdivision.

“That area is not part of Mayfair Nuway. We have no record that this area belongs to El Paso County or was platted/divided.” Alsaraaj said. “If they are legal they have to come and apply for water, we don’t know their status.”

According to Franco, people living in this area bought parts of a bigger property and settled there. The owner never kept records of residents’ payments and recently he died. Now, residents are struggling since there is no proper documentation that shows they own the land.

Currently, both projects have been delayed for more than a month due to administrative processes.

“Yes, it can be time consuming. Unfortunately the people out there have been waiting for long time, but the good thing is that is being funded 100 percent,” Montoya said.

Once the construction is done, residents at Schuman Estates and Mayfair Nuway will be only required to sign up as regular water utilities costumers paying $20 for customer account set-up fee and a $75 water bill guarantee deposit.

“It has been a long process. We won’t be happy until the machines break land,” Alsaraaj said.

In the meantime, residents continue to live their lives as any other American resident, despite their utility problems.

Perez and her children have many memories from their time living in Schuman Estates. They have hosted weddings, parties and even quinceañera parties at her property.

“We have such great memories,” she said. “My children and I could called it home.”