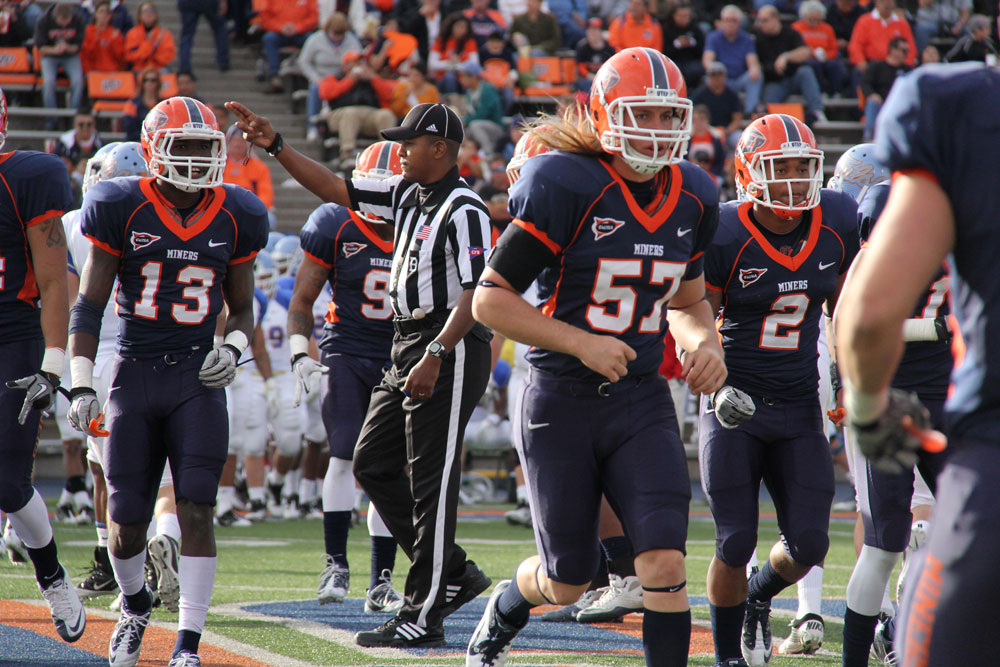 Matt Camilli at the game against the Tulsa Golden Hurricanes in November 20, 2011. (Stephanie Solis/Borderzine.com)

EL PASO — After their share of blood, sweat, and heartbreak at the Sun Bowl, four former University of Texas at El Paso football players won the opportunity to reach the next level in their careers – the NFL. Matt Camilli at the game against the Tulsa Golden Hurricanes in November 20, 2011. (Stephanie Solis/Borderzine.com)

“I have sacrificed so much for this moment and it feels so unreal,” Banyard said.”I know very few get this opportunity.”

This rise to the national professional ranks of these four players marks a milestone for coach Mike Price, since it is the largest group of ex-Miners to be signed as free agents since he has been leading the team.

“The coaches have molded me from a young man into a grown man and to have tough skin,” Banyard said.

Banyard is coming off a great senior year as a running back with the Miners. He led the team in running yards his junior year, had a 77-yard touchdown his senior year against East Carolina and was named 2011 All-Conference USA Honorable Mention for 2011. He averaged about 63 yards a game.

Kemp, a starting wide receiver, also had a memorable senior year with 23 catches for 450 yards, averaging 50 yards per game.

Banyard and Blake will sign wit the Jacksonville Jaguars, Camilli with the Philadelphia Eagles and Kemp with the Dallas Cowboys.

“I feel blessed to get this opportunity to pursue my lifelong dream,” Blake said.

Blake, the defensive back, made his first appearance on the field as a freshman. He was named All-Conference USA Honorable Mention for 2011, his senior year. He was responsible for two blocked kicks and 46 tackles during his career at UTEP.

Camilli a walk-on long snapper made quite a name for himself at UTEP, finishing his career as a three-year starter, not having a punt block in 48 attempts during his senior year.

“I’m looking forward to pursue my chance at a professional career in the NFL,” Camilli said.

As the players left the Sun City for their new lives as NFL players, they expressed gratitude to the city that gave them so much.

“I’m looking forward to pushing myself beyond my limitations,” Banyard said. “I want to learn as much as possible from this experience.”