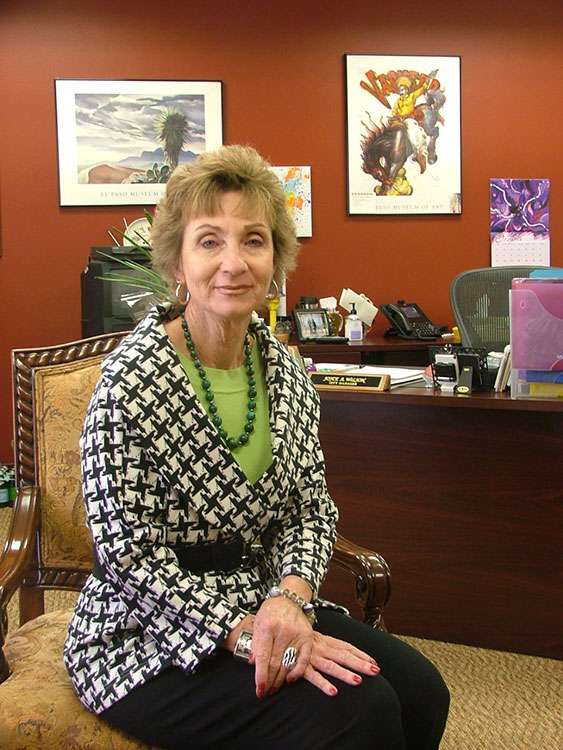 Editor’s note: This is another in a series of profiles of women of influence in El Paso. EL PASO – Joyce Wilson, El Paso’s city manager, gets up in the early hours of the morning to exercise, a calm start to most of her days before the city begins to stir.

As she works out, she thinks of her daughter who is married and has blessed her with three grandchildren.  The two older ones want to visit this summer.

Behind those tranquil thoughts, another scenario of tasks waiting on her desk is on her mind – the public transit system improvements, the storm water utility projects, and an historic downtown waiting for renovation.

And she may be thinking of the winding road that brought her to the border city as El Paso’s first city manager in 2004. Wilson, 58, received her undergraduate degree from Virginia Commonwealth University with a B.S. in Business Administration and Economics and received a Master’s in Public Administration from the John F. Kennedy school of Government at Harvard University.

“Paul Volker is kind of my hero and I used to read all of his work and some the early big things that he did, really hard things in terms of reining in inflation during the late 70s and early 80s. It was a very painful time for our country,” Wilson said. “So that’s kind of where I really wanted to go, but ultimately I didn’t and I don’t have any regrets because I got my undergraduate [degree] in business and economics so I’ve been able to apply that to local government.”

She completed her undergraduate and graduate studies after 10 years while working and taking care of her family. Wilson began working in Richmond, Virginia, in the early 1980’s where she gained a lot of experience while working for the first African American named city manager there. She was given a lot of opportunities, she said, and she learned the importance of nurturing loyalty in her staff.

“Early in my career when I was competing for city manager jobs I kind of got close but I never got the prize. Sometimes you think ‘well if I wasn’t a woman I might’ve gotten it’ but you never really know,” Wilson said. “When I got my first city manager job I was really successful, I had a great reputation, I’ve been recruited nationally by a lot of cities, so I’m pretty confident now.

“When I came here for the interview in El Paso I was one of eight people, I was the only woman… I thought ‘wow I’m probably never going to get this job’ and so when they hired me I was actually really pleasantly surprised that I became a top candidate so quickly.”

Wilson got acquainted quickly with the city, concentrating on some of the major issues, such as the improvements and stabilization of the public transit system, so important to the local economy.

High on her list were the storm water utility projects, necessary after the devastating floods of 2006 that caused severe damage to major parts of the city’s infrastructure.

“I think those are two big achievements that are transformational for this community, and neither were easy and neither were without controversy but they were really good things to serve the community for the long term,” she said.

Renovation of El Paso’s downtown is another project Wilson hopes will fulfill its expectations.  “I’m pretty excited about what has happened to downtown since 2006 when the plan was first brought forward and adopted.”

Within a time span of five years, that sector has been remodeled into a different city, she said.  There is a new history museum, a lot of public and private investment, the renovation of the building that is now the Doubletree Hotel. The Mills Plaza has been occupied with many small businesses.  Housing is beginning to appear downtown as well. Wilson also assures that there is a lot of commitment to preserve the history of downtown.

She also expects the 2012 Bond election to launch new ideas and possibilities for the community. “The council said ‘we want to do some things that are going to be really impactful and transformational, make a different to our quality of life and economic development.

“I think that’s going to be the turning point, what projects come out of that, what projects get put on the ballot and whether or not the community supports it. Because if the community supports a bold, bond initiative that could really kind of catalyze some things downtown a lot faster than might otherwise happen. I think it will really reshape a whole host of other activities.”

These accomplishments have not come without a few complexities. Wilson has had to try to keep the wheels steady on a bumpy road.

“I think the big challenge has been I’m the first city manager and I’ve been changing a governance model that has existed for many, many years until 2004,” Wilson said.

“And while in general I think the change has gone well it has not been without its pains in terms of ambiguity, about roles, who does what, concerns about who’s got the power.”

There are frustrations when implementing change in a system accustomed to more traditional ways of management, but Wilson continues to push for change despite all the difficulties.

She remains concerned with voting and hopes the community can become more aware of their government and mark their ballots in when it’s time to vote.

“Voting is the basic thing you can do in terms of your civic engagement. The fact that so little people turn out to vote basically is kind of delegating the responsibility… You have a really small group that is dictating who’s leading, what things are happening. I don’t know that that’s healthy.”

“Here it’s so easy. We have early voting, mobile voting – you can vote two or three weeks in advance. We make it so easy and yet I think the best we had was a little over 50 percent of the registered voters vote in the national election of 2008.

Wilson also oversees international affairs for the city and recognizes that Mexico is a key factor in this community’s economy.  Every year approximately 15 million people cross the border back and forth. She believes things will turn around despite the status of the world economic crisis and violence.

“Our challenge as leaders here is to really embrace the fact that we’re a bi-national region, that our economy is intertwined, that we have extensive social and family ties and relationships that we can’t ignore, not to mention that we have a lot of Mexican nationals that have relocated here, and have established businesses, bought property and are contributing to our local economy.”

Wilson has a vision of where El Paso could be in the future.

“If things continue to go in a certain direction I think this community will be transformed in the next 10 years. I think you’ll have a downtown that will be amazing, vibrant and dynamic.

“I think UTEP [University of Texas at El Paso] will be this huge campus. I think UTEP will get tier one status in the next 10 years, which will be transformational in terms of research, education, (and) economic development. The school of medicine, I think you’ll have a full-blown health science center over at the MCA area.

“Within 10 years you should have a biomedical research park coming out of the ground, a lot buildings should be functioning, there could be some major transformational businesses.”

Wilson is hopeful the situation in Juarez, devastated by drug war violence, will be stabilized so that international business will improve.

Wilson has received many awards for her work. In 2006 she was awarded the Administrator of the Year from the Texas City Management Association, Excellence in Leadership Award from the El Paso Hispanic Chamber of Commerce, Fellow with the National Academy of Public Administration.

During her tenure in Arizona she received the Arizona State “Main Street Person of the Year” award in 1997 for downtown revitalization efforts. She was also recognized by the International City/County Management Association for her efforts in Citizen Participation and International relations efforts and for excellence in leadership at an assistant level.

“The thing that I always focus on is ‘what is the right thing to do?’ It’s not about my own, self empowerment, not about me, and it’s really about the work,” Wilson said.

“What is the right thing to do and how can I use the role I’m in to make a positive impact that’s going to be long lasting and by that I mean when I leave and step down is everything going to unravel and go away or are great things going to continue.”