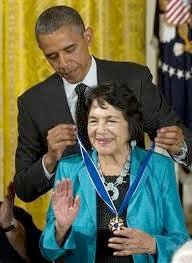 WASHINGTON – Dolores Huerta, pioneer civil rights advocate of the farm worker movement, received the nation’s highest civilian honor May 29. As 300 persons, including two of her 11 children and countless beneficiaries of her courageous work packed the White House East room to acknowledge of her legacy. President Obama awarded her the Presidential Medal of Freedom.

Supporters from as far away as Los Angeles applauded as President Barack Obama draped the medal on the 82-year-old Huerta.

The award recognizes individuals who have made “an especially meritorious contribution to the security or national interests of the United States, world peace, cultural or other significant public or private endeavors.”

“Without any negotiating experience, Dolores helped lead a worldwide grape boycott that forced employers to agree to some of the country’s first farm worker contracts,” said Obama.

“Ever since she has fought to give more people a seat at the table. ‘Don’t wait to be invited, step in there, she says.’”

On a personal note, he jokingly added, “Dolores was very gracious when I told her I had stolen her slogan: ‘Yes we can.’ Knowing her, I’m pleased she let me off easy. Dolores does not play,” he said.

Huerta co-founded the National Farmworkers Association in 1962 with Cesar Chavez. It later became known as the United Farm Workers of America. She was influential in securing the passage of California’s Agricultural Labor Relations Act of 1975.

She has been arrested 22 times and at one time she was brutally beaten by San Francisco police during a peaceful protest.

Her perseverance has been an astonishing reminder to the movement as well as an inspiration to many, including Secretary of Labor Hilda Solis.

“She has advocated for nonviolent protest and has taught people that they have both the personal power and the responsibility to work together to improve their lives. Back then, I never dreamed that I would ever meet her, let alone have the honor of calling her my friend,” wrote Solis. “I don’t know if Dolores inspired me to become a public servant, but I do know that she inspired — and insisted — that I become the best public servant I could be.”

Addressing a gathering of Hispanic media during a roundtable discussion held before the White House ceremony, Huerta cautioned that there’s still a lack of sufficient resources to compel the masses to mobilize.

“We need to take the street marches to the neighborhoods,” said Huerta. “If we don’t take political action nothing will change.”

Huerta pointed to how influential Latinos were in Nevada during the 2010 midterm elections. Senate Majority Leader Harry Reid (D) was in the political fight for his life against tea party favorite Sharron Angle.

But high turnout among Latinos is credited, in part, with Reid holding his Senate seat. She cited other examples, including the massive pro -immigrant mobilization in 2006.

“What is lacking for us? Organizing our people. There is no reason for why these laws (anti-immigrant laws) that are against us should pass.” said Huerta. “Leaders are there, but we just need the resources to go to these towns and educate the people.”

She established the Dolores Huerta Foundation, which is dedicated to developing community organizers and national leaders. Her next step is to encourage voter registration by organizing a grassroots campaign to get out the vote.

Obama expressed his gratitude to each recipient, noting that “everybody on this stage has marked my life in profound ways. He said that through his college years Bob Dylan’s music opened up his world because Dylan’ captured “something about this country that was so vital.”

He remembered reading Morrison’s Song of Solomon and, aside from figuring out how to write, he figured out “how to be.”

Raisa Camargo, a reporting fellow with Hispanic Link in 2010, is continuing her journalism studies at the University of Central Florida in Orlando.