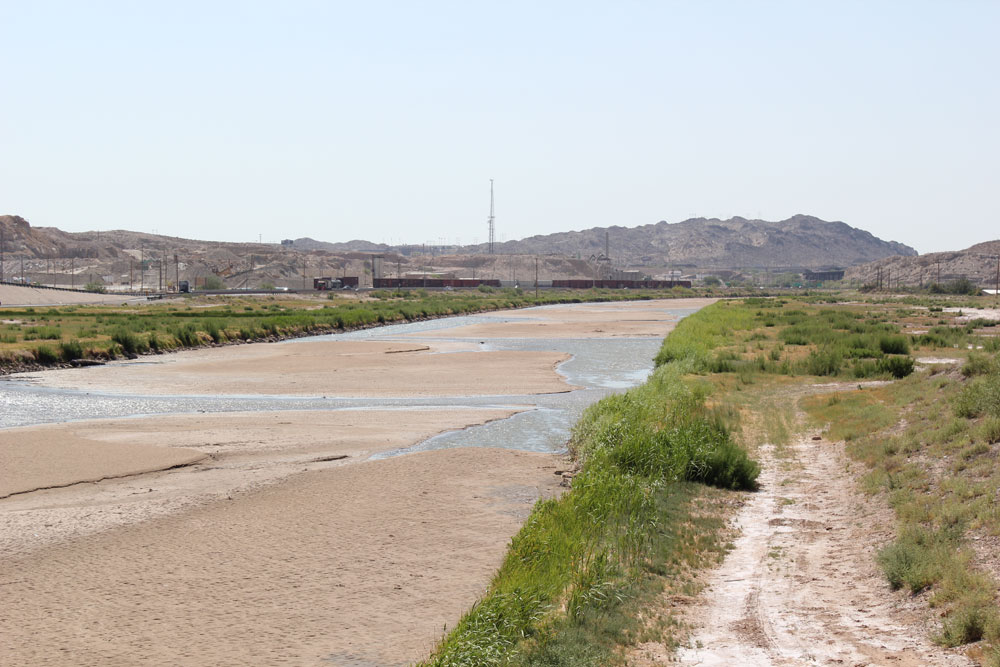 The Rio Grande has a water depth of 3 feet within El Paso. (Nick Miller/Borderzine.com)

EL PASO – The availability of water is a huge problem for desert cities like El Paso and Ciudad Juarez. While Juarez gets most of its water from underground aquifers, El Paso, during a good year, will receive about fifty percent of its water from the Rio Grande.

But this northern stretch of the Chihuahuan desert has been in a drought for the past 16 years and El Paso is not receiving the normal allotment from the river. The Rio Grande has a water depth of 3 feet within El Paso. (Nick Miller/Borderzine.com)

Currently, the Rio Grande has a water depth of only 3.19 feet within El Paso,in contrast to 1995, when water reached up to 14 feet, according to the International Boundary and Water Commission.

“You can see that the level is so low that you can actually see a discoloration of the rock because that used to be on the water and it is not longer on the water,” Padilla said.

Even though El Paso plans to receive half its water from the river, the Rio Grande is shared with other states in the Chihuahuan desert such as New Mexico and Colorado, and foreign cities such as Ciudad Juarez.

“Basically 50 percent of our water comes from Rio Grande, and the other 50 percent comes from ungrounded sources like Hueco Bolson and Mesilla Bolson,” she said.

Moreover, EPWU has other kinds of infrastructure such as the world’s largest desalination plant located in El Paso. The plant is now providing about 4% of El Paso’s water by purifying the otherwise brackish underground water.

“It’s crucial for us to conserve water all the time because we need to have enough water to meet the demand,” Padilla said.

Barbara Gomez Aguinaga does research for the Cross-Border Issues Group (CBIG), which studies North American immigration from Mexico and Central America by collecting primary data. She is a media intern at the New Mexico Immigrant Law Center (NMILC), which provides support and legal services to immigrants residing in New Mexico. She is also a reporter for the New Mexico Daily Lobo, which has a circulation of more than 10,000 copies. She studied at Tecnológico de Monterrey, Campus Estado de México, and is currently pursuing a bachelor’s degree in journalism and mass communication with a minor in sociology at the University of New Mexico.