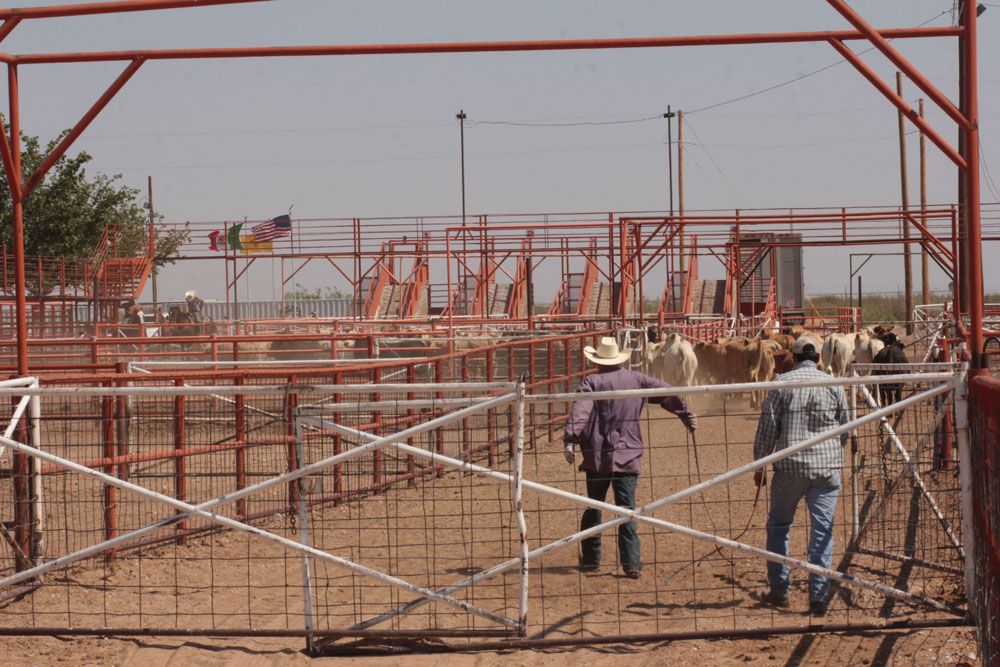 Cattle herders help push livestock into trailer trucks for shipment to other parts of the U.S. (Jasmine Aguilera/Borderzine.com)

SANTA TERESA, N.M. – Life in the borderland, as the greater El Paso-Ciudad Juárez area is called, isn’t always easy. But there’s a place west of the metropolitan area along the U.S.-Mexico border that has found a balance.

It’s the rare kind that involves a lot of dirt, a little political red tape and a few moos. Cattle herders help push livestock into trailer trucks for shipment to other parts of the U.S. (Jasmine Aguilera/Borderzine.com)

Cattle come and go from one country to the other at the Santa Teresa International Export/Import Livestock Crossing in southeastern New Mexico. The site is one of two along the New Mexico-Chihuahua border, and the exchange of livestock involves regulation from such agencies as the U.S. Department of Agriculture, the U.S. Food and Drug Administration, SAGARPA (the Mexican equivalent of the USDA) and customs offices of both countries.

Daniel Manzanares, the director of the facility, calls his operation the safest port of entry along the 1,954-mile international border.

The exchange of livestock in a controlled and enclosed area often visited by government officials is in stark contrast to what humans must go through to get to the United States. Manzanares said he feels that people not familiar with border operations buy into media reports of crime and death and drug cartels. “They don’t want to hear ‘Oh yeah, it’s perfectly safe and it’s a very good organization, it’s a very safe operation.’ That’s not news,” Manzanares said. “They want to hear 49 people were beheaded in Matamoros or something. Those are the kinds of things that freak people out.”

Manzanares acknowledges the effect of the drug cartels in Mexico, but places plenty of blame on Americans for their desire for illegal drugs.

But the only unrest at the livestock crossing is the dirt and hay kicked up by farm vehicles, cowboys on horses and cattle walking or trotting from pen to pen or from Mexico to the U.S.

Crossings happen almost daily, monitored by perhaps a single U.S. Border Patrol vehicle. Most cattle come into the U.S.; only a small percentage are exported to Mexico as breeder livestock.

It’s a “little” disease with a big name – bovine papular stomatitis – that leads to some cattle being quarantined.

That disease is similar to a common cold, Manzanares said, but because symptoms resemble the more serious hoof and mouth disease, the USDA stops the crossings until bacteria samples from the cattle can be tested. It’s usually only a few days before crossings resume.

The process of moving cattle from one side to the other involves determining which parties need livestock, grouping that livestock by name of the person receiving an order of cattle and herding the livestock into pens before it is shipped in trailer trucks.

Aundre Larrow is a third-year journalism major that loves visuals. He got a lm camera from his high school theater teacher and hasn’t looked back. Photography, design and video have taken over his eyes, and now he is constantly seeing the world dierently. At the University of Florida, he has worked as a Sta Photographer for the Independent Florida Alligator, and that has given him the opportunity to see all the sides of the Gainesville community and for that he is thankful. From basketball games to race issues in water, he has learned to take risks to show people something fresh and beautiful. Aundre’s second degree is in economics, which he has pursued in order to help him understand how the world works. He hopes to be able to use this information to properly report on community issues. His skillset is strange, yet growing and he is excited to learn. He likes Tromov of Chekhov's the Cherry Orchard, he is an a eternal student.