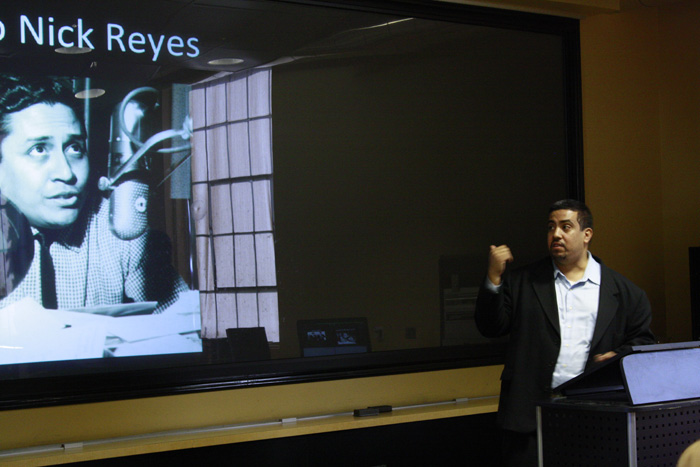 Joseph Torres, Latino journalist and author of News for all the People visits UTEP on April 17 to educate students about the history of ethnic media. (Danya P. Hernandez/Borderzine.com) Joseph Torres, Latino journalist and author of News for all the People visits UTEP on April 17 to educate students about the history of ethnic media. (Danya P. Hernandez/Borderzine.com)

EL PASO—A modern day champion for a free press, fighting to maintain and safeguard the lessons learned and taught by persons of color in the history of American journalism  made his way south to this border city.

Latino author and journalist Joseph Torres stood before students at the University of Texas at El Paso on April 17 and asked them, “Who was Ruben Salazar?”  The classroom full of aspiring young Latino journalist grew silent.

Surprised by their silence, he explained how a boy from their own border town became one of the most important Chicano journalists in the 1960’s and how his voice was violently silenced in 1970 by police in Los Angeles.

“What most people don’t know about him is that he tried to organize the Latino community and journalists to become activists to create change,” said Torres before reading a rare quote by Salazar that could be a clue to the speculations surrounding his death.

“There is much bitterness in our Mexican-American community, gentlemen. An ever increasing bitterness about school systems that psychologically mutilate the Chicano child, against certain police who habitually harass our brown brothers, against local and federal governments that apparently respond only to violence,” Torres read quoting Salazar. “Consequently there are some Chicano’s who have finally concluded that we must have a Watts type riot to catch your attention and force the establishment to pay heave.” News for All the People: The Epic Story of Race and the American Media depicts the 200 year old struggle that journalist of color have fought in the United States. (Courtesy of Verso Books)

Torres’ new book, News for All the People: The Epic Story of Race and the American Media, which he co-authored with New York Daily News columnist Juan Gonzales is full of these leaders of color who have helped shape the media world, but who are left out of the pages of most history books.

The seven-year endeavor of researching and digging up the past was not only to educate and empower people of color but according to Torres it is was also important to him that, “we tell our own stories.”

“The only images you see of us is being dehumanized and marginalized so it is hard to make progress on the issues we care about,” Torres said.

Just like Salazar, Torrez believes that media at its best can play an important role advocating for social justice, but historically it has served to divide and discriminate against people of color in the United States.

“Journalists of color are the last hired and the first fired,” Torres said refereeing to the disparity in newsrooms all across the nation where according to the American Society of Newspaper Editors the percentage of minority employees has been dropping since its peak at 14 percent in 2006.

This 400-page book traces the evolution of the media in the United States along with new technological advances from the printing press to the Internet. Torres gave examples of how the almost free distribution of newspapers was put into law by the founding fathers in the U.S., which he compared to free access to the Internet today.

He also carefully detailed the circumstances under which big money squeezed minorities out of national media and how there is a danger today that the large communication companies will take over the Internet in the same way.

His book is a recount of the important role people of color played in the development of newspapers, radio and television and how for 200 years they have been pushed aside by government backed centralized systems that have obscured the origins and purpose of the news media.

The media has always played a key role in a democratic society but Torres conveys its main purpose as, “The dissemination of knowledge.”