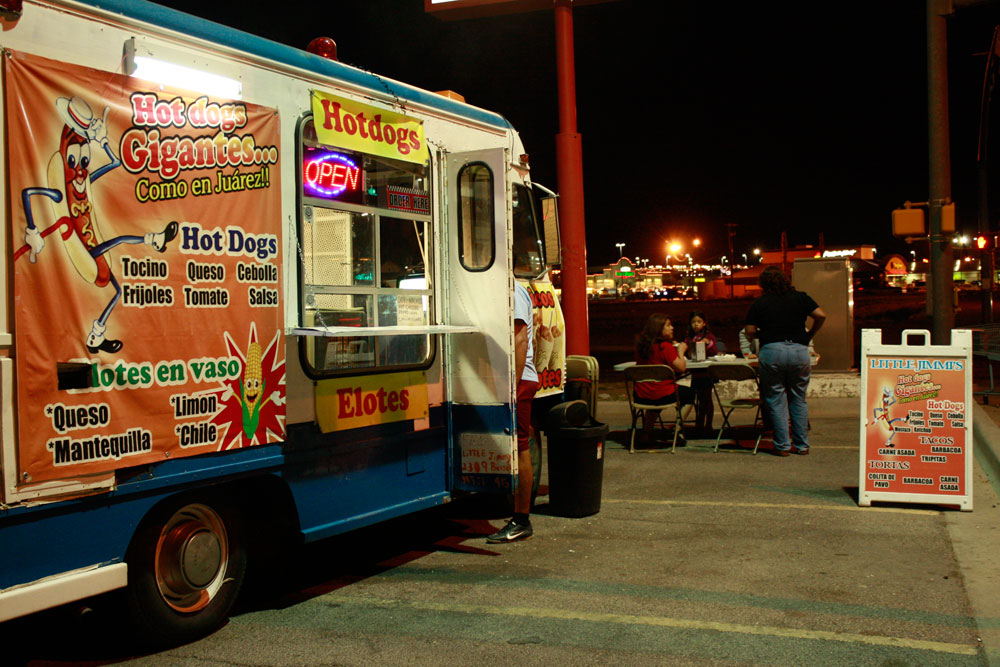 A family having dinner at Little Jimmis mobile food truck, parked at his usual spot in El Paso’s Lower Valley in front of the K-mart on Zaragosa. (Kristian Hernandez/Borderzine.com) A family having dinner at Little Jimmis mobile food truck, parked at his usual spot in El Paso’s Lower Valley in front of the K-mart on Zaragosa. (Kristian Hernandez/Borderzine.com)

[Natural sounds: Cooking food on a the stovetop inside mobile food truck]

KRISTIAN HERNANDEZ (Reporter): Mr. and Mrs. Trejo stand patiently on the side of a busy street in far-east El Paso waiting for some beef tacos they just ordered from a mobile food vendor by the name of “Tacos el Charlie” that has made this dirt lot his spot for the night.

YVETTE TREJO: You can’t really see what is in there so you are taking a chance. You don’t really know how clean they are but our experience off the trucks has always been good. I guess we are going off of imagination and pictures, how about that and hope.

HERNANDEZ:  Yvette and Raul Trejo are originally from California and are trying their first mobile food truck in El Paso after their neighbor recommended them some good tacos from down the street.

HERNANDEZ: Sometimes called a “roach coach,” mobile food trucks like this one have always dealt with this fear or stigma from their customers but it’s not easy to manage and maintain a truck like this one, explains safety inspector, David Suplasky from the El Paso Department of Health.

DAVID SUPLASKY: The biggest challenge for a mobile is that they don’t have unlimited facilities within the mobile. Water is limited; you have generators to keep their refrigeration units going…

HERNANDEZ: Suplasky has been a safety inspector for over 33 years and knows that it is a challenge to inspect these mobile food vendors he refers to as moving targets.

SUPLASKY: It’s more difficult to do what’s called a routine inspection because we don’t know where they are 100 percent of the time. It’s a moving target as an example they can be somewhere today and tomorrow they may operate at a different location.

Translation: What matters is that we are situated where you can see more people. For example, we were in that corner over there except we had some difficulty obtaining permission from the lot owner so we had to move over here. It is more hidden but we still have people.

HERNANDEZ: Said Julio Moreno, cashier and supervisor of “Tacos El Charlie,” a mobile food truck that like most are held up to the same health codes and standards as a regular restaurant. They are equipped with full kitchens, sinks, exhaust systems and adequate refrigeration but, what about the ladies selling burritos out of their van or the back of a pickup? They are not the vendors we usually imagine when we think of a food truck but are a very common sight in a city like El Paso where construction is the dominant industry.

HERNANDEZ: Christina Salinas owner of “Kristy’s Lonchera” started in 1995 out of her four door sedan with a cooler full of burritos wrapped in foil paper and a bucket full of sodas. She had to hide from inspectors and operate illegally for a while until she worked her way up to a legal status.

SUPLASKY: It’s not impossible to get a permit to operate out of a van. The consumer should look for a number that’s on the side of the vehicle and the name and address of the mobile food-vending unit. They should have lights that are not your normal lights on a van or a pickup truck. If I am equipping myself that way it’s kind of an indicator that I am following the law but I guess it is possible for someone to make up a number and just put on the lights.

HERNANDEZ: In the El Paso area there were 320 mobile permits issued in 2011 but Suplasky warns consumers that illegal operations are still very common.

SUPLASKY: I would say they indeed are very common in El Paso, illegal operations…

Translation: Yes, it is very common sometimes I see them, and well, it does make me uncomfortable but I also remember that is the way I started.

HERNANDEZ: Most vendors we spoke to admitted to operating illegally when they first started. The average startup costs for a mobile food truck can range anywhere from $30,000 to $80,000 dollars including equipment, taxes and zoning permits.

Editor’s note: This is another in our series Portraits from the border.