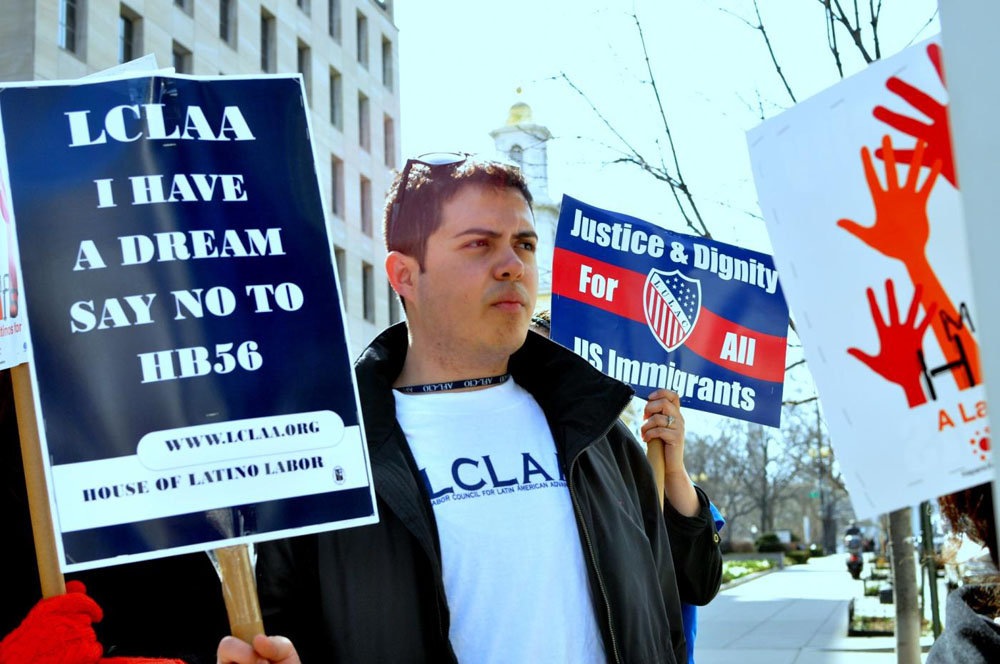 Juan Velasquez, 24, came to the U.S. when he was 14 years old and recently graduated from Georgetown University. He, along with fellow members of LCLAA, will participate in the Selma to Montgomery March this week. (Salvador Guerrero/SHFWire) Juan Velasquez, 24, came to the U.S. when he was 14 years old and recently graduated from Georgetown University. He, along with fellow members of LCLAA, will participate in the Selma to Montgomery March this week. (Salvador Guerrero/SHFWire)

WASHINGTON – Thousands of people gather in Alabama each year to re-enact the Selma to Montgomery March that took place 47 years ago. This year protesters will have not just a memory but a new cause as they march across the Edmund Pettis Bridge.

Representatives from the Labor Council for Latin American Advancement, Hispanic Federation, League of United Latin American Citizens and the National Council of La Raza held a rally here Wednesday to announce they would join the re-enactment of the civil rights march. They left after the rally for the 14-hour bus ride to Selma, Ala., to take part in the final two days of the Selma to Montgomery March re-enactment that started Sunday.

The 1965 march for voting rights ended in violence when peaceful protesters were attacked by local law enforcement using tear gas and clubs.

The Hispanic groups will march alongside civil rights leaders to demand the repeal of Alabama’s HB 56, an anti-illegal immigration bill.

“We’re fighting for the same issue that our brothers and sisters were fighting 47 years ago,” Hector Sanchez, executive director of LCLAA, said.

Juan Velasquez, 24, a recent foreign service and international politics graduate of Georgetown University and an intern for LCLAA, said joining the re-enactment of the march is a necessity to lend a voice to the workers who are affected by the law.

“This is really close to me because I am a DREAMer,” Velasquez said.” “It is important because it will highlight the plight of a segment of the population, that not only has been marginalized, but now it is demonized.”

The DREAM Act, which was defeated in Congress in 2010, would have allowed some immigrants brought to the U.S. as children to start a path to citizenship. “Civil rights today means pushing back on laws like HB-56. It is important for us to recognize that the civil rights community has embraced our immigrant brothers and sisters,” Janet Murguia, NCLR president, said. “They have understood that this represents a fundamental setback for all Americans.”

Murguia joined civil rights leaders the Rev. Al Sharpton, Ethel Kennedy, Valerie Jarrett, senior adviser to President Barack Obama, and many others Sunday as they took part in the first day of the re-enactment.

Murguia said it was an important day in the fight against inequality.

“It shows the intersection of injustice,” Velasquez, said. “It brings the community together, and it links the African American community with the Latino community to show that we’re battling the same oppression.”

Rene Dominguez, 22, of Mexico, is in the U.S. on a visa that allows him to intern temporarily for LULAC, said he has a certain understanding of the situation undocumented immigrants are going through.

“A lot of our brothers and family are living in the U.S., and I think the Latin American community should fight for the rights of people living here,” he said. “They have to be respected in their rights and in their opportunity.”