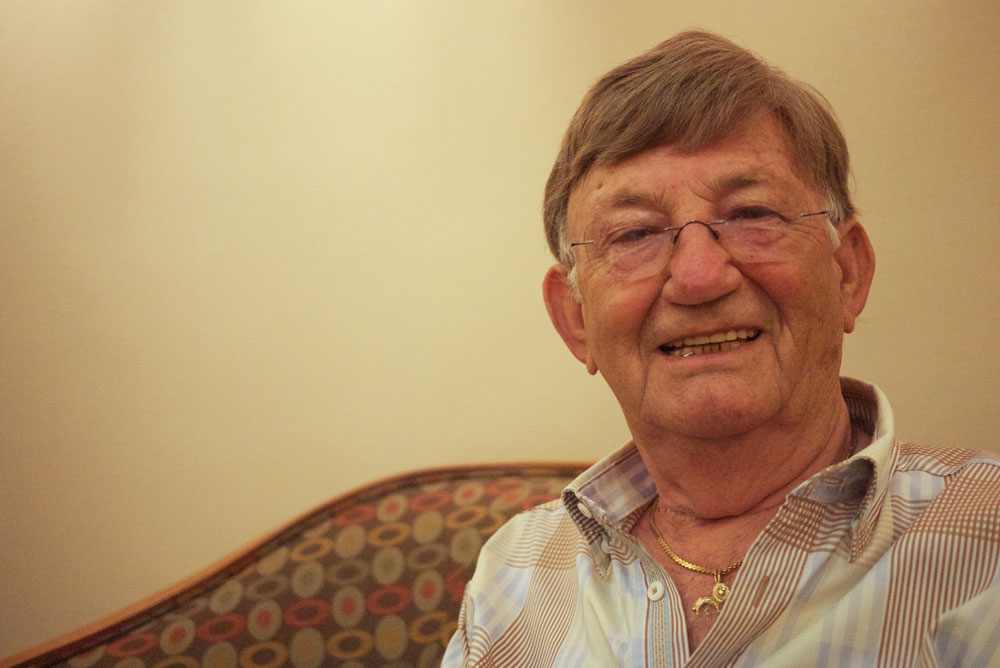 Kaplan survived four years in the Nazi concentration camps and was the only one from his family. (David Smith-Soto/Borderzine.com) Kaplan survived four years in the Nazi concentration camps and was the only one from his family. (David Smith-Soto/Borderzine.com)

EL PASO – Loud demanding voices in the darkness of the early morning disrupting too few hours of sleep and waking to find that the man next to him is now a corpse mark the start of another stressful day in the Nazi concentration camp.

Hunger pangs continually tear at his stomach as he labors in the ever-present bone-chilling cold that cuts through the filthy rags he wears.

These are some of David Kaplan’s childhood memories.

“Families were torn apart, you never knew when it would be your turn to die,” said David Kaplan, 82. He told journalism students at the University of Texas at El Paso that he felt lucky to have survived the hell he fell into when he was only 11 years old.

These memories are alien to most of us in America today, seen only in old World War II movies. Even there, the actors are too well fed to be truly representative of those who spent anytime at all behind the electrified wire that fenced these camps. Under a continual death sentence that could be carried out at any time, most of us would be reduced to mental and emotional wrecks. But there are some who seem to be able to accept the situation, adapt, and if not thrive, at least survive.

On June 14, 1940 under the provisions of the Molotov-Ribbentrop Pact Russia occupied Lithuania, Kaplan’s homeland. At the time, he was eleven years old, living in the town of Kaunas with his father, mother, grandfather, sister and brother. His father was a tailor who employed eight other workers in the creation of tailor made suits. “We lived on the upper floors of the house that contained Kaplan’s Tailor Shop,” he explained.

Even prior to the Soviet occupation his relationship with his father was strained. His father was an alcoholic who beat his wife and then life under the Soviets was harsh. “I was happy when they took him away,” he remarked during the interview. Considered wealthy, his father was ordered to stop work by the Russians, the state would provide. However, Kaplan senior disobeyed and was arrested and sent to Siberia, leaving the family to shift for itself.

In 1941, Hitler declared war on the Soviet Union and invaded Lithuania. However, even before the arrival of German troops a group of Lithuanians began killing Russians and Jewish members of the population. “The partisans attacked the Jewish section of the city and killed over 10,000 Jews,” Kaplan said. On June 22, 1941 the German military arrived in Lithuania and put a stop to the violence. However, the peace was short lived, the calm before the storm, so to speak.

Before the Holocaust, Lithuania was home to almost a quarter of a million Jews and was considered one of the greatest centers of Jewish theology, philosophy, and learning in Eastern Europe. Unlike any other Nazi-occupied countries where the Holocaust was introduced gradually beginning with limiting Jewish civil rights, then concentrating Jews in ghettos, and finally moving the Jews to the death camps, executions in Lithuania started during the first days of war.

Researchers estimate that over that 80 per cent of the Lithuanian Jews were killed before January of 1942. The surviving 43,000 Jews were concentrated in the Vilnius, Kaunas, Šiauliai, and Švenčionys Ghettos and forced to work for the benefit of German military industry. However, on June 21, 1943, Heinrich Himmler issued an order to liquidate all ghettos and transfer any remaining Jews to concentration camps. Vilnius Ghetto was liquidated, while Kaunas and Šiauliai were turned into concentration camps and survived until July 1944. The remaining Jews were sent to camps in Stutthof, Dachau, and Auschwitz. Only about 2,000–3,000 of Lithuanian Jews survived to be liberated from these camps at the end of the war.

Due to widespread Lithuanian cooperation with the German authorities, the genocide rate of Jews in Lithuania, estimated to have exceeded 95% of the Jewish population, was one of the highest in Europe. Jews were widely considered to be responsible for the previous Soviet regime and were resented for welcoming Soviet troops. Targeted Nazi propaganda exploited the anti-Soviet sentiment and increased already existing, traditional anti-Semitism.

After initially gaining some control over the country, the Germans issued an edict giving all Jews in Kaunas 18 days to move to a small area called Slobotka. This was an area where the poor Jews used to live and the Germans wanted all Jews to move to this section of town. There was not enough space for all of the Jews, but Germans insisted the Jews move into this area anyway. They were told that they could exchange their homes in other parts of the city for a place to stay in the Jewish ghetto. The Kaplan family was forced to change their home with its shop and apartments for one room that lacked water or even plumbing. This one room had to provide shelter for David, 11, his brother, who was 16, his sister who was 14, his mother and his grandfather.

“The ghetto was surrounded by chicken wire and within its confines the Germans created a police force and a fire department staffed by Jews,” Kaplan said. A Jewish professional by the name of Dr. Hellkes was placed in charge of the ghetto and was the conduit between the Jewish people and the German authorities. “Life was hard in the ghetto, there was very little food and those confined to the ghetto were expected to work at the airport getting it ready for the influx of the German troops,” he explained. David’s mother and sister worked at the airport, but his brother was too sick to work.

The Germans kept adding Jews to the ghetto until overcrowding was a very serious issue. Dr. Hellkes complained to the Germans that there were too many people in the ghetto and was told not to worry that the overcrowding problem would soon be solved. Shortly troops and buses arrived and half of those in the ghetto were loaded onto the buses and taken away to the death camps. The other half was left to continue their work. Eventually, the ghetto was eradicated and the survivors sent to the death camps.

When Kaplan was 12, he was finally sent to the camp where the Jews were divided into two groups. The group on the left, the group to the right went to the barracks. Kaplan was originally selected for death, but he claimed to be an experienced shoemaker, which got him the opportunity to demonstrate his ability. In truth, his ability was minimal, but a kind worker suggested that he shine shoes to speed up the manufacturing process.

One morning, Kaplan, then 13, was working in the shoe shop when he saw several red buses with white paint covered windows enter the compound. He watched silently as the children left in the barracks while their parents were working, were rounded up by the guards and herded onto the buses, kicking, yelling and crying. Kaplan stayed hidden in the shoe shop and was spared. The children that were taken were never seen again. When the parents came home and found their children gone, they screamed in desperation and many killed themselves on the electrified fence.

Kaplan survived four years in the Nazi concentration camps. Along with his older brother, his mother and sister, he was shipped out of Lithuania in a railroad cattle car. In Poland, on the way to Germany, his mother and sister were separated from him and were marched into oblivion. He never saw them again.

Ending up in the Dachau camp near Munich, he was assigned to carry bags of cement.  His brother only lasted three weeks, but by using his wits and taking advantage of some lucky breaks, Kaplan managed to survive until the end of the war.

When Dachau was about to be liberated by allied forces on April 22, 1945, the camp survivors were marched toward the Swiss border to be exchanged for German prisoners. One morning, the survivors awoke to find their guards gone. Eventually a Wehrmacht Major approached and told them that allied forces were not far away and they should go to the nearest town. Shortly afterward, American soldiers discovered the survivors.

Eventually, more by luck than plan, Kaplan arrived at one of the resettlement offices and received permission to be resettled in St. Charles, MO. However, en route, his destination was changed to El Paso, which became his home. The boy who had his family torn from him has now been married for 60 years and has a large extended family.

After his liberation, Kaplan said, he decided to survive psychologically as well as physically and he found it in his heart to forgive the Germans. He didn’t want to carry hatred with him for the rest of his life, he said, but he still maintains that his story should be told lest people forget the Holocaust.