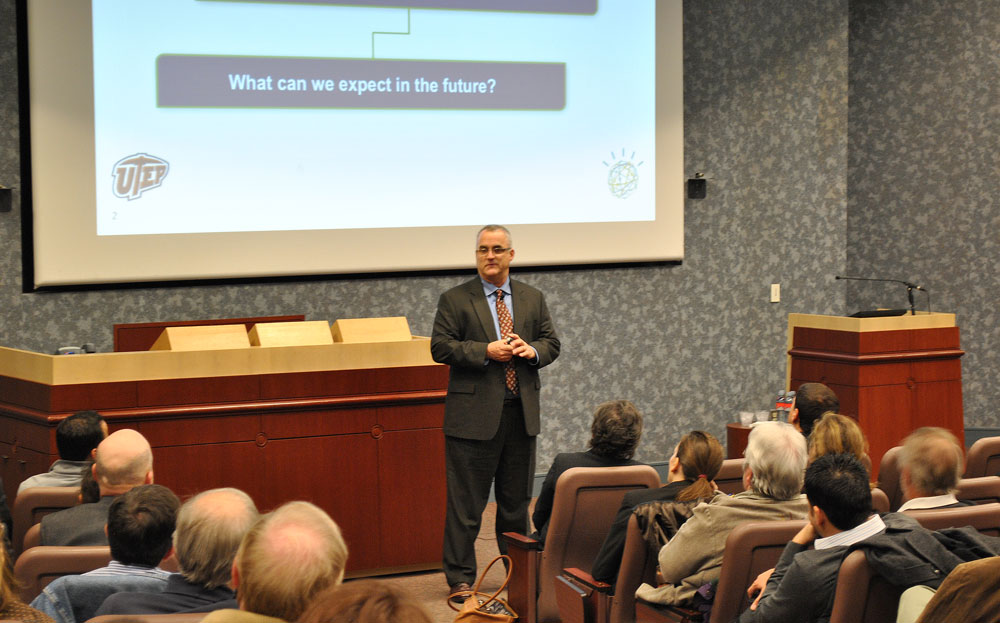 EL PASO — Imagine confiding in your computer the way you would to a friend – no mouse, keyboard, or screen – and listening to it respond instantly with accurate, reliable information. Sounds intriguing, doesn’t it? But would you trust this computer with your health?

Imagine putting a computer in an environment with minimal healthcare resources and no Internet connection, Richard Talbot, director of product line management at IBM Power Systems told students at the University of Texas at El Paso recently. “To think Watson could help a nurse diagnose an illness and guide them through a treatment or procedure,” he said. In the lecture titled “Beyond Jeopardy! Putting Watson to Work,” Talbot delved into the specifics of such a computer – Watson – and the potential it has to be a reliable tool in important industries such as healthcare.

Talbot said that Watson, the artificial intelligence supercomputer developed by IBM, defeated two Jeopardy! champions in a Grand Challenge in Feb. 2011 using only information already stored inside it, several innovative algorithms, and no internet connection.

“Watson’s success is only a small taste of the potential this technology has,” Talbot said. “We are more interested in applying [it] to more practical situations.”

Watson is the combined effort of 25 IBM scientists, operating on a system IBM calls Deep QA. It uses Natural Language Processing to figure out what the person is asking for in human terms, along with Knowledge Representation and Reasoning, which analyzes connections and relationships between words and what they mean.

Similar to a human brain, Watson also uses Machine Learning, which allows the user to confirm or correct information to make the computer more accurate.

Unlike many popular artificial intelligence programs, Watson uses Information Retrieval, which enables the computer to analyze information from preloaded databases and not rely solely on the Internet. Talbot explained that IBM will be collaborating with several universities to increase the program's reliability. (Sofia Aguirre/Borderzine.com)

“The more we work on Watson, the more it has the ability to function as part of a reliable network of technology in important industries like healthcare,” Talbot said.

He mentioned IBM has already partnered up with healthcare solutions experts at WellPoint, a company that specializes in healthcare service and products, to utilize Watson-based products as a doctor’s aid for suggesting personalized diagnoses and treatment options for patients.

The audience at the lecture was given an opportunity to ask questions regarding the future of Watson. A computer science student asked if IBM was planning to collaborate with universities to increase the program’s reliability and benefit both sides. Talbot answered that within the year IBM will partner with several universities.

Talbot also indicated that, “Some of the algorithms behind Watson are already open source and we welcome universities to utilize them.”

The most popular question, however, was whether or not Watson had the ability to become a sentient supercomputer that could put human life at risk, like HAL from 2001: A Space Odyssey. With a slight smile, Talbot assured the audience that Watson is not designed for interpretation of emotions or judgment.

“We’re very far from that. It would be more like the informational computer on Star Trek. It will always be the human in control, with Watson as a great assistant,” Talbot said.

Born in El Paso and raised in Cd. Juarez, Sofia grew up appreciating the best of both cultures by traveling frequently between the cities with her family. From an early age, she began reading anything she could get her hands on and from there developed a passion for writing. Sofia enjoys writing about the topics she is most interested in: music, technology, philosophy, and politics.

2 thoughts on “Everything is elementary for this Watson, but he’s not human”