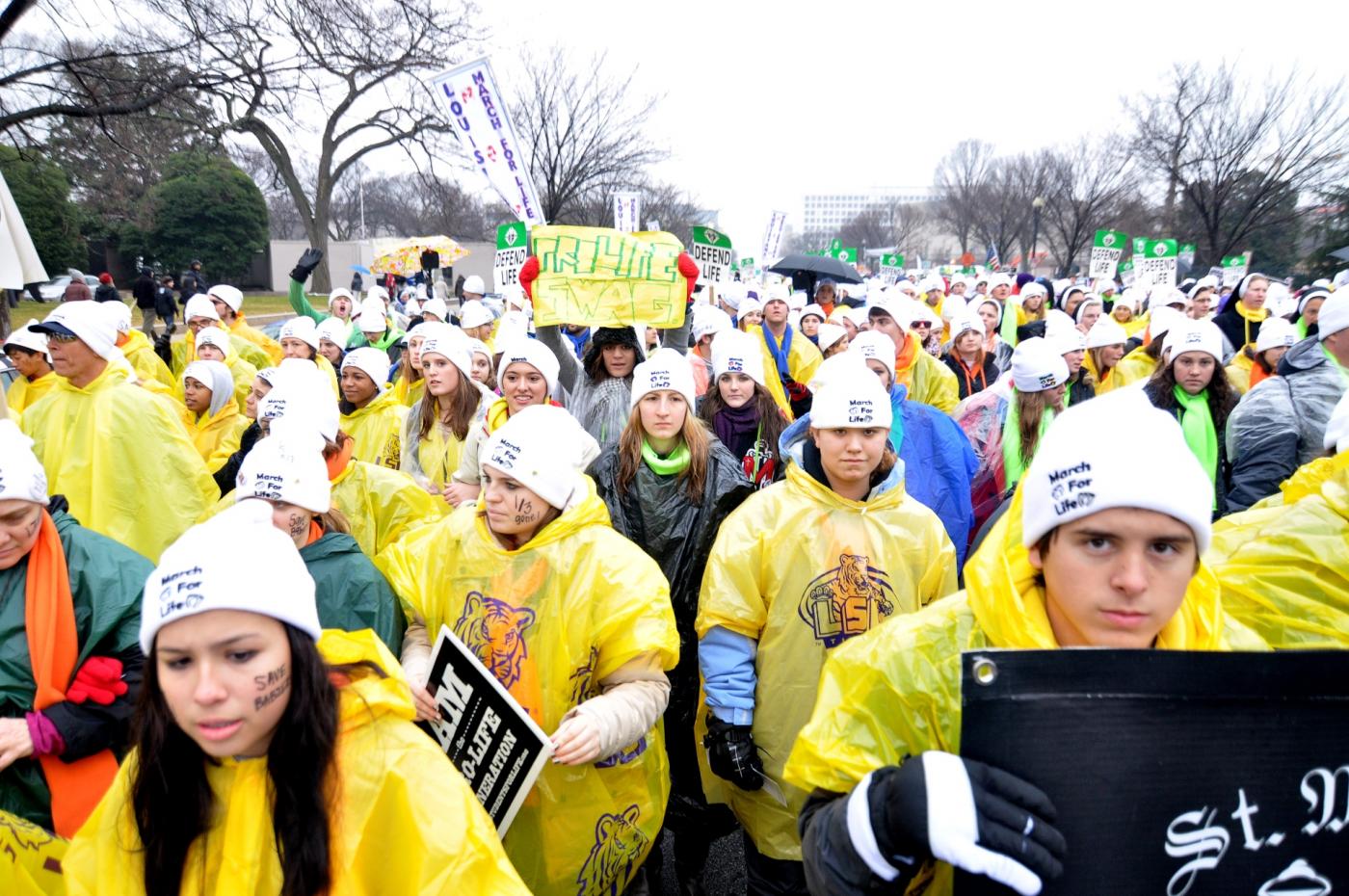 Students from Louisiana walk along the streets in Washington on Monday to protest the 39th anniversary of the Roe v. Wade Supreme Court ruling that made abortion legal. Hundreds of thousands of people joined in the annual March for Life. (Salvador Guerrero/SHFWire) Students from Louisiana walk along the streets in Washington on Monday to protest the 39th anniversary of the Roe v. Wade Supreme Court ruling that made abortion legal. Hundreds of thousands of people joined in the annual March for Life. (Salvador Guerrero/SHFWire)

WASHINGTON – For the members of the Diocese of Evansville, Ind., a trip to Washington should have been a simple 14-hour drive. A broken-down bus and 17 hours later, the trip turned into an excursion as they made their way to the capital for the annual March for Life.

“It has been a year in the making. We’ve got about 89,000 Catholics in our diocese, and to bring about 350 youth, young adults and chaperons with us is huge,” co-coordinator Emily Snipes said. “We’ve had to learn a lot of patience and endure a few things, but it has made this pilgrimage more successful.”

This is the second year in a row Snipes, family life-diocesan respect-life coordinator for Evansville, and fellow coordinator Steve Dabrowski, director of youth and young adult ministry of Evansville, planned a trip to protest the anniversary of Roe v. Wade, the Supreme Court decision that  made abortion legal in the United States.

They brought with them students and young adults from all parts of southern Indiana and Henderson, Ky.

Snipes said the journey has not been easy on them, with participants getting sick, the bus breaking down and 95 hotel rooms to accommodate 350 people.

Among them was University of Evansville senior and first-time participant Annie’Rose Martin, 21, who heard about the trip through the Newman Club at her school.

“This year it has hit me because it is a serious issue in our church,” Martin said. “I work as a summer camp counselor, and we occasionally deal with girls that have issue they are facing and we try and help.”

For some of the members who are still in high school, the rally alone is bigger than the communities they come from. Dabrowski said it is a humbling experience for most because it shows them just how large the world is.

“We know this is not going to be like a vacation. Over the course of the way, we know we won’t stay in the best hotels,” Dabrowski said. “The great thing about it was the students on the trip used it as a growing opportunity.”

Members of the Diocese of Evansville were part of a march that included hundreds of thousands of protesters from all over the country and from all walks of life. They saw only a handful of people with signs favoring abortion rights.

This was the 38th March for Life, marking 39 years since the court ruling, and the second march for Dabrowski and his group. He said this will not be the last time they attend.

“Until we are able to impress upon our government and upon all those around us that all life has dignity,” Dabrowski said. “Until the laws that compromise the value of human life are ended, we will continue to be here and show that as Catholics we are absolutely pro-life from conception until natural death.”