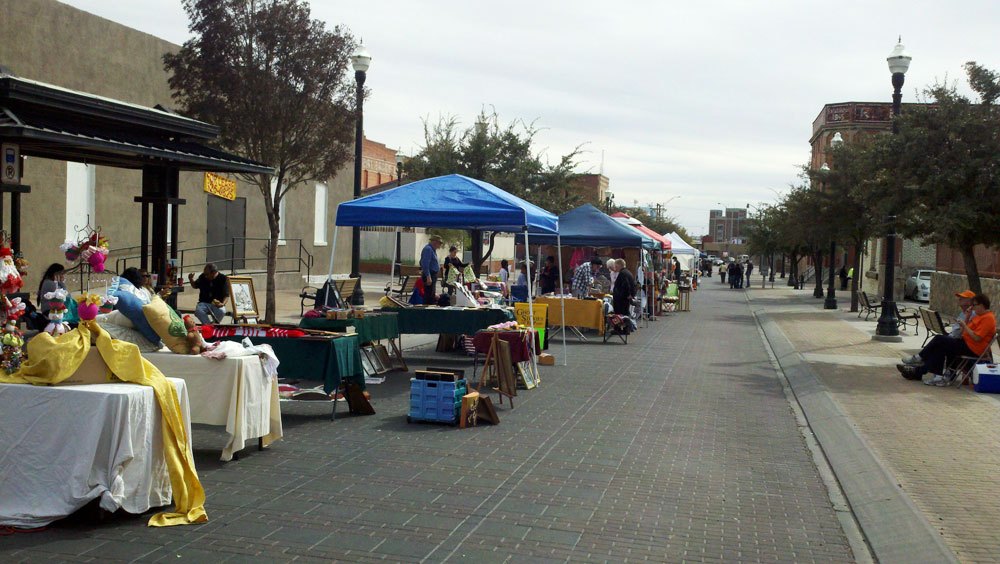 EL PASO – Local artist Carlos Rodriguez has been painting for decades, but up until late October he had never placed his art on sale in a weekly market.

With the inception of the El Paso Downtown Art Market, hosted by the City of El Paso Museums and Cultural Affairs Department (MCAD), artists can now display and sell their handcrafted art in a large exhibit area.

The art market started Oct. 29 and is currently open every Saturday from 9 a.m. to 1 p.m. at the Union Plaza District in downtown El Paso. The market was requested by the City Council based on similar art markets in Los Angeles and Las Cruces. According to Ben Fyffe, cultural programs supervisor, more vendors appear each week. For only $2, vendors can rent a spot at the market with 53 spots available each week. Because of that, a diversity of local artists with different skills and experience set up spots.

“That’s something that I really thank the city for that they’re not after the fee, per say. I think they see more the benefit of the artists coming together and creating an art market,” Rodriguez said. “With tourists, if conventions come into town, they can have a venue for them to come.”

He said he gets his inspiration from his 12-year old daughter, who may draw a stick figure that may give him an idea for a new painting. He said that his passion for art runs in his blood, since his parents were artistically inclined and he calls his calling more of a “high-calling” rather than a career. He hopes that once all 53 slots fill up at the art market, the location may turn into a go-to destination on Saturday mornings.

“It’s unique, because everything has to be produced by the artist so I figured that that’d be a great little art market,” Rodriguez said. “I love it because you can definitely come out here and mingle with other artists and sell your own little stuff.” The art market is not only for paintings like Rodriguez’, Eddie Marquez, a graduate student at the University of Texas at El Paso, was selling drawings, masks and dolls reminiscent of Dia de los Muertos. His trademark is his drawings of Dead Boy, someone based on himself, he said, that he used to draw when he worked for about one year on What’s Up magazine. Marquez participated in Chalk the Block, Oct. 14-16 at San Jacinto Plaza and said the location was ideal for the market.

“I think the area is great. I always thought this was the place to have something like this, any kind of event,” Marquez said. “I think that once people start figuring what’s going on here, it’s something good for the city.”

Another art that has made numerous appearances at the market is photography like the photos by Omar Augustine Hernandez. He and his wife went to Venice, Florence and Rome and took photos of the architecture and overall scenery of the cities in April 2011.

A graphic designer by training working for a public relations company, he said he has just acquired a knack for photography since the trip and considers it a second job now. He sees potential in the art market and says El Paso will take notice of it.

“I can’t wait until the rest of El Paso jumps on board and actually wants to come and see,” Hernandez said. “My wife was telling me that there is so much more talent just down the street that we haven’t even seen. So hopefully the rest of the city will come down and support it.”

Other vendors have tie-dyed shirts, jewelry, CDs and even DVDs for sale. The art market will run into 2012, but will be closed Dec. 31 and Jan. 7.