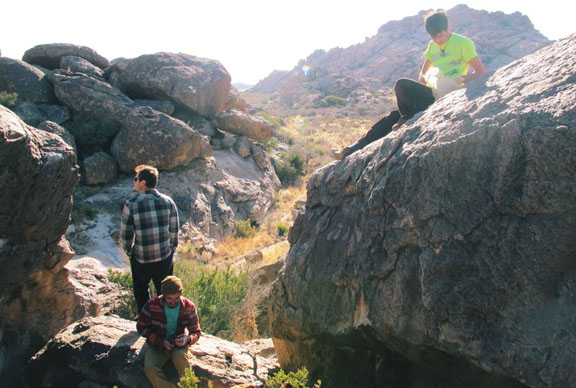 EL PASO – As it rains, explorations begin in a cave big enough for persons to stand. Darkness in the middle of the cave eventually leads to light at the other end. Outside, huge boulders loom.

Climbing the rocks and crawling through crevasses in the caves that tunnel through the boulders leads to open spaces and the discovery of new caves at Hueco Tanks State Park.

When it rains, the holes fill up to create little waterfalls that flow into one another and create babbling brooks around the area.

HuecoTanks, an historic rock canyon landscape of caves and boulders engraved with pictographs, draws hikers and rock climbers from around the world.

Park director Wanda Olzewski said visitors come to Hueco Tanks for hiking, rock climbing, and camping out under the stars. More people come during the winter months than in the summer.

Another park associate said people who come to Hueco Tanks usually come from Spain, Japan, Sweden, Germany, and other countries from around the world, and they are joined by thousands of local folks.

Native Americans believed this area was a sacred place and a sanctuary from natural disasters. They lived inside the cave-like crevasses in the boulders that kept them safe from storms and they grew crops in between the boulders, watered by the collected rainwater flowing from up above.

They painted pictographs telling stories on the walls, showing the flowers and plants from the area. Even the military expeditions passing by in the 1600s left their marks on the walls.

In this serene place people can collect their thoughts and listen to the sounds of nature like running brooks and waterfalls created by the rain.

The sounds of the screeching crickets and the birds singing echo through the canyon with a slight cool breeze.