NOGALES, Ariz. — Mexico 15, the road from Hermosillo to Nogales, Sonora is a short beautiful dive of open country with scattered pueblos and hundreds of road-side memorials; family memorials to those killed on the road. About 40 kilometers before reaching Nogales the road splits and climbs to location well-know to the locals called, “Las Curvas de Quijano” and there, remain the ghosts, “Los fantasmas del Quijano.”

I saw them, the ghosts, or so I thought, and my illusion resulted in a new fantasma “living” on this highway. What I realized later, is that he, my fantasma, was just another victim of the American drug war on Mexico at the border.

Las Curvas de Quijano are a section of Careterra Federal 15 in Northern Sonora, Mexico, about 40 kilometers from the border at Nogales. There, the four-lane road splits to north and south directions. When Highway 15 was just two lanes, many died as they sped through the curves. Panteones or tombs erected by families to remember their loved ones who have perished on the dangerous road from Hermosillo to Nogales, Sonora, Mexico. (Courtesy of George Thomson)

The twenty or so brightly painted tombs were erected by families to remember their loved ones who have perished on this dangerous stretch of Mexican highway. The tombs hold the bones of the dead and are beautifully painted with images of Jesus and the Virgin of Guadalupe.

Candles are refreshed frequently by the families, many hold fresh flowers and even toys for the deceased children. There, in these tombs, live the Fantasmas de Quijano.

But they are not alone; the same location is an ancient Hohokam and Tohono O’odham burial site and part of the special route taken each year as the Thono O’odham make the yearly pilgrimage from Sells, Arizona to Magdalena, Sonora, to pay tribute to their ancestors.

We often stop at the bright tombs to look at them or rest, we always walked away to pee to show respect for the dead.

On a recent trip to Nogales, it was a night in December, as we drove we talked of the Fantasmas de Las Curvas in disbelief.  “Who’s seen them? Who believes in ghosts?”

Then, five minutes later, we did, the tales were true. There, in front of our car traveling at 120 KPH, appeared a desperate, totally naked man, naked except for a beanie on his head, floating above road. Waving his hands in desperation for us to stop we skidded to avoid him. “¡Un fantasma!” I yelled, and we sped off.

“¡CABRON! Maneja, ¡apúrate!” gritó Jorge next to me in the front seat . Hurry, drive!

We were in shock as we sped away. We all saw him, a large man, like a bar bouncer, although not all saw him floating.

Later I told a friend about it, she said that we were crazy to think it was a ghost. “But he is now,” she said. “Don’t you know what you saw in that desperate naked man? He escaped the Narcos before they were to kill him and was desperate for help. The Narcos always strip a person desnudo before they murder. He didn’t care he was naked, he knew it was naked or death.”

She was right, maybe it was too weird for us, or that the Narcos would follow and kill us too if we let him in. But we didn’t call anyone, we didn’t go the police station until the next day, by then it was just another drug war assignation and the policía didn’t care.

Map of the site 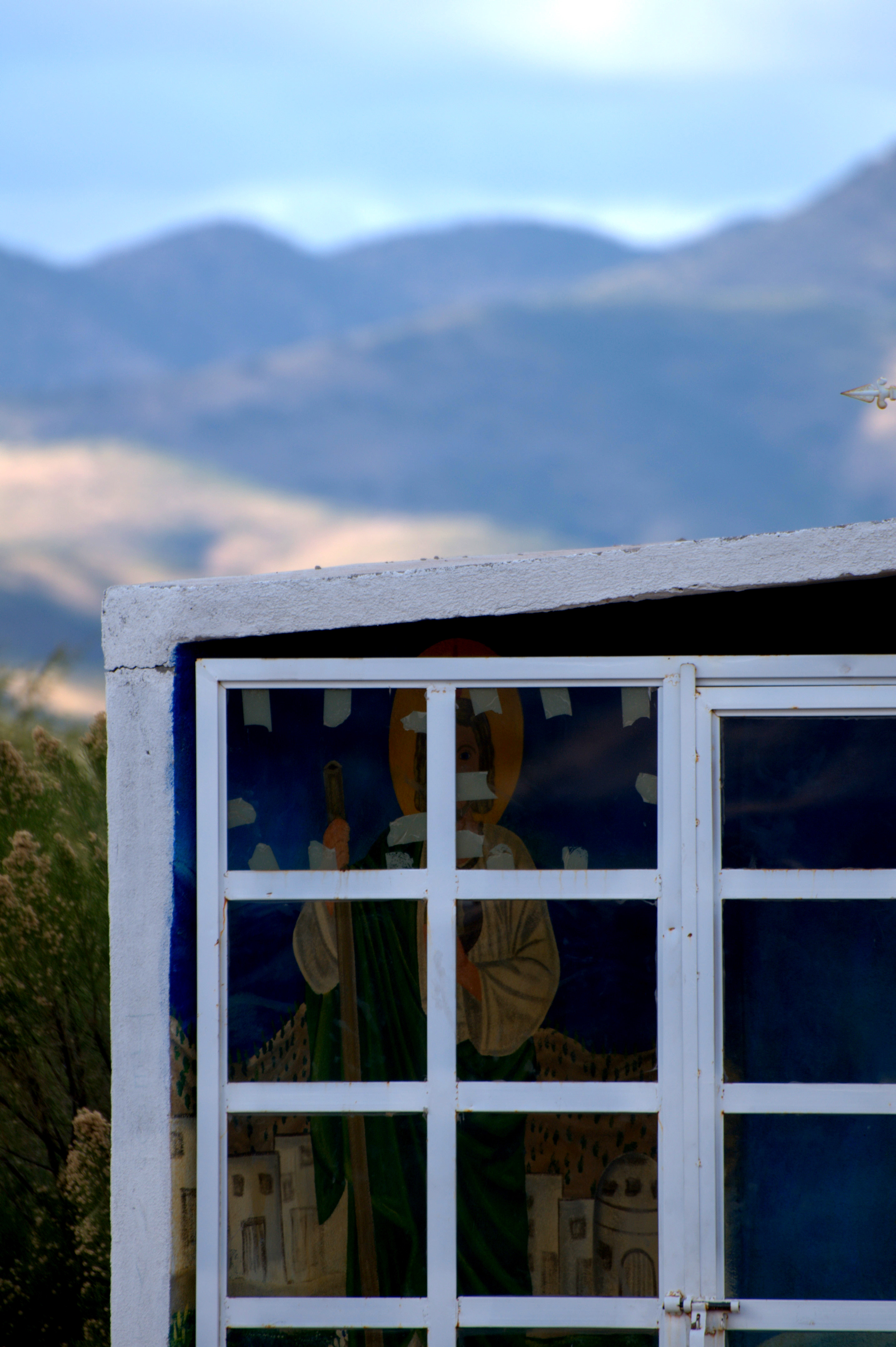 Panteones or tombs erected by families to remember their loved ones who have perished on the dangerous road from Hermosillo to Nogales, Sonora, Mexico. (Courtesy of George Thomson)