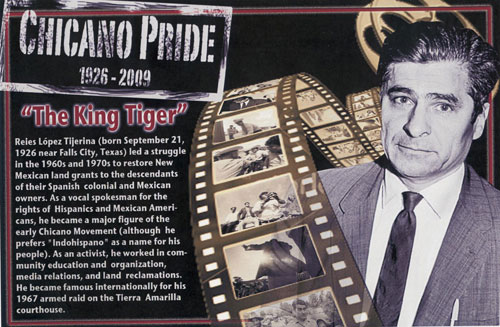 EL PASO — Reies López Tijerina, one of the most influential leaders of the U.S. Mexican-American civil rights movement was honored by the Mexican consulate here for a lifetime of work and sacrifice to protect and improve the lives of generations of persons of Mexican descent living in the United States.

Salvador Balcorta from Centro de Salud Familiar La Fe said that López Tijerina, 83, has struggled his entire life for the rights of Mexican-Americans and is still fighting for the land of northern New Mexico. “He continues to give orders to persons who normally don’t take orders from others,” Balcorta said. He is still chief of both the Chicano and Indo-Hispano movements, he said.

López Tijerina was born September 21, 1926 in San Antonio, Texas. During the 1960’s and 1970’s, he would inspire young Chicanos with his personal knowledge of the history of los Tratados de Velasco y Guadalupe Hidalgo (Treaty of Guadalupe Hidalgo).  He also founded the Alianza Federal de Pueblos Libres (Federal Alliance of Land Grants) in New Mexico to reclaim ownership of what was once Mexico’s land. The Treaty of Guadalupe Hidalgo guaranteed Mexican citizens the retention of their land grants once the U.S.-Mexican war was over.  The Alianza’s purpose was to rescue ownership of land through the courts of New Mexico, yet it was determined in a court ruling that the United States Congress was the authority on the issues of land rights based on international treaties.

Of the Four Horsemen of the Chicano Movement, Chávez and Tijerina were the most involved in grassroots community organizing. While Chávez again and again advocated non-violent protest, López Tijerina turned to militancy. He was the only one of the four to spend considerable time in prison for his actions.

In 1967, López Tijerina brought the issue of land rights to national attention when he led a raid on the Tierra Amarilla county courthouse in New Mexico.  Along with his followers, López Tijerina took up arms against the authorities.

They Called Me “King Tiger” is López Tijerina’s autobiography. In it, he archived his actions during the uprooting of the 1960’s Mexican-American Civil Rights Movement. He was the only one of the group to keep a record of his work to explain what brought him and his Federal Land Grant Alliance members to break the law. Challenging the New Mexico and national authorities, reclaiming part of a national forest reserve, and invading and taking over a courthouse won him the hearts of many young Chicano activists then and now.

El Reconocimiento “Ohtli” awards a medal, a diploma, and a plaque to those individuals that through a lifetime of hard work and dedication improved the lives of the newer generations of persons of Mexican descent in the United States in fields such as education, health, human and labor rights, and in the arts and culture.

The word ohtli comes from the native tongue Náhuatl meaning “camino” or “voyage” and this special voyage has been awarded 264 times. Rodríguez Hernández said that it is a great honor to recognize another Mexican-American. It means that the newer generations will have greater opportunity, he said.

Christina graduated from UTEP on the summer of 2009. She's currently pursuing her other passion, teaching.

26 thoughts on “Reies López Tijerina, a Chicano leader’s lifetime of achievement is honored”