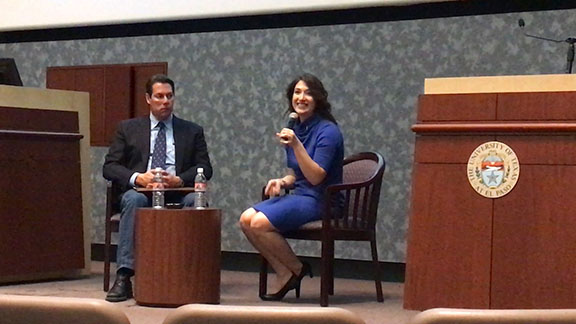 The University of Texas at El Paso hosted media innovator and former Facebook executive Randi Zuckerberg Feb. 21 at the Undergraduate Learning Center who spoke to an intimate crowd about her Jewish background and the proliferation of “fake news” during and after President Donald Trump’s successful campaign for president. During her talk to a crowd of over 100 people, she discussed a variety of topics such as the roles and responsibilities of media in people’s daily lives. She also discussed the rise of “fake” news and how we now live in a world where media’s focus has become getting the news out “faster, quicker, better and then check it later.” Zuckerberg is a graduate of Harvard University and a 2011 Emmy nominee, who has become an important figure in the world of media, having created the Facebook Live streaming video service and launching Zuckerberg Media, whose mission is to inspire tech-savvy entrepreneurial girls and women by creating content.