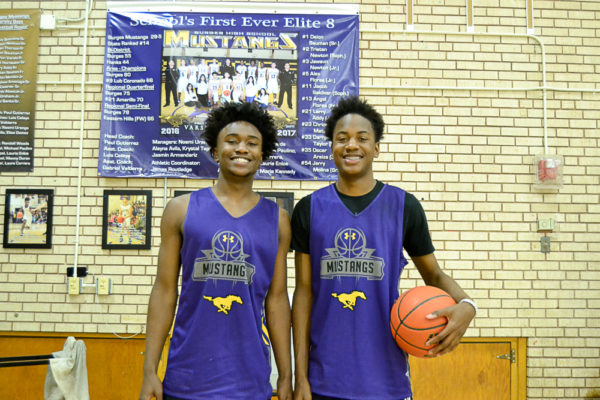 Just a few years after turning out two future NFL players who were brothers, an El Paso high school is gaining attention from college basketball scouts looking at another set of standout siblings. Burges High School basketball players Jawaun and Tristen Newton are the talk of the town and also with college coaches as they are hot prospects for Division I teams.

When the Newtons started playing for the Mustangs together, they finished 86-11 in their career – a whopping 90 percent winning percentage – and have won several district titles and have reached back-to-back regional tournaments. Jawaun, who is 6’3″ is a senior and Tristen, who is one year younger, is a 6’4″ junior. The brothers began playing together on the varsity squad in 2015. Burges was known as a football school prior to the Newton brothers’ arrival.

EL PASO, Texas — New talent may have to put their pro dreams on hold a while longer if the NBA goes on strike for the 2011 season, which would be a new example of another professional sports letdown. Unless a new agreement is reached, the second NBA work stoppage in about a decade would take place in September 2011. How will the players who are still in college feel about this situation? From my personal experience as one of these college basketball players I find the NBA lockout as a true misfortune. I can’t help but question why this is happening at the time of my graduation.

EL PASO, Texas — Dribble, swish, slam, fly and dunk. That describes Randy Culpepper —Conference USA’s 2010 Player of the Year. Although the junior shooting guard at the University of Texas at El Paso didn’t start out wanting to play basketball, Culpepper has turned into one of the best players ever to don a Miner uniform. That is a great accomplishment in itself since an array of great talent has played at the school, including Nate Archibald, Bobby Joe Hill and Tim Hardaway. Growing up in Memphis, Tenn., Culpepper originally started training as a gymnast long before touching a basketball.

EL PASO, Texas — Taking a page out of Peter Griffin’s book of “you know what grinds my gears?” is our fan base here at UTEP. Our fan base has to be one of the worst fan bases in all of sports! You ask why? Well it’s because we have a fan base that is made up of a bunch of complainers and fair weather fans. We have the only fan base that I know of, that calls into a sports show and complains about an extra surcharge on tickets.

A Miners Season to Remember

EL PASO, Tex. — As a student at UTEP for almost three years, I have never witnessed a basketball season as successful as the one this year’s UTEP team accomplished. For the first time in five years, the Miners’ regular season victories earned them an NCAA tournament bid. This season was a wild ride for the team as well as the fans. The Miners closed out the regular season with an impressive (15-2) record at home this year and an impressive (24-5) overall.

EL PASO, Texas — The charisma and the poise of El Paso basketball legend Nolan Richardson resonated in the entire room with the first few words he spoke in a deep commanding voice. “There was times when I wished I could just take my skin and just peel it off and turn white so I could be accepted because I knew I could do the job,” Richardson said. From a very young age, life was not easy for a young African American boy growing up in a predominantly Hispanic city

The former college basketball national champion coach and El Paso’s Segundo Barrio own son returned to The Sun City to keynote Black History Month at the University of Texas at El Paso and to help promote his new biography, “40 Minutes of Hell” by Rus Bradburd. Richardson addressed Miners of the past, present and future on his heritage, where he came from and how those things led him to become the sports star and humanitarian he is today. Richardson, famous for his powerful and motivational speeches delivered a message reminiscent of Martin Luther King Jr. He said King was influential in his life.