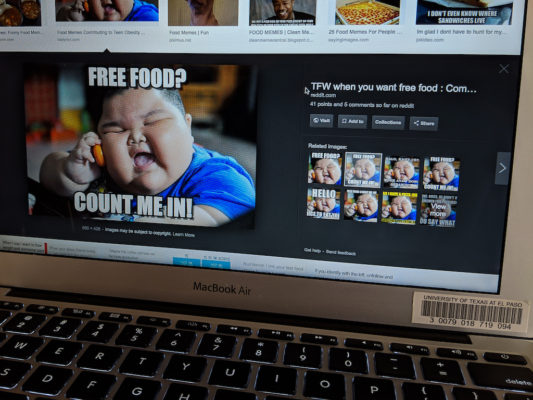 Do memes contribute to obesity among teens? Study says yes

El Paso – Nearly 20 percent of high school students in Texas are considered obese and the state ranks fifth in the U.S. for high school students who are obese, according to the website The State of Obesity. At the same time, Hispanic children in Texas have the highest rate of childhood obesity, or 21.9 percent, followed by non-Hispanic blacks with a rate of 19.5 percent and non-Hispanic whites with a childhood obesity rate of 14.7 percent, according to the Texas Medical Association. Obesity among the youth ages 10-17 accumulated a total of 18.5 percent within the state. And, for the Paso Del Norte region, almost 40 percent of residents between the ages of 18 and 29 are considered obese, and one in three of all El Pasoans are considered obese or overweight. Reasons for obesity in teens range from personal behaviors including eating habits and physical activity to genetics, according to the Centers for Disease Control and Prevention.