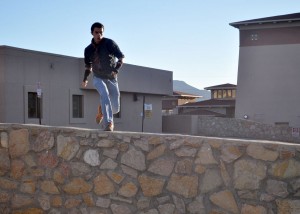 Parkour teaches students courage, self-awareness, and how to roll with the jumps

EL PASO – Everything began back at Anthony High School. George Hinojosa along with his two best friends began practicing Parkour along the school hallways and jumping over cafeteria tables gracefully. Parkour is the physical discipline of training to overcome any obstacle within one’s path by adapting one’s movements to the environment. A year later, Hinojosa now finds himself taking on more challenging barriers and obstacles, such as the break along the staircase in front of the Psychology Building at the UTEP campus. Hinojosa said he took on the practice of Parkour to feel some sort of superiority, soaring through crowds and jumping from buildings that are 10 feet high.

The rave is all about music, but some seek Ecstacy to enhance the dance

EL PASO – The dancing crowd rides a wave of lights surging to electronic rhythms while neon colors waft the wall and the crowd becomes one with the massive electro-beats as the wave becomes tsunami, flooding the hall up to eight hours at a time. The ecstasy that drives hours of nonstop dancing, typical at music festivals and raves, is sometimes fed by Ecstasy – the illicit drug. “I wouldn’t have lasted dancing, or even standing for the whole seven hours that I was there. I rolled for seven hours straight,” said Robert, 21. For many years, people have combined the music scene with drug use to increase the energy and enhance euphoria.