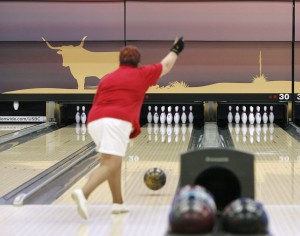 EL PASO, Texas — The United States Bowling Congress will wrap up its women’s international bowling championship on July 3 following a four-month-long tournament at the El Paso Convention and Performing Arts Center. More than 30,000 women bowlers in nearly 6,000 teams from around the world will have competed in continuous play from March 27 to July 3. A year-long conversion of the convention center for the 100-day event created 48 bowling lanes and 20,000 feet of exhibit space. The USBC allowed members of the Dow Jones Multimedia Training Academy at the University of Texas at El Paso to interview, photograph and videotape participants and events of the tournament during the week of June 7. The following video, audio and slideshow presentations are productions of the students of the academy, Kirk Notarianni, Robert Muilenberg, and Gina Germani and instructor Kate Gannon.