The National Association of Hispanic Journalists and University of Texas at El Paso researchers today are launching a national survey of Latino journalists to determine the level of job satisfaction, prospects for career development and advancement, and current working conditions amid the rapid transformation of the nation’s new media. The survey is available online at http://www.utep.edu/liberalarts/evaluating-job-satisfaction-of-latino-journalists-in-multimedia-newsrooms/

Researchers will continue to collect data through the end of December and the results of the comprehensive online survey will be presented at the NAHJ 2018 conference in Miami next summer. “We seek participation by all Latino journalists working in news media – English and Spanish, legacy and digital media,’ said UTEP professor Dr. Maria de los Angeles Flores, co-author of the study with Latino media expert Dr. Federico Subervi, and support from Zita Arocha, director of Borderzine.com at UTEP. “It is essential to identify the obstacles that Latino journalists face daily to generate dialog within their respective organizations on effective approaches to better train, retain and promote journalists of color,” Flores added. NAHJ President Brandon Benavides said the survey will improve the organization’s ability to “comprehend, assess and map the frontier of the industry for journalists at any level in their career.”

“We have made a commitment to better equip our members with tools and resources helping them to stay ahead of the curve and to do so begins with possessing a certain basis of knowledge,” he said. 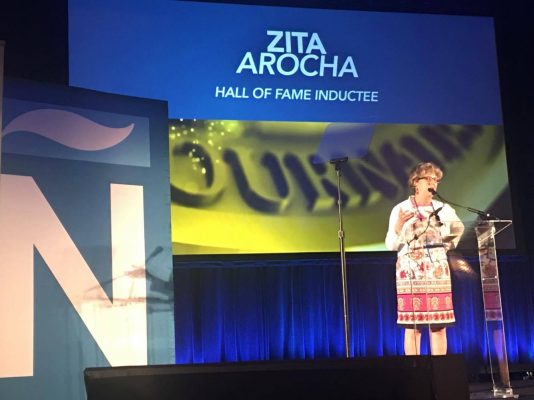 By Rene Delgadillo, UTEP Prospector
UTEP Associate Professor of Practice Zita Arocha was inducted to the NAHJ 2016 Hall of Fame on Friday, Aug. 5, for her journalism career and for serving Hispanic and Latino students. “I think it is a huge honor for UTEP because it really focuses attention on what we’ve done there over the last 14 years, and by that I’m talking about the whole team in our department,” Arocha said. “I feel really blessed and privileged to have had the opportunity to spend 14 years for preparing the next generation of bilingual, bicultural journalists. At the ceremony Arocha said, “ if you don’t know about UTEP, it’s scrappy little school on the border, we kick butt, we really do.”
Arocha, a former NAHJ executive director and current director of multimedia web magazine borderzine.flywheelsites.com, said her students give her the strength to continue each day.

EL PASO — The Chief Executive Officer of ImpreMedia, the nation’s leading Hispanic Media Company, told students at the University of Texas at El Paso that media today must inform, educate and empower communities. Born into mainstream media — Monica Lozano’s father owned the powerful La Opinion, a Spanish language newspaper in Los Angeles — she quickly realized that she would find her destiny in the field of journalism. Lozano said she trained teams of Spanish language journalists to do groundbreaking reporting, which had a lasting effect on the profession and the community. “The evolution of the Latino community and media, that is my greatest achievement,” she told a group of students and faculty at UTEP. Her professional life took a new turn in 1990 when she moved from the journalistic side of media to the business side.

Response by the Latino media to President Obama’s Jan. 25 State of the Union speech was, for the most part, a positive one, with headlines such as “Obama pide esfuerzo bipartidista para ganar el futuro,” found in Univisión.com

Univisión and Galavisión offered voice-over translation of the live speech. As did other print and broadcast media, San Antonio’s weekly La Prensa highlighted a number of issues of greatest concern to the Spanish-speaking community. It stressed, “Immigration reform and the DREAM Act are still priorities of  President Barack Obama, according to statements from the White House,” and continued, “This is the third time that the President defends the need for immigration reform in a speech before Congress.”

With education being at the top of the list as the means to “win the future,” Obama took the opportunity to mention the “hundreds of thousands of students excelling in our schools who are not American citizens.”

He urged Congress to work in harmony in addressing once and for all the issues of illegal immigration and to “stop expelling talented and responsible young people who could be staffing our research labs or starting a new business, further enriching this nation.”

In a column syndicated by Hispanic Link News Service, José de la Isla, author of The Rise of Hispanic Political Power, saw the President’s comments as “an interesting juxtaposition of student situations.”

“Had the DREAM Act passed, the ‘best and brightest” U.S. resident students it covered already would have been home” de la Isla said. In Obama’s plan for innovation, research for cleaner energy technologies plays a big role to increase job opportunities and compete with other nations.