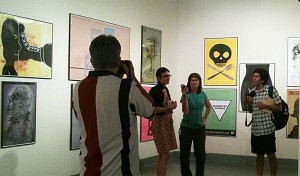 Twelve journalism professors were welcomed in early June in El Paso where the temperature hit 110 degrees. “Summer started earlier for me,” I thought. We all had been selected to participate in a multimedia training geared to journalism professors who teach in cities with a large Hispanic population. The chosen states? California, Florida, Texas and Illinois.

Investigative journalism in decline in U.S.

EL PASO, Texas — The economic gloom continues to loom over the media industry. With major U.S. media companies dealing with decline in revenue and diving into bankruptcy, news publications have been forced to cut costs to maintain profit margins. Among the hardest hit are those staff in the newsroom, particularly those involved in public investigative and accountability reporting.  During this dismal economic climate, the expense to fund a potentially lengthy, time-consuming investigative story, the reluctance to engage potential legal consequences, and their possibility to be fruitless endeavors are often the reasons why media companies are still reluctant to keep funding investigative issues, media critics say. According to the American Society of News Editors’ annual newsroom census approximately 5,900 positions were eliminated during 2008, and 5,200 full-time newsroom positions where eliminated in 2009. This means the total employment in American print newsrooms has dropped by around 14,900 since 2000.

DALLAS, Texas — So just as I am psyched up for the week I have a moment of frustration. I walk into the office and there is actually some spot news breaking in the Dallas area. This would be a great thing had I been able to cover it. Unfortunately, this coverage started a couple of hours before I was set to be in the office and another reporter was already at the press conference by the time I got there 🙁

So there I was missing the action. To make things worse, during our daily staff meeting via conference call, the Houston editor has a tendency to forget I’m in the Dallas bureau.

Time is of the essence!

DALLAS, Texas — Well, 12 weeks may seem like plenty of time. It’s really not. After working last week (week two), and getting my weekly evaluation, I’m feeling a sense of urgency to get my enterprise stories written. I have been working on one in particular that I want to wrap up. It’s been challenging getting a few details squared away, but if all goes well, I should be able to have it done next week.

DALLAS, Texas — Week one of 12 down! Well, it’s one when your job is to take a red pen to the copy. It’s another thing when the red pen is taken to your own copy. Before I graduated, I was copy editing for The Prospector so the red pen was in my hand. It’s inevitable with being a reporter that editors go over your stories with the red pen.

Day One With the AP

Internship Blog
DALLAS, Texas — Well, I survived the first day. It started out routinely enough, I left way too early in the morning to make sure I wouldn’t arrive late. Driving on 635 in Dallas can be slow at best during rush hour so now I know how long it takes to get to work about 15 minutes early and not almost an hour early (unlike today). I met mostly everyone in the bureau and was happy to find that my colleagues have good senses of humor. —Newsrooms can be intense and it’s great when people can find a little humor in the small stuff.

EL PASO, Texas — It is The Prospector tradition that the graduating seniors write a goodbye column.  So, now that my time here at UTEP is coming to a close, I can’t help but take a look back at my journey. Years ago, if anyone asked me what I was going to do with my life, I would not have had an answer. But now that I am graduating, I am excited to say that I have an answer to that question –a journalist. There are many people out there that will say that journalism is a dying field and that the odds of finding a job are slim. The truth is that journalism is an evolving field and this is a very exciting time to be entering the workforce.

Making The Most Out Of It

EL PASO, Texas — Every semester we hear from our teachers as well as guest speakers that internships are vital if you ever want to land a job. Most companies will not hire anyone unless they have some kind of previous experience. As journalism students, we have chosen a career that can be very tough to break into. To make it in this business you have to stand out. You prepare yourself to be the best, to be ready to for the better job opportunity down the road.

COVERAGE OF LATINOS
Although the Hispanic community is receiving news coverage in major media outlets, the information listeners and readers receive is often “event-driven,” with Hispanics just one of many elements. An analysis by the Project for Excellence in Journalism and the Pew Hispanic Center covering Feb. 9-Aug. 9, 2009, found that 18% of the stories studied (645 out of 34,452) “contained substantial references to Hispanics. The nomination of Sonia Sotomayor to the U.S. Supreme Court gained the most news coverage, followed by the Mexican Drug War, H1N1 outbreak and Immigration.