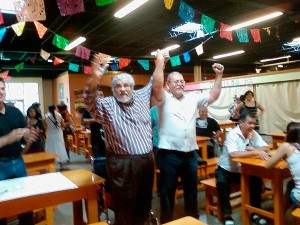 The Raza Unida Party returns to ‘la lucha,’ calling for Hispanic unity in the 2012 elections

EL PASO – La Raza Unida Party gathered here in the same city where its first convention took place 40 years ago calling for Hispanics to unify with renewed vigor at a time when their vote is of critical importance in the 2012 presidential elections. “The question is how we control our destiny,” said José Ángel Gutiérrez, 68, a founding member of the party, a lawyer and a longtime leading Chicano activist. The roots of the Raza Unida Party, created to organize and empower new generations of Hispanics, date to the late 1960’s when Hispanics students at Crystal City Texas High School were excluded from some of the extracurricular activities. The discrimination led to student protests and walkouts. Gutierrez soon found himself advising them.