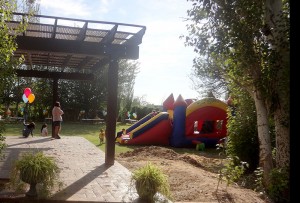 The homeless and abused find shelter and support at Reynolds Home

EL PASO – Children glide playfully down the red, castle-like inflated slide while others giggling dance around a grassy field decorated with yellow, blue, and red balloons. But there is a tragic story behind each innocent smile. The annual Fall Festival held October 6th at the Reynolds Home was a time for the children there to join in fun and games at the start of the fall season. The Reynolds Home shelter opened in 1990 to provide safe shelter for homeless women and children. Some lack economic resources, others are fleeing from domestic violence.

The Invisible Tragedy of Homelessness

EL PASO, Texas — Homelessness has been an ongoing problem for many years in the United States, and many only see what’s on the surface, a person usually begging for spare change. The unseen reality is that in the United States about 3 million people are homeless and the recession will leave about 1.5 million more people without a roof over their heads over the next two years, according to The National Alliance to End Homelessness. The stereotype of a homeless person is someone who is too lazy to get a job or is a drug addict. Although there are people who choose to be on the streets and there are those with a serious dependency problem, about 41 percent of those who are homeless are families and about 1.5 million children were homeless just last year according to the National Center of Family Homelessness. “The homeless are as diverse as the rest of the population,” said Dr. Randall Amster, professor of Peace Studies at Prescott College and executive director of the Peace and Studies Association.