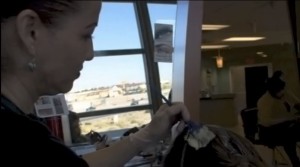 EL  PASO – Juliana Jimenez was shaved bald after giving herself a terrible haircut when she was five years old. At 17 she sprouted gray hair, which prompted her to start applying color. After that, she regularly cut, colored and styled her own hair. The youngest of eight children, she says she was just trying to distinguish herself from her siblings. Her interest in cosmetology grew during the seven years she worked at J.C. Penney in downtown El Paso.