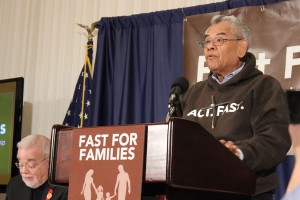 WASHINGTON – Four activists for immigration reform are taking their cause on the road. They will board a bus Tuesday and urge people in 100 communities around the country to fast with them until Congress passes immigration reform. “We are going to be asking the American people to join us in fasting,” Eliseo Medina, international secretary-treasurer for the Service Employees International Union, said. “Judging from what happened in December, I think we are going to have tens of thousands of people joining us.”